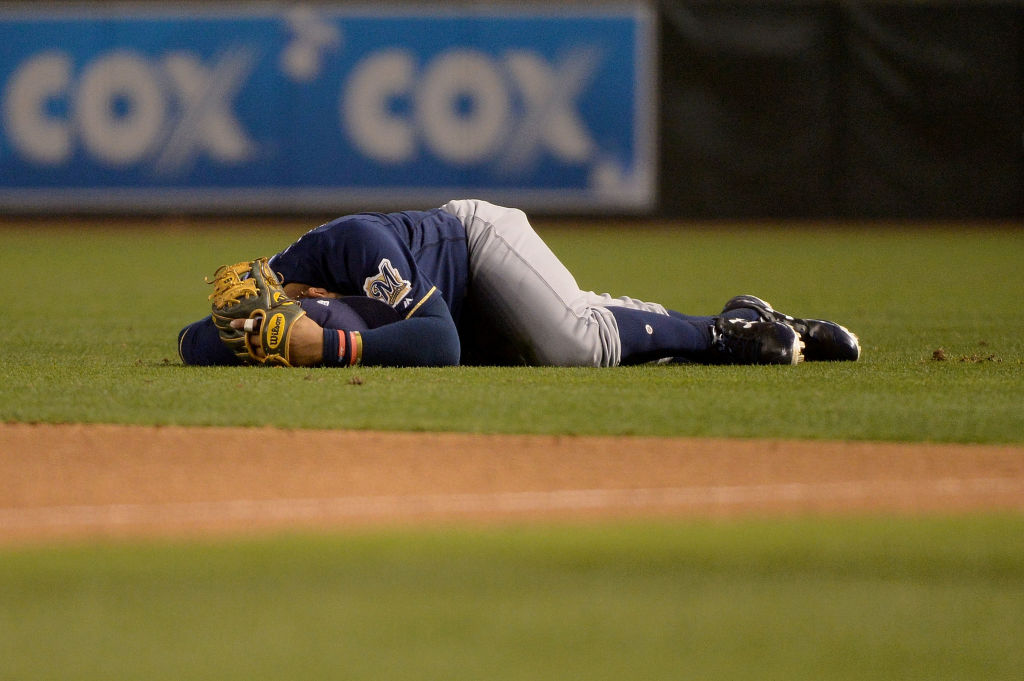 Highly-Touted Prospects Make Their Debuts: Brewers fans got a chance to evaluate Lewis Brinson, Brett Phillips, and Josh Hader at Brewers On Deck 2017.  Phillips seemed to be a life-of-the-party type while Brinson was soft spoken and amiable.  Hader also seemed pleasant, although the most memorable thing about him is his bushy hair.  Brinson had a better Spring Training than Phillips, but both have been productive in Triple-A Colorado Springs.  Hader’s Spring Training was unremarkable, and his Triple-A numbers are nothing to write home about, but that’s Colorado Springs for you.

Last week, a rash of injuries and a family medical situation created the opportunity for all three players to make their MLB debuts.  Phillips got his first hit out of the way quickly against the Giants (also his first error, but never mind that).

Hader and Brinson didn’t have a chance to play until the Diamondbacks series.  Hader put up a zero in the seventh inning and recorded his first strikeout.

Brinson batted in the leadoff position yesterday, drawing his first walk, stealing his first base, and stranding his first runner at third base.  Game of failure and all that…

It was a pleasure to watch the ecstatic reactions of their families, which took the edge off another below average week in the win-loss record.

Bullpen Bullcrap Grows Tiresome: As JSOnline writer Tom Haudricourt has observed, the 2017 Brewers were not expected to be leading their division in June, and the bullpen was built accordingly.  But the bullpen’s league-leading 18 losses have been brutal.  It’s great that the Brewers have been in every game (as the FS Wisconsin broadcast team likes to remind us), but it’s gotten ridiculous that the bullpen consistently lets games get away.

Three of the four losses last week included bullpen meltdowns.  On Monday, Rob Scahill and Neftali Feliz gave up five runs in the eighth and ninth innings (to be fair, two were unearned against Feliz).  On Thursday, after the Brewers had scored two runs in the ninth to tie the game, Jacob Barnes coughed up four runs in the tenth.  Yesterday was the most humiliating of all, with Carlos Torres, Wily Peralta, Scahill, and Feliz combining to serve up four homers and ten earned runs total.

This is no way to go through life.  To think, if the Brewers were performing down to expectations, sitting four games under .500 like they were this time last year, this would be a relatively minor well-what-did-you-expect annoyance.  Apparently this is the downside to over-performing.  Truly, every silver lining has a cloud.

Jonathan Villar: A frequently frustrating player, Villar put himself on the DL with this spectacular play.  For that he deserves some love.

In this finally the week when the Brewers slip back below .500 and drop out of first place in the NL Central?  I assume most fans have been mentally preparing for at least one shoe to drop, and a four-game series in St. Louis is pretty ominous.  The Brewers finally won a series against the goddamn Cardinals last month, thanks to a rain-out that is being made up as a doubleheader tomorrow.  If they are able to survive that series, a seemingly easier test against the last place Padres at Miller Park follows.  No one likes it when fans expect their team to fail, but the Brewers have barely been keeping their heads above water for the last few weeks.  They have surprised us so far, though.  Gah, I just don’t know what to feel anymore.