Every Time Sidney Crosby Was So Extra 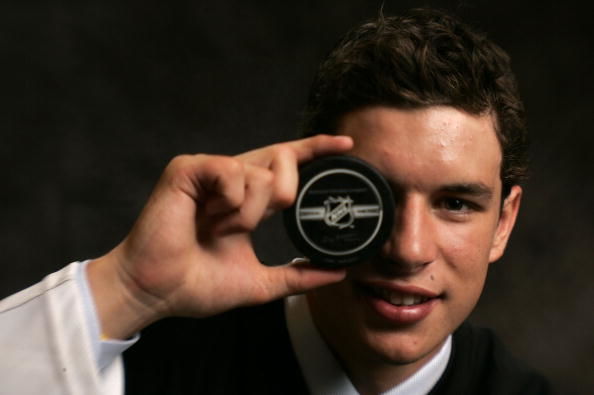 Sidney Crosby is on the cusp of some serious greatness so today at Pensblog we started talking about his greatest goals and set-ups on the ice. Which of course got me thinking about all the many times Sidney Crosby was just so Sidney Crosby. You know what I mean from the crocs and his “what do you mean these aren’t cool?” attitude on them to the many stories of his superstitions. So I’ve compiled a short list of some of the moments that make Sidney Crosby the man Pittsburgh Penguins fans love.

The Time He Lost a Fight With a Mozz. Stick
Sidney Crosby, owner of the greatest backhand shot ever in the National Hockey League got into a serious fight with a mozzarella stick. And the mozz. stick won. Who can forget the time when, while recovering from a broken jaw, Crosby decided to try his hand at a mozzarella stick at a meal? The thing nearly asphyxiated him. Thank god it didn’t cause any damage. It would have been Pancakes Penner all over again.

The Time He Made Pascal a Scrapbook
There could easily be three entries here for the Dupuis family but this one is the most Crosby of them so we’ll go with it. After Dupuis finished his career, his best friend Sidney wanted to give him a little something. So NHL superstar and one of the highest paid athletes in his sport, Sid, got crafty. That’s right, Sid made Duper a scrapbook to commemorate all of their best times together.

The Time He Played Goalie
Many times when he was a kid Crosby would play goalie in his local street hockey games. He even played goalie in a dek game he had while celebrating the 2009 Stanley Cup win. But in December of 2012 during those dark times known as the lockout, he decided to get some reps in at a local dek hockey rink. Yes, because Sidney Crosby is so into hockey that he needed to find just one more way to play during the time when he couldn’t.

The Time He Printed Photos of the Cup Winning Captains
In 2015 Pittsburgh got a glimpse into Crosby’s off-season life in Nova Scotia including his home. This meant Crosby giving the cameras some kind of tour including his home gym. And of course in that home gym are photos of all the cup winning captains from 2009 on. Because he’s Sidney Crosby, that’s why.

The Time He Had a Flip Phone
Until recently, when presumably the thing fell apart and refused to work anymore, Sidney Crosby owned a flip phone. Because what does the NHL’s most talented player need a fancy phone for? This was especially interesting because rumor has it the players on his team would get agitated they couldn’t add him to certain types of group chats.

The Time He Was Player-Coach
When the NHL started putting iPad’s on their team benches it was mostly for coaches. Now, they have giant screens under the coaches feet for potential review purposes but the iPads are still a staple. You know no one missed the shot when, in the middle of a game, Crosby pulled out the iPad on the bench and started making notes about his play. He’s known for directing his linemates and being everything from “vocal” to “pushy” he is the classic example of player-coach.

The Time He Slept With Lord Stanley
In 2009, when Crosby won his first cup he was the youngest captain to win it. That night there was partying, fun having and lots of rebel-rousing. But it ended with one of Sidney Crosby’s most memorable moments – sleeping with the Cup. I’m not sure how this became public knowledge but there is photo proof so… The Time He Hid The Conn Smythe
In 2016 when the Penguins won the Stanley Cup Crosby won the Conn Smythe. This meant he was the playoffs MVP. It was one of the few accolades Crosby had not received previously. But, in true hockey player fashion, he only had eyes for one trophy that night. The story goes that Crosby actually put the Conn Smythe down in some back room at the SAP Center because he wanted to only celebrate with the cup.

The Time He Lived With Mario
Everyone knows about this one. Sidney Crosby lived with Mario Lemieux and his family when he was a fresh-faced youngster first entering the league. But that’s not unheard of. No, the so-very-Sidney part was that he stayed. Crosby continued living with the Lemieux family for quite a while. I mean can you blame him? I’m sure it’s nice to have someone like that just on the other side of the house no matter how big it is.

The Time He Went House Hunting
Sidney Crosby is known for being a nice guy. He took Conor Sheary under his wing, made time for a local college kid who was added to team Canada’s Olympic Men’s summer camp in 2013, and a host of other things. But Matt Cullen just didn’t believe them until he experienced them. Almost immediately after becoming a Penguin, Cullen received a welcoming call from Crosby and as the legend goes, within the week the Pens captain was helping Cullen house hunt in the Pittsburgh area ahead of the season.

The Time He Was Captain Tiny Pockets
When the Penguins don’t win the shiny silver cup Sidney Crosby likes to try to have some fun. He doesn’t do clubs and partying so much as horse racing, though. Which is how, at the 2012 Kentucky Derby, Crosby was approached for a photo. He obliged and went to put his hands in his pockets, as one is wont to do sometimes. Only the pockets were too small for his hands and he was left with a look that the internet had plenty of fun with.

The Time He (almost) Won a Game 8-7
I know he didn’t get the goal, but he did get a helper and he was totally on the ice. The Penguins and Capitals had just slugged it out in a truly spectacular track meet and were deadlocked at 7 in overtime. Crosby helped Conor Sheary to the goal and, of course, it made him the NHL’s 87th scorer of all time.

The Time He Scored the Golden Goal
When it comes to Sidney Crosby it feels like if you looked him up in the dictionary there would be a photo of him, a hockey puck and the Canadian flag because he’s just so Canadian. So of course, he scored the Golden Goal, because who else would it be? He’s Sidney Crosby – that’s how he does things. Canada needed a hero and that game was when the Kid truly started to become the Man.

In short, Sidney Crosby is a gift. He’s a treasure to be cherished by the city of Pittsburgh that we somehow continually are surprised by. He’s one of the greatest to ever play the game and a good role model for kids. What more could we ask for? Nothing. Nothing more than everything Sidney Crosby already is because he’s perfect.