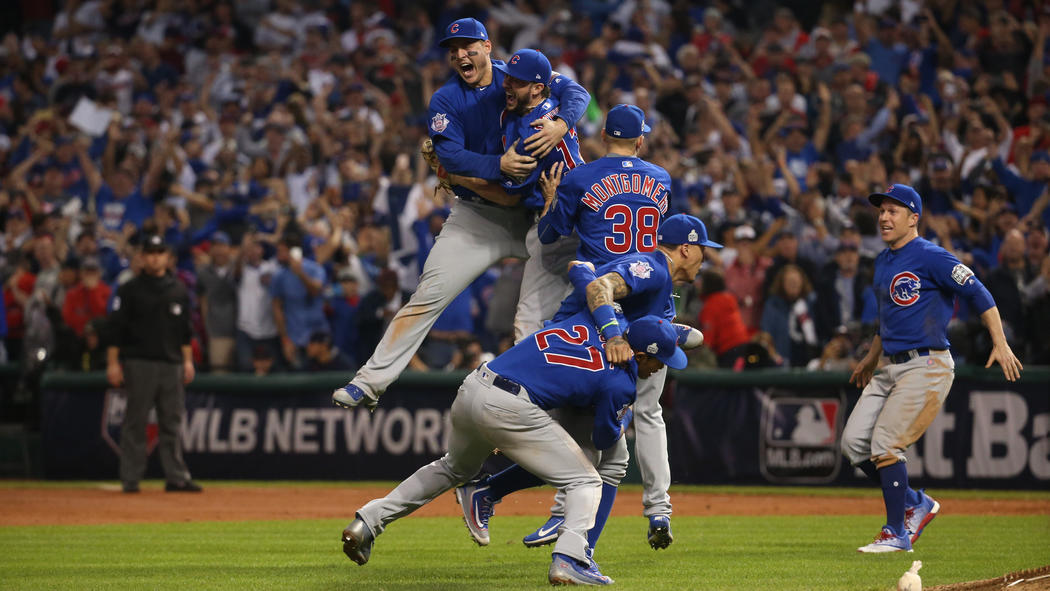 Picture April where you live – flowers in bloom, sunshine creeping well past working hours. Shorts? On the weekends, maybe?

It’s not that in Chicago.

Winter isn’t necessarily still winning, but she’s putting up a hell of a fight. April 5th, though… everything broke right for opening night between the Cubs and Cardinals at Wrigley Field.

Damn, it was a great day.

That weekend, three of my friends (yes, they do exist) were in town to go to the game.

I don’t know where the idea came from, but we had it: Hawaiian shirts to the game. Day drinking, probably.

But there we were, right behind the Cardinals dugout, welcoming Jason Heyward to Cardinals Nation, seeing Wainwright outdeul Lester, collecting a 3-0 win.

The Cardinals life was gooooood.

Full disclosure: When the sun went down, our Hawaiian’s got covered up, but you can still kind of see them? Maybe? Trust me, we had them on.

I wasn’t missing this game. Cards & Cubs in Wrigley Field for the PLAYOFFS? It worked on opening night, so why not the postseason? My Hawaiian got the call for Game 3 of the NLDS.

But the thing I remember most about that game wasn’t the home runs or the L ride. It was the hard-line denial from Cardinals friends, including the ones I was with on opening night, about what the win meant for the Cubs.

To them it was a one-off. To me it was B-I-G trouble. Something felt different.

386 days after that train ride, the Cubs ended the most historic drought in the history of sports and are currently World Champions.

Not an insignificant part of the fun of being a Cardinals fan was (ugh) the Cubs losing streak. The numbers 1, 9, 0 & 8 were cannon. Four digits that could start and end every conversation you ever had with a Cubs supporter.

The world is different now.

Son has finally beaten father when father was actually trying. There’s no denying it anymore – the Cubs are a better team than the Cardinals. They are the champs. And they’re poised for a lengthy run atop the NL Central.

Opening day 2017 will take place in Busch Stadium against the Cubs.

The national media will be out en force to push the narrative that this Cubs squad is a dynasty in the making. The first true national baseball team since the late 90’s Yankees. [Update: Looks like we’re already there…]

They’ll be a sideshow. Yesterday’s news.

Are they, though? Will they be?

The anwsers won’t come quickly or easily. Hopefully Mo and his staff are taking in all the relvery as they plot their master plan to put the Cardinals in conention for #12in17.

Beacuse, if not – if they aren’t treating this Cubs World Series win as the start of something potentially speical for that franchise, then this will be the new normal:

And – candidly – I’m not ready for that.