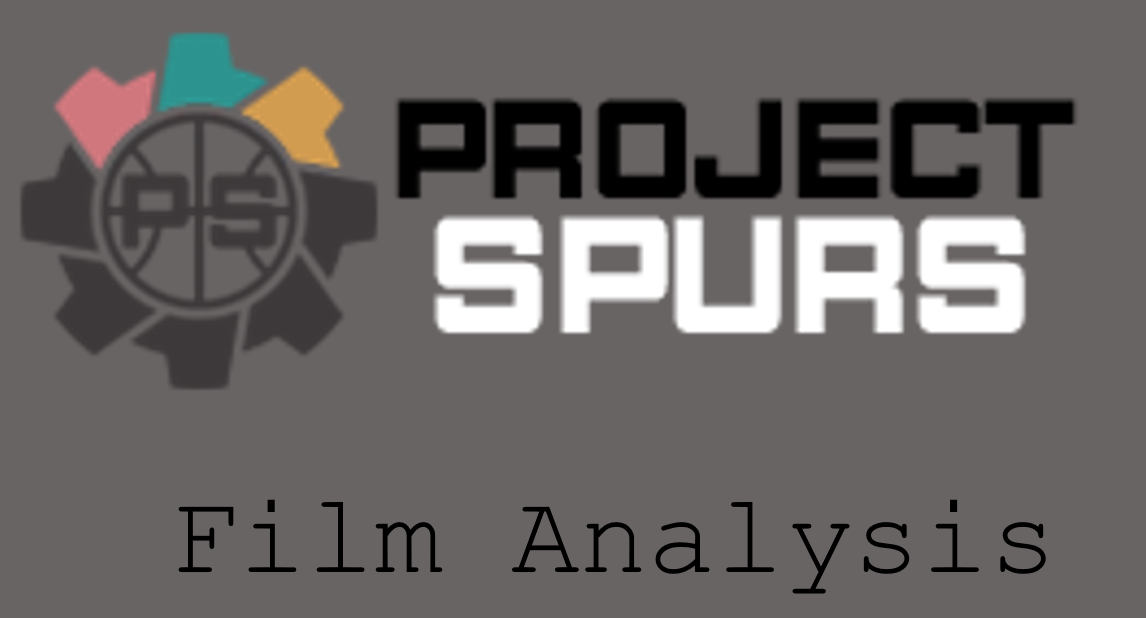 Leading 41-26 after the first quarter Friday against the Brooklyn Nets, the San Antonio Spurs opened the second quarter with a possession in the halfcourt that got the AT&T Center off their feet and excited, as Spurs guard Patty Mills threw and completed an alley-oop pass to guard Jonathon Simmons for the made dunk.

In this film analysis, not only will that possession from Friday be broken down in sequence, but so will a prior alley-oop pass in the halfcourt to Simmons by San Antonio.

First, it seems like the alley-oop Friday was designed a bit, since it was executed at the start of a new quarter. The play diagram below shows the sequences that took place before the ball left Mills’ hands and landed in Simmons’ possession in mid-air.

Friday’s alley-oop connection between Mills and Simmons demonstrated the chemistry the two players have built off the Spurs’ second or ‘Juice’ unit. This season, according to NBA.com/stats, of Simmons’ 30 assisted made baskets, 11 of those assisted makes have come from Mills. That’s a huge gap between first in assisting to Simmons and second, which is David Lee with four connections to the Juice. Nicolas Laprovitolla and LaMarcus Aldridge each have three assists to Simmons.

Speaking of Laprovittola, recently on December 5 in the third quarter against the Milwaukee Bucks, Laprovittola put a Baseline Out of Bounds (BLOB) pass on the money to Simmons in the air during an inbounds possession.

[protected-iframe id=”b0a87e063df87c07478cd964dd1c9194-114320562-25928832″ info=”https://streamable.com/e/4yl5″ style=”position:relative”]
The play diagram below shows how this play was developed, and what was key in its execution wasn’t just the accurate lob by Laprovittola, but the fake use of the screen by Simmons to lose his defender and get to the lane wide open to jump up and catch the ball. Though his points per game (5.9 PPG) are slightly down from last season (6.0 PPG), Simmons has carved a role for himself off the bench as the backup 3 behind Kawhi Leonard, or he can play the 2 as well in different lineups.

In 55 games last season, Simmons played a total of 813 minutes. This season, in just 24 games, he’s already played 452 minutes and he has a usage percentage of 15.7% of the team’s possessions, making him their 8th playmaker night in and night out.

Simmons’ main weakness will continue to be his mid-range and outside jumper, as he’s only shooting 7-of-27 from 3-point range (25.9%), but he is at least taking more threes (1.1 per game) this season.

In the paint, whether attacking off the dribble, in the open court, out of the pick-and-roll, or cutting is when Simmons is most dangerous. He’s connected on 31 of his 58 attempts (53.4% FG) in the restricted area and he’s one of the few Spurs who can score by creating his own shot, as 57.7% of his made baskets (30) have been assisted on, while 42.3% of his other made baskets, he’s had to create for himself (22).

Simmons and the Spurs’ bench unit currently rank 12th in bench scoring (36.5 PPG), and while that might seem like a steep decline because they were ranked 3rd last season (38.5 PPG), it’s still relatively early in the season and some of the numbers of the other teams will eventually start to decrease as the season progresses.

While Simmons’ minutes mainly come with the second unit, there have been games already this season where he’s played in some vital points of close fourth quarters and even some crunch minutes down the stretch due to his defensive ability when the team needs stops.

With Simmons now having a more consistent role this season, he’s developing even more chemistry with Mills and some of the other Spurs, and as the evidence above showed, there might be a few more plays added to the playbook to get Simmons more possessions for alley-oop dunks in the halfcourt.