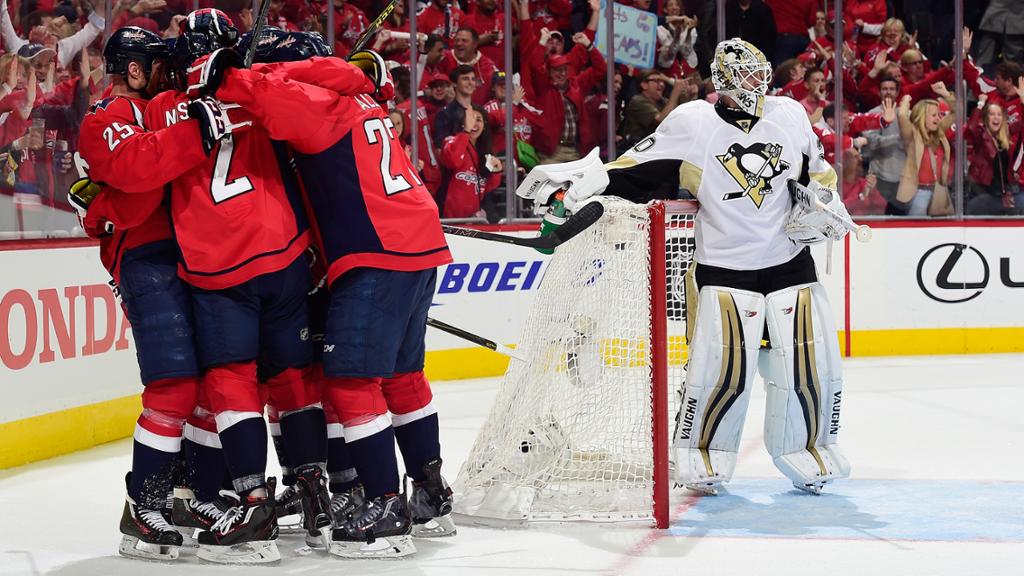 You didn’t think they’d just quit, did you?

However, the main difference was Holtby was marvelous and Murray was pedestrian. That sums up the crux of the game.

You can’t blame this one squarely on Murray but 3 on 19 isn’t the best. The man on the other side only allowed one in 31. Holtby was due to steal one and he did.

The fourth win is the hardest to get, but the fact remains, the Pens return home CONSOL with a chance again to bury the Caps.

Now, you hope the emotion of home-ice, facing elimination all decreases as we shift back to Pittsburgh giving the Pens a hopeful upper hand.

Both teams know good and well what’s at stake in this one. The Caps will again be labeled choke artists if they lose in five games after such a dominant season and the Penguins can buy themselves much needed time off and keep themselves from being burned out for a conference final.

Win this one and you’ve played a grand total of 10 games going into the conference final. That’s rest and recovery that’s worth its weight in gold.

Especially with Tampa Bay well on their way of dispatching the Islanders.

Survive the first 5-10 minutes, let the Caps play on pure adrenaline, and then settle in.

Fehr comes back in for Sunqvist and Letang is back from suspension, putting Pouliot back in the press box.

Maybe a smart move yanking out Weber and putting Schmidt back in.

The Pens did a good job, for the most part, keeping this game boring early. They limited the Caps to shots from low-danger areas that they (mostly) missed the net on.

However, about four minutes in, Rust would hook up Ovechkin pretty blatantly and unnecessarily, leading to a penalty.

This is one of the last things you need in a game like this. It woke the crowd up and gave them a golden opportunity they didn’t take long converting on.

Last thing you needed in this game, last guy you wanted scoring.

A single first-period goal can’t quite end a game, but it can make the task ahead daunting.

However, you run the risk when momentum comes in your favor of getting a little too fired up.

Nick Backstrom would crush Kris Letang with the puck nowhere near, leading to an interference call.

On the power play, the Penguins would return the favor.

Good puck movement as we’ve come to see and not the worst time to get their first power-play goal of the series.

The fake shot by Letang that starts the sequence is the key to all of this: It freezes Richards up high, giving Kessel a chance to get free in the middle, which is helped by Letang working the puck to Sid, who immediately puts it in Kessel’s wheelhouse for a one-timer. Holtby makes the initial save, loses the rebound in the chaos in front of him, and Kunitz puts it home.

Surprisingly, the goal from Kunitz did exactly what it needed to do. It quieted the crowd and put the Caps back on their heels for the remainder of the period. Penguins would add six shots at Holtby and the Caps just 3 at Murray.

That’s where we’d end the first 20. Aside from an early hiccup, a good road period.

New period, similar start. The Caps had some jump and the Penguins took a penalty.
Ian Cole would get in a jostling match with Tom Wilson and he’d get called for a slash.

Again, it was Ovechkin but he had some help.

An Ovi blast leads to a huge stop by Murray but a juicy rebound right on the doorstep for Oshie. With Letang out challenging Ovechkin’s shot, neither Cullen or Daley is able to tie-up Oshie in time for him to miss the rebound and he pots it past Murray.

Buckle up here, folks something crazy is about to happen.

Matty Murray goes full Marty Brodeur on Kuznetzov on a 2-on-1. After a scrum in front of Washington’s bench gives the Caps a 2-on-1, Murray shows 5-hole the whole way, then shuts it down.

Unfortunately, the five-hole giveth and then taketh away.

Rough look all around.

While the Penguins still outshot the Capitals in the second, the Caps had the puck most of the period.

You know they’re huge saves when Doc can barely contain himself.

Down two, on the road, with a desperate team on the other end? Add in a hot goalie and you just kinda knew where this was heading.

There’s not a whole lot to break down for the third.

The Pens had an early power play but only had about one good look.

However, this was the game we learned who Mike Sullivan is.

The Penguins of old? They would’ve spent the next 10 minutes more worried about yelling at refs and being frustrated by a call.

Anyway, Murray was pulled with 3 minutes to go and the Pens couldn’t even get a shot.

Regroup, get back to Pittsburgh where you’ve been largely unbeatable down the stretch, and close this out.