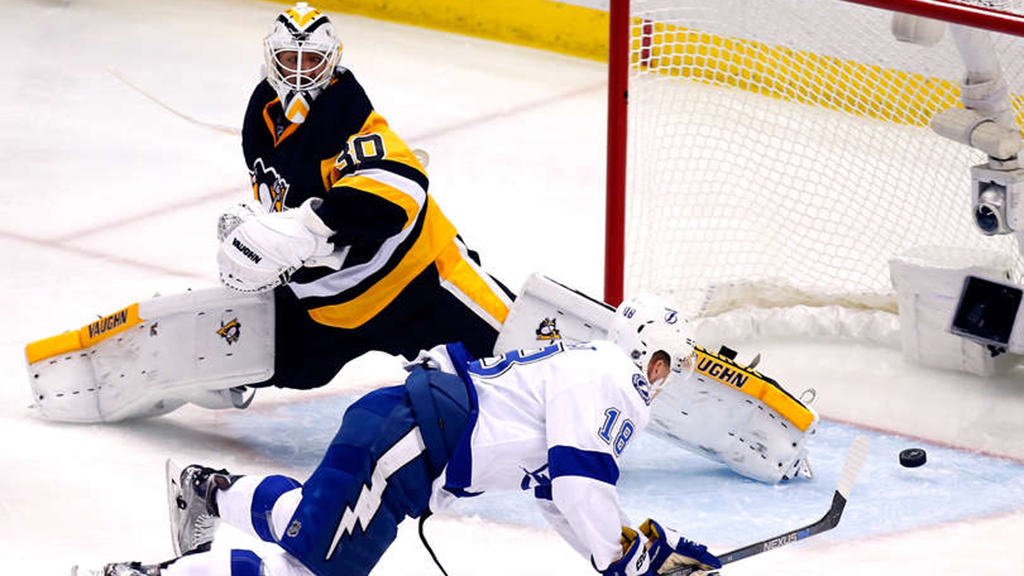 If the Penguins were opportunistic against the Caps, they met their equal in Tampa Bay in this series.

The play was largely carried by the Pens but the Lightning needed just a handful of chances to cruise to a 3-1 win.

About 13 minutes in, it felt like Lady Luck was shining on the Penguins for this run. Tampa goaltender Ben Bishop likely blew out his knee trying to get back into the net. In came Andrei Vasilevskiy and he made 25 saves in a victory for Tampa.

Matt Murray really only gave one up that he would want back, and even then it was a bad luck breakaway that he tracked well but caromed off his leg and into the net.

There really isn’t much the Penguins need to change in game two, just limit Tampa’s chances and keep pounding away.

No real reason to change too much, you made it halfway to the goal.

Both teams came out with their hair lit on fire and shot out of a cannon. I guess the prospect of getting to the Cup Final will do that.

A great pass met by a better save.

As stated above, with about seven and a half minutes to go in the first, Bishop went down.

We will not be GIFing this, if you want to see it, look it up. It’s gruesome.

Murray’s early brilliance continued late into the period. With the playoff leading goal-scorer bearing down on him, he challenges, cuts the angle down, and denies him any sort of a good look.

Kid’s playing like a 10-year veteran. What a story.

It looked like we’d be deadlocked at 0 to end the first but a goddamn unrealistic pass from Hedman to Killorn gave Tampa the opening strike.

Same goes for Murray, tracks him the whole way, shows 5-hole, takes it away and it juuuuuuuuust slips through.

No big thing, bad teams don’t make it to the Eastern Conference Finals. Wasn’t going to be easy.

This game could be summed up in its entirety by comparing two moments early in the second period.

Part one: Less than a minute in the Penguins are pressing and about to get a grade-A chance at the net. Rust can’t get past the pokecheck of Vasilevskiy and Tampa holds on to the 1-0 lead.

Part two: Tampa finds themselves on the power play and a slap shot from the point that is largely unscreened bounces off of Murray’s pad right to Palat and he’s got a wide-open net.

From there, Tampa had some life and some legs.

It was another late strike that would widen the lead.

The speed of Palat and Drouin leaves Dumoulin and Murray with no hope.

The Pens would get one back late on the power play. With Tampa’s best defenseman in the box, it was time to strike.

After a beautiful display of passing, Phil shanks the shot wide but the Pens keep possession. Hornqvist puts a pretty routine shot at the net and it fools Vasilevskiy mainly thanks to Coburn screening him.

The Penguins essentially pressed the whole period but didn’t get a ton of good looks and when they did, Vasilevskiy was right there.

Best chance for the Pens came on a late power play from a spot Phil Kessel rarely misses.

A little slow on the release but man…if that doesn’t sum this one up.

Tampa survived the third, held on and won the game.