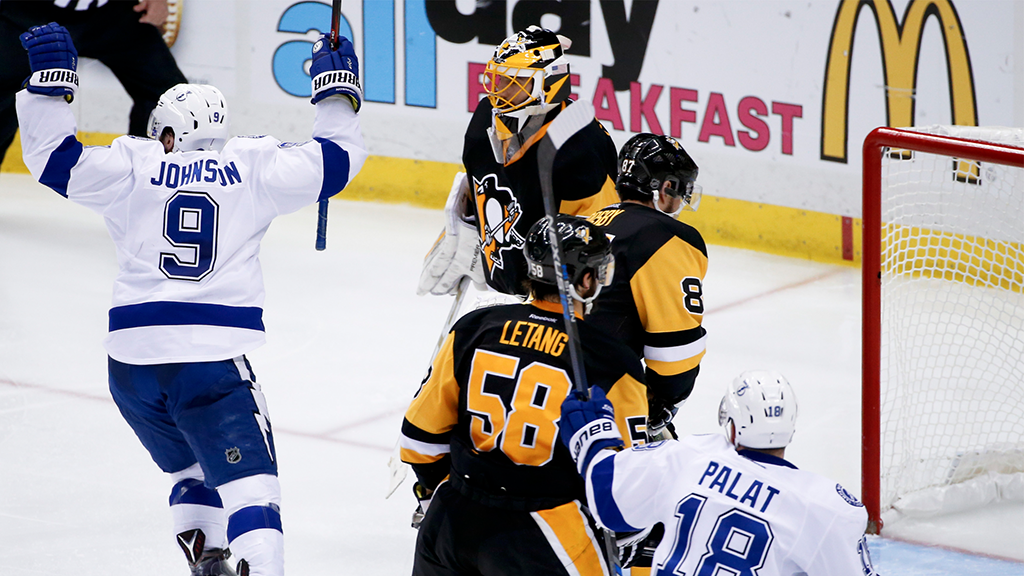 Almost assuredly every column, podcast, drive-time radio show, blog post, and beyond tomorrow is going to have the same exact discussion: “Do the Penguins have a goalie controversy?!?!”

They have two starting goalies. That’s it. That’s the answer.

Wasn’t a fan of going back to MAF after Murray staking his claim to the starting job but it’s not like he isn’t a capable goaltender.

If Garrison’s shot doesn’t hit Johnson, Flower gloves that and we’re not even talking about this.

Two straight against Tampa is not impossible but it’s an assuredly daunting task.

What’s a Stanley Cup run without a little adversity, eh?

Welcome to the swing game. A best of three for the chance to face one of St. Louis or San Jose in the Stanley Cup Final. When this one ends, one team is a game away from validating their instincts that this year is their year. Another team is faced with the reality that all the hard work, two well-earned series victories, all of it, is teetering on the brink of being left in the scrap heap of history.

The conference finals are a lot like the episode before your favorite show’s season finale. The set up to the finale is often far better than the finale itself.

No one said it would be easy.

Well, Daley’s out. So welcome back to the lineup, Olli Maatta.

Clearly HCMS is not happy with Conor Sheary so for the first time this postseason, hello Beau Bennett.

Of course, the obvious. After Tampa built a 4-0 lead in game four at the end of 40 minutes, HCMS brought Fleury in for cleanup. He only faced seven shots but stopped them all.

It’s a curious decision but so far, everything Sullivan touches turns to gold so I won’t question it.

Jon Cooper strikes me as a more competent Dan Bylsma with a similar fatal flaw: he needs to prove how smart he is. Your team did fairly well in game four. Why is Koekkoek moving back to defense and you’re running 11-and-7?

It ain’t broke, don’t try to fix it, stop picking at it, etc…

Could be brilliant, could be stupid. We’ll see.

Game five, coming at ya.

The speed of the first period was undeniable but it was also evident neither team was willing to blink in this staring contest.

For as fast as both teams were moving, both were equally as defensively accountable. A few shots each way but nothing that could be categorized as a truly dangerous scoring opportunity.

The best of them was when Matt Carle had a great look but the combination of Fleury and Schultz negated the shot.

Not to take away from Fleury or Schultz there but Carle’s little half-deke allowed both 4 and 29 to get over in position. He fires that right away and chances are the Pens are staring down a very early 1-0 deficit again.

The Penguins had a 4-on-3 power play that turned into a normal power play that served several good looks but Vasilevskiy was there to stuff a Malkin one-timer and a Crosby deflection. If you can’t score, chances to build off are what you want.

Throughout the remainder of the first, the staring contest continued.

Until there was less than one, singular second left.

After 19:59.03 minutes of defensively accountable hockey, coming out with a 1-0 lead is a pretty good place to be.

The Penguins picked up the second right where they left off – going right to the net.

Sidney Crosby Appreciation Blog: Good lord does that man have next-level lower body strength. With Sustr draped all over him, he still manages to fight him off, get square, survey the ice and work the puck to Maatta for a shot on net. This won’t end up in his eventual Hall of Fame highlight reel package but man…you almost take it for granted at this point.

Remember earlier in the series when Pierre said Tampa wanted to matchup Boyle with Sid because of the size mismatch? Sustr is 6’6”, Crosby is….not.

If you have sensed a trend in this series, you aren’t alone.

Following the 2-0 lead the Penguins kept their foot on the gas and took the game to the Lightning.

They even had a power play mixed into their time carrying play but didn’t convert.

Bet you can guess who scored next.

Here’s where they can do better:

Sustr reversing the puck here makes the goal happen. Four of the five Penguins on the ice are all fixated on him and the puck, including Kunitz who’s stuck out on a long shift. That wing is his side. He needs to be closer to the middle of the ice than the wall. This gives Killorn a chance to pounce on the puck, take a look, and fire a perfect shot.

Just over a minute later, we were back to square one.

Just when you thought the Lightning had completely shifted this game, the Penguins took that blow and got right back to work.

Again, it was a late goal that helped the Guinos.

Chris Kunitz, ever the steady soldier, buries a shot from Malkin that Vasilevskiy kicks out. He tries to glove it but misses and Kunitz makes no mistake.

Alright. Win the third and you’re going back to Tampa with a chance to knock the defending Eastern Conference champions out.

The Penguins started the period strong but didn’t get many good looks.

During a delayed penalty on the Penguins, one of the strangest sequences you’ll see occurred.

Maatta sat for four minutes after drawing some blood on a high-stick.

The first two minutes were killed and then Tyler Johnson took a swat at Letang in frustration.

Once back to 5-on-5 play, with the crowd hyped up due to the presence of both HBK the line and HBK the wrestler, Phil Kessel put on his best Sidney Crosby act and nearly put this one away.

He scores there? With the crowd already loud? Game over.

The trend of the series continued in the third.

With under 10 to go and their backs against the wall, the Lightning started pushing back. Full marks to MAF who battled his absolute ass off throughout.

The Penguins were the better team. They possessed the puck more. They had quality chances. They just couldn’t get that one extra goal they needed.

This was no more evident than right before the Lightning would tie it – Chris Kunitz had two grade-A chances and again, Vasilevskiy just refused to be beaten.

As good teams often do, they turn a moment like this into their own advantage.

With HBK in the building the Penguins were 3:16 away from being one win from the Cup Final. Tampa had some Sweet Chin Music ready for those plans. No stunners tonight.

The next goal didn’t take long at all.

Less than a minute in, Tampa called game.

Good passing by Tampa, a great shot by Garrison that hits Johnson in front, fooling Fleury, and a curious choice by Dumoulin to dive.

Do or die in game six. Let’s ride.