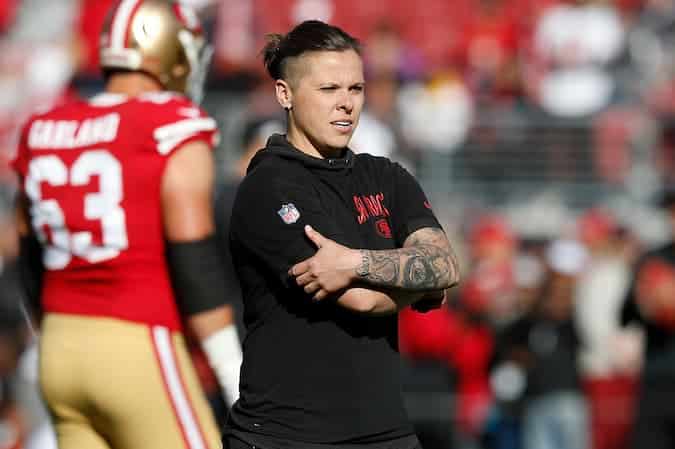 Katie Sowers made NFL history by becoming the first female and openly gay coach to coach in the Super Bowl, when she was part of the San Francisco 49ers staff in the 2019 season.

The 49ers may not have won the Super Bowl, losing 31-20 to the Kansas City Chiefs, however Sowers’ impact on the NFL has been huge.

Katie Sowers has already won tonight as the first woman and the first openly LGBTQ+ person to coach in the Super Bowl. When there is more diversity in sport, everyone wins. pic.twitter.com/0s7D1gxNR2

Just a year later, Lori Locust and Maral Javadifar of the Tampa Bay Buccaneers helped the Bucs to win the Super Bowl, becoming the first female NFL coaches to clinch a Super Bowl win. Also, in the same match, Sarah Thomas was the first woman to officiate a Super Bowl.

Sowers spoke on Her Huddle (an NFL show), and she said “It was one of those moments where I remember looking around during the national anthem and thinking it was about when I was younger, dreaming of being on a real football team,” Sowers recalled. “And here I was, at a Super Bowl.

“Low and behold, I’d then become the first woman to lose a Super Bowl. But, even with that out of the way, it was this the idea of, one day it won’t be a headline, it won’t be weird to see a woman in the Super Bowl.

“That’s when I think we really know that we’ve been successful, when that headline is no longer a big deal, because it’s just the norm.”

The landscape in the NFL is slowly but surely changing. Last season, there were six women on coaching staffs in the NFL, compared to that figure being zero less than a decade ago.