Fresh Ice: How Pitt Can Use Penn State as a Model for DI Hockey 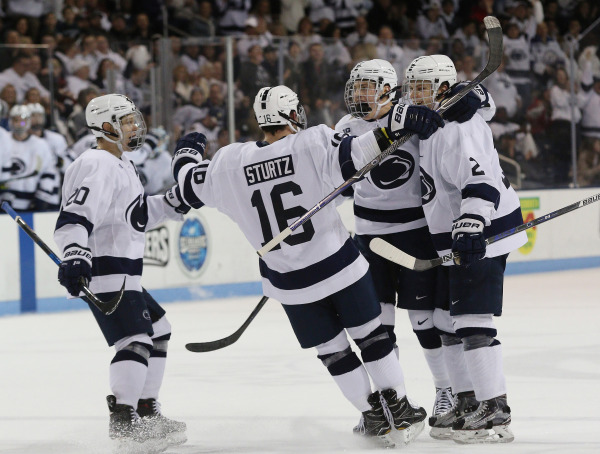 Hockey, Pittsburgh. The two words have become synonymous over the last five years. From Pittsburgh products like Brandon Saad winning the Stanley Cup to the Penguins and their successful back-to-back cup runs in 2016 and 2017; hockey has never been bigger in the Steel City. And it’s time for Pitt to get in on that.

Lately, people have been talking about the possibility of Pitt creating a Division I men’s (and likely women’s) program in ice hockey and how successful the program could be. So, I thought I’d use some of what I’ve seen in tracking Penn State’s five-year-old program (as a student who worked with the program in 2012 and 2013) and look at how it might work if Pitt wanted to do the same thing. And the good news, Pitt fans, is it takes a few key ingredients but I think Pitt could do it and do it well.

So, how do you start a hockey team? Well, it starts with commitment. At Penn State, they had Joe Battista who fought for the program and they had Terry Pegula who believed in the program and endowed it. Pitt would likely be looking, as Penn State was, to add Division I hockey for both Men and Women. And the thing is that Pitt? They have an ace in the hole that could make all the difference- The Pittsburgh Penguins. The Penguins have money, power, and facilities that could all help get Pitt off the ground.

Pitt could work out an arrangement with the Penguins to use the UPMC Lemieux Sports complex in Cranberry as it’s home rink, at least in the short term. The state-of-the-art facility would give them space and oh, hey, their medical center’s name is right there in the name! This is important though because if they start at PPG Paints it could paint a bad picture detrimental to a fledgling program. No one wants to play in front of an empty building. However, PPG Paints Arena could be the host of a few higher profile match-ups. Say, Pitt-Penn State? Once or twice a year. Longer term, they would likely want to upgrade the Petersen Events Center to house an ice rink. Again I say, they’re going to need someone willing to commit to making that happen.

The next few steps are completed after a program has been announced but they each could easily be taken on by Pitt and are, frankly, likely a lot easier than the first one.

First of all, you need a coach. And not just any coach. Penn State’s Guy Gudowsky is synonymous with his program. “Guys our guy!” was proclaimed when he was hired. They plucked him from Princeton where he won the ECAC title in 2008 and made back-to-back NCAA Championship appearances in 2008 and 2009. He had a pedigree of sorts, of being successful. Pitt needs that. Anyone can sit behind a bench. Only some people can truly coach. And, coaching college kids is especially difficult taking into account egos, the fact some will go on to play pro but many of them won’t. For many kids, NCAA is it. Balancing development for those who will go on with winning for those who won’t, it’s no mean feat. And Pitt will need a coach who is willing and able to do just that.

Oh, and they need to recruit. This will, of course, fall heavily on the shoulders of the head coach but they will also need a face. A player willing to be “the first.” Penn State had Tommy Olczyk, fearless and battle-ready. The program’s first captain in title and without it. He stood up and yelled from the mountains how much he loved being a Nittany Lion. Pitt will need that, too. But, again, Pittsburgh has become such a hotbed with its Penguins Elite program, there has to be someone out there. There is certainly someone willing to go to bat for a school with name recognition. Someone who grew up in this town, or who is just willing to be part of something special, it’s not incredibly important where they come from, just that they come. This can and will be aided by what conference they join as well. They will want to either join the Big Ten or Hockey East. Both are currently unbalanced with odd-numbers of teams and both offer players the opportunity to be seen by professional scouts and make a name for themselves among previously drafted players.

Next, come the students. Penn State’s rise and success were aided and abetted by the voracious support of its students and alumni. I was in the meeting where they first mentioned organizing the “student section”. What it’s grown into, The Roarzone is one of the most well-known student sections in the sport. Pitt has the Oakland Zoo but they will need something similar when getting their hockey program going. A group willing to bring the noise to a team that may, at first, be only okay in a conference filled with giants. And students willing, at least at first, to come out to a game that is not on campus.

Now, of course, the final hurdle is the market. Pittsburgh has the Penguins and a Division I program in RMU. Pitt will be going up against these programs. Thing is, Pitt can easily outpace RMU if it does its homework. If they recruit well, work hard, do the kind of marketing they need to (Script jerseys, come on now), and build upon natural rivalries (hello, Penn State-Pitt games) they could bump out Robert Morris within their first five years as a sanctioned program. Because really, we all know the second Pitt gets DI hockey, anyone who is from Pittsburgh and looking for a college team to follow will pick them.

And look, this isn’t to say this will all be easy. That it could all be done tomorrow. It simply points out how Pitt has the resources to do things the way Penn State did which is the model for starting a DI hockey program successfully. Pitt has all the capabilities and all the puzzle pieces. Now they just have to put them all together.