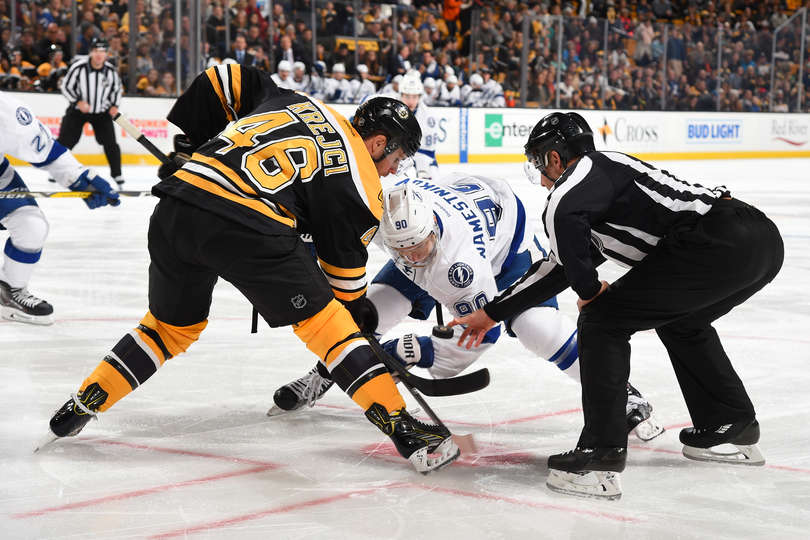 A three-goal second period helped the Boston Bruins end a three-game losing streak with a 4-1 win against the Tampa Bay Lightning at TD Garden on Sunday.

The first period was a chippy scoreless one, which included Nikita Kucherov‘s first NHL fight. He had just eight penalty minutes coming into the game. His last fight was in Russia on 2/22/11.

The Lightning were 0-2 on the power play.

Ex Bolt Dominic Moore opened the scoring at 2:24 of the second prriod, assisted by Colin Miller and Ryan Spooner.

Boston’s David Backes scored on the power play at 12:30 of the second period assisted by Patrice Bergeron and Torey Krug.

The Bruins’ Jimmy Hayes beat Ben Bishop on a one-timer from the slot at 17:33 from David Krejci and Tim Schaller to make it 3-0.

Shota after the second period were 21-16 Bruins.

Boston made it 4-0 on David Pastrnak‘s 13th of the tear at 9:43 of the third period from Krug and Brad Marchand.

At 17:21 Victor Hedman fired one  by Tuukka Rask to break the Bruins shutout streak. The goal was assisted by Brayden Point and Nikita Nesterov.

Jonathan Drouin had nine shots on goal. the most by an individual this season for the Lightning.

Tuukka Rask was sharp, stopping 30 of 31 shots for Boston.

Ondrej Palat was hurt late in the game.  Coach Jon Cooper offered no real update on the injury. He didn’t want to speculate on the severity.