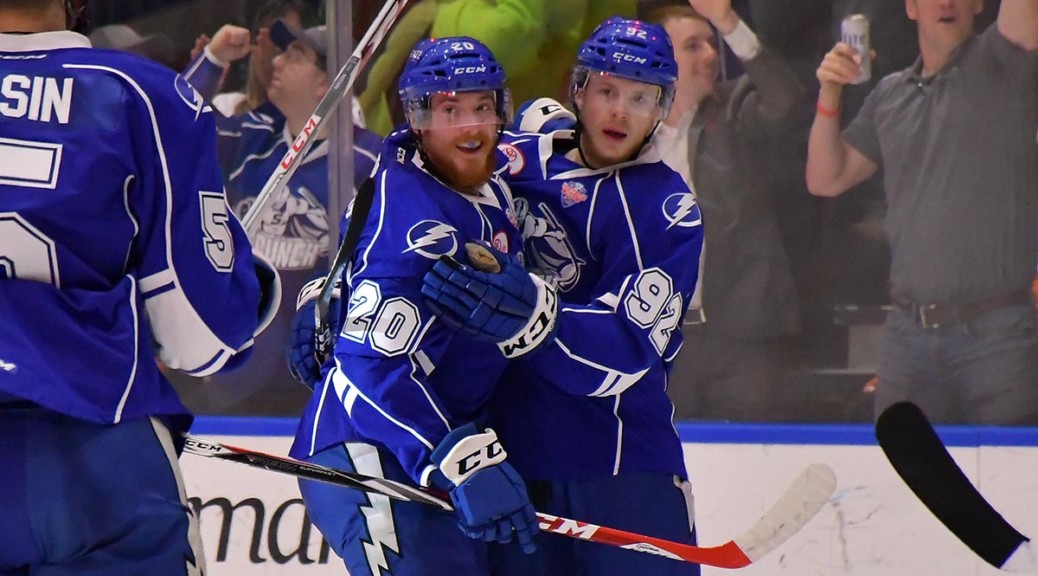 It was home, sweet home for the Syracuse Crunch, and now they’re right back in the thick of the Calder Cup Finals.

Joel Vermin scored two goals in less than a minute late in the first period to put Syracuse ahead for good and the Crunch held on for a 5-3 win in Game 3 on Wednesday night at the Onondaga County War Memorial Arena.

Syracuse struck first in front of their raucous home fans as Byron Froese collected a hard carom off the end boards and banked a shot in behind Jared Coreau (13-3) at 7:00 of the opening period. It was Froese’s first goal of the series and fifth of the playoffs.

Grand Rapids tied the game at the 9:17 mark at the end of a long shift in the offensive zone. Martin Frk‘s shot hit the post and settled in the crease, where Tyler Bertuzzi chipped it over the goal line for his eighth goal of the postseason.

The Crunch regained the lead at 15:31 as Vermin’s wrist shot from the blue line eluded Coreau to make it 2-1. The Swiss-born forward struck again 57 seconds later with a power-play goal, tucking a rebound inside the far post behind Coreau to give Syracuse a 3-1 advantage, the first two-goal lead for either team in the series.

Syracuse had a chance to open up a three-goal lead in the second period, but Anthony Cirelli could not convert on a breakaway. The Griffins took the puck back the other way and Dominic Turgeon finished the rush with his first goal of the postseason at 6:58, cutting the deficit to 3-2.

Syracuse needed just nine seconds to capitalize on another power play later in the period, restoring their two-goal cushion on a goal by Tye McGinn at 13:22. It was McGinn’s first goal of the Finals and fifth of the playoffs.

Cory Conacher made it 5-2 at 15:18, finding a loose puck in the crease off a shot by McGinn and knocking in his league-leading 11th goal of the postseason.

Kyle Criscuolo scored at 16:38 with the teams skating four-on-four, finishing off a give-and-go with Bertuzzi to make it 5-3.

The third period was scoreless, with Mike McKenna (12-7) stopping all 12 shots he faced in the frame to preserve the win.

NOTES: Attendance was 5,996… Syracuse improved to 10-0 at home, becoming the third team in AHL history to win at least 10 consecutive home games in a single postseason… Grand Rapids fell to 4-3 on the road… The Griffins were 0-for-4 on the power play, while the Crunch went 2-for-6… There was one lineup change for Game 3; Daniel Walcott made his series debut for the Crunch, replacing Erik Condra… Griffins captain Nathan Paetsch skated in his 100th career Calder Cup Playoff game, becoming the 18th player in league history to reach that milestone… Tonight was the first home win by a Syracuse team in the Calder Cup Finals since April 10, 1938, when the Syracuse Stars defeated the Providence Reds, 4-3 in overtime, at the New York State Fairgrounds Coliseum. – (TheAHL.com)