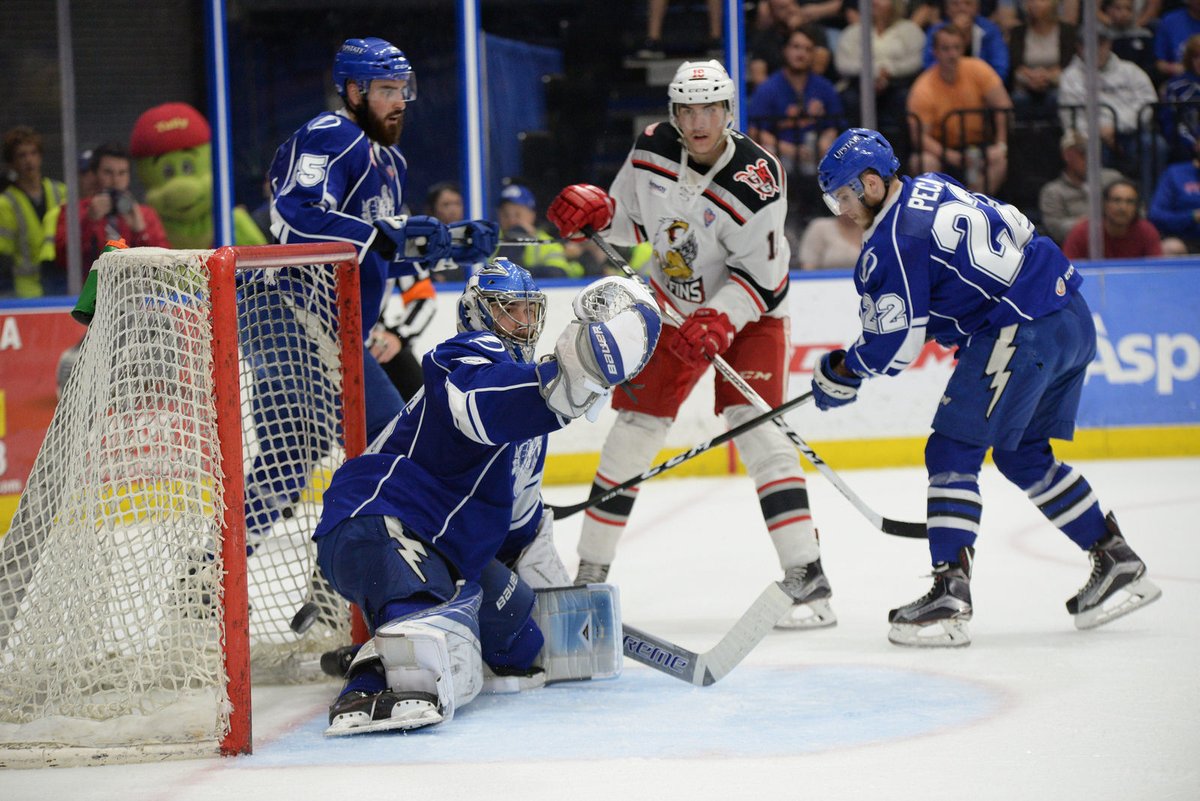 Facing elimination in their final home game of the 2016-17 season, the Syracuse Crunch erupted for five goals in the first period and went on to a 5-1 victory over Grand Rapids in Game 5 of the Calder Cup Finals at the Onondaga County War Memorial Arena on Saturday night.

With the Griffins still up three games to two, the AHL’s championship series returns to Grand Rapids for Game 6 on Tuesday (7 p.m. ET, AHL Live, SiriusXM 91).

An aggressive forecheck gave Syracuse the lead just 17 seconds into the contest as Gabriel Dumont collected the puck behind the Grand Rapids net and found Kevin Lynch alone in front. Lynch roofed the first shot of the game over the shoulder of Jared Coreau for his third goal of the playoffs.

Mathieu Brodeur made it 2-0 for the Crunch at 4:33 with a shot from the top of the left-wing circle that beat Coreau to the glove side. It was Brodeur’s first goal of the postseason.

Byron Froese gave the Crunch a three-goal lead with 5:55 left in the frame, crashing the net and poking in a rebound of Yanni Gourde‘s attempt for his second goal of the Finals and sixth of the playoffs.

Syracuse then got a power-play goal from Cory Conacher with 2:41 to go, his third of the series and league-leading 12th of the postseason making it 4-0. And Ben Thomas took a cross-ice feed from Gourde and one-timed a shot home with 43.8 seconds left, giving the Crunch a 5-0 cushion and sending Coreau (14-4) to the bench in favor of Eddie Pasquale.

The five goals came on 12 shots and marked a Crunch franchise playoff record for a single period.

Ben Street finally got Grand Rapids on the board at 5:58 of the third period with his fourth goal of the series and his eighth of the playoffs.

Mike McKenna (13-8) held down the fort in the Syracuse cage and finished with 36 saves, including 18 in the opening period in support of the Crunch’s offensive barrage.

NOTES: Attendance was 6,479, a standing-room-only crowd for the second consecutive night… Syracuse was 1-for-9 on the power play in Game 5 and killed off all five Grand Rapids chances… The Griffins were 0-for-16 on the power play in the three games in Syracuse… The Crunch finish the postseason with an 11-1 record at home, outscoring the opposition by a 54-27 margin… The Crunch were the first team to score five goals in a single period of a Calder Cup Finals game since Chicago in 2008 (Game 3 at Wilkes-Barre/Scranton)… Cory Conacher set a Crunch franchise record for points in a single postseason (27), surpassing the mark of 26 set by Ondrej Palat in 2013… Eddie Pasquale made 19 saves in relief for the Griffins, his first Calder Cup Playoff appearance since helping St. John’s to the conference finals in 2012… Jared Coreau did not allow five goals in a game all regular season; Syracuse has scored five off him three times in the Finals… The Crunch are bidding to become the first team since the 1949 Providence Reds to win the Calder Cup after trailing 3-1 in the Finals. (TheAHL.com)