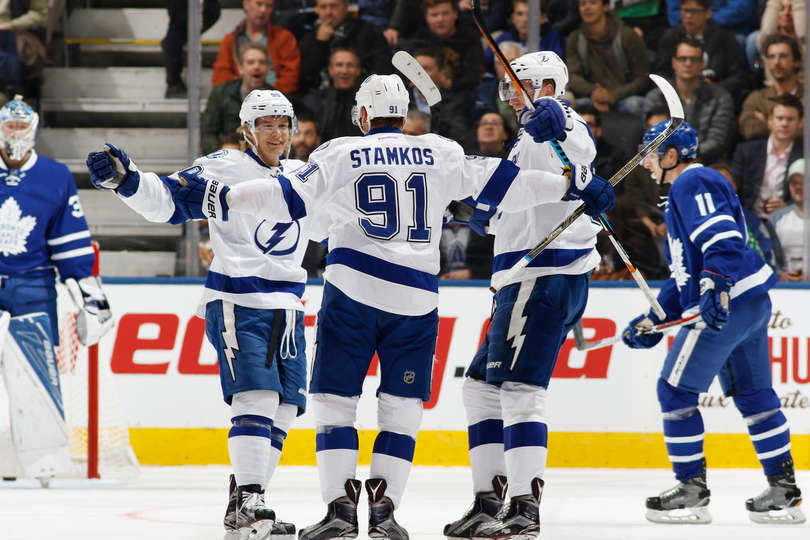 The Tampa Bay Lightning continued their six game road trip against the division rival Toronto Maple Leafs. Coming off of a definitive win on Saturday, the Lightning earned two points in a 7-3 victory that was much more interesting than the score may indicate.

Tampa scored the first goal in a game for the first time this season thanks to Steven Stamkos at 1:19 of the first period after Andrej Sustr jumped up on the play to keep the puck in the zone. They didn’t wait long to strike again. When a Braydon Coburn slapshot trickled through Frederik Andersen, Alex Killorn knocked it home from his position in front of the net. Brayden Point registered an assist on Killorn’s goal as well, continuing to drive the pace of the game and contribute in his rookie season.

Stamkos wasn’t finished in his TO return. After being set up by Sustr again, he fired an absolute rocket of a shot from above the circle to make it 3-0. The Lightning onslaught continued in the second period with Victor Hedman making it 4-0 at 7:23.

That’s when things started to get a bit bizarre. Ben Bishop took a shot off the mask that knocked out his two front teeth. After receiving brief medical attention Bishop donned his spare mask and stayed in the game. Despite this injury, Bishop looked the best he’s looked through the early goings in the season. Tampa was outshot 43-24 and he’s one of the big reasons the Bolts ended up with the victory.

Tampa sat back a little as the game continued and Toronto crept back into the game. It started with William Nylander‘s goal with less than a minute left in the 2nd. Nikita Kucherov widened the lead at 7:35 in the third but to their credit the Leafs kept coming. Goals from James van Riemsdyk and Auston Matthews brought Toronto within two goals of tying the game.

-Steven Stamkos registered 4 points and was named the first star of the game.

Tampa heads to Montreal where they will face the Canadians at the Bell Centre on Thursday. Puck drop is set for 7:30 pm.