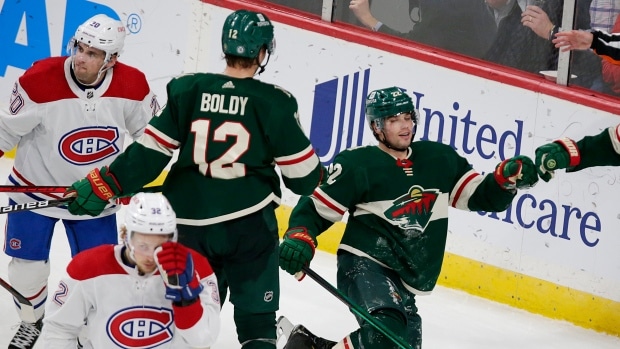 I don’t know about you, but I can’t say I was in a celebratory mood after the Wild clinched a playoff spot. I know it’s fun and exciting to think about the playoffs, but let’s take a look at how we got there. There have been some recent games that just leave you either shaking your head or make you want to apply your head to the nearest hard surface. Don’t get me wrong here, because I don’t expect to win every game. However, there have been games that either they should have won. There have also been games against opponents like Saint Louis, where Minnesota needs to figure out how to beat. Because if they don’t do that, it’s going to be another postseason where they fail to get out of the first round.

Tonight is another night where Minnesota should win. Honestly, it will be unforgivable if they leave Montreal with one or no points. In fact, I will go as far to say it will be unforgivable if they fail to win this one in regulation. Yet, I have a bad feeling about tonight. Montreal is near or at the bottom of the four team stats we include in our previews. While the Canadiens’ have the second worst power play in the league, somehow Minnesota will find a way to fail at the penalty kill. That is simply how this season has gone, and again if they can’t figure out how to shore up their penalty kill and do the basics, it will again be a short postseason.

There’s a major elephant in the room that we need to discuss right away however. It has been reported that Marcus Foligno has entered Covid-19 protocol. Per the injuries list on TSN.com, it appears that as of now, only Foligno and Ottawa’s Colin White are the only players in the league in quarantine. Per the current process, Foligno can be cleared after five days, as long as there are no further positive tests. This means he misses tonight’s game as well as the home games against Vancouver and Seattle. Hopefully he clears after the five days, because there are still games against Nashville, Arizona, Calgary, and Colorado.

With Foligno out of the lineup for the near future, Minnesota has called up Mitchell Chaffee from the Iowa Wild. In the up and down season that is the Iowa Wild, Chaffee has been a standout. Right now, he leads Iowa with 22 goals and is fourth in points with 37 in 45 games. The former UMass star has a pretty potent shot, which he hopefully uses. It should also be noted that of his 22 goals, eight of them came on the power play. With Chaffee’s call up, I can hear the gnashing of teeth and pulling of hair by the Marco Rossi fanboys out there. While I understand why they’re freaking out, I would like to tell them to watch the Iowa games online. He’s not what you think he is.

One thing I’ve really appreciated about this year’s team, is that accountability is a real thing and not just a buzz word. In comparison to other seasons and other rosters, this year’s team actually believes in it. While some of us were reveling in the excitement of making the playoffs, it appears that some players called a meeting with head coach Dean Evason. It appears that Mats Zuccarello, Kirill Kaprizov, and Ryan Hartman met with their coach to apologize for their horrid play. I don’t know about you, but it is beyond refreshing to see that. Never would Ryan Suter or Zach Parise have done that.

Minnesota has played a lot of extra minutes this season, meaning overtime. However, the closer we get to the postseason, these are extra minutes that a team shouldn’t want to be playing. When you play overtime, it simply means more ice time for usually your star players. Instead, this team needs to be playing them a bit less not more. It would be nice for Minnesota to be able to call up some more players from Iowa to give them some ice time in preparation for the playoffs, but instead they can’t afford to do that. Home ice is still possible for Minnesota, so they need to play fewer minutes not more.

So how can the Wild accomplish less extra minutes? Firstly, and this should be obvious, is to jump out to a lead. Too many times, Minnesota allows the opposition to score first, so they end up working harder than they need to in order to play catch up. If the Wild could get up by three or more goals, they then could reduce the ice time and the amount of shifts to their top six forwards. Less time to the top six then gives more ice time for the bottom six forwards, and they can continue to play hard and forecheck, essentially wearing out the opponent. Not only does this spare some wear and tear on the skilled scorers, but it gets those bottom six primed for the physical wars they will experience in the playoffs.

Montreal was in the Stanley Cup finals just a season ago. For some bizarre reason, Carey Price is back in the lineup after missing almost the entire season. At this point in the season, why bring him back. However, Price’s injury wasn’t the only one plaguing this team. In fact, their entire season was like an episode of M*A*S*H*. The team fired general manager Marc Bergevin as well as head coach Danielle Ducharme. They have played better since the hiring of Martin St. Louis as their head coach.

In fact, no player has been more positively effected by the new head coach than Cole Caufield. Since the hiring of St. Louis, Caufield has rediscovered his scoring touch. He has been one of the league’s most dangerous forwards this month. However, Caufield’s return to scoring came too late for the Canadiens. Just like the penalty kill has been an issue for the Wild all season, offense has been an issue for Montreal all season. It will be interesting to see what happens with Montreal next season.

The blueline for the Canadiens has also been a bit of a sore spot this season. Departures of players like Ben Chiarot and Jon Merrill along with the injury to Shea Weber have essentially gutted what was a rather stout Montreal blueline. Jeff Petry has been left to struggle through a miserable season. And then when you combine the defensive woes to the injury to Price, it became beyond obvious just how much this team leaned on Price to be their final defensive piece of the puzzle.

Offensively, the team needed big seasons from players like Nick Suzuki. He tried his best, but wasn’t enough to carry the team. Josh Anderson and Brendan Gallagher both regressed this season, which Montreal could ill-afford. Also no living up to the expectations of the Canadiens’ brass was Mike Hoffman. The scary part is when you look at Montreal’s Top Five scorers, they only have one player with twenty or more goals. Yet for the first time in forever, Minnesota has six players with twenty or more goals. And to think. one of them is Foligno.

It appears we could have a bit of a goaltending conundrum ahead of us. It’s been a pretty standard rotation between Cam Talbot and Marc-Andre Fleury. However, one could argue that Talbot has been getting the starts against the harder teams. In order for Talbot to take on Vancouver (who are not completely out of the playoff picture yet), that means that Fleury would have to start tonight. Then Talbot would get the Vancouver start and Fleury the Seattle start (they’re back to back). It also then would mean that Talbot would get the Nashville start. Of course, with the last two games being against Calgary and Colorado, it probably doesn’t matter in the long run.

I hope tonight serves as a redemption game of sorts for many on the Wild roster. They have an opponent where they could utterly set them on fire by putting on a scoring clinic. However with their new outlook on life with a new head coach, you have to worry that Montreal will play like they have nothing to lose and everything to gain by playing spoiler. I only wish I knew which versions of both teams we’ll see tonight. 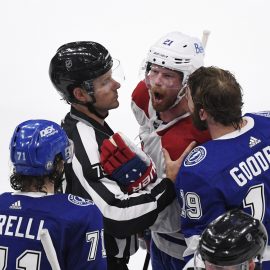