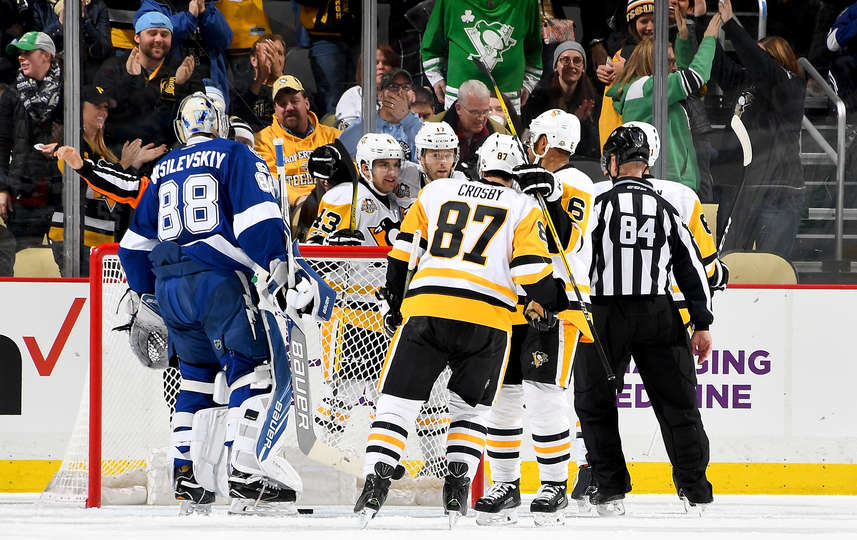 The Tampa Bay Lightning (19-19-4) have lost four in a row to start January after winning two of their final three December games. The latest humiliation was administered by the red hot Pittsburgh Penguins last evening 6-2. Tampa Bay goalie Andrei Vasilevskiy made 34 saves in his third start in four days. He and the team has allowed 22 goals in his past four games.

Lightning goalie Andrei Vasilevskiy, making his ninth straight start, was busy and sharp in the scoreless first period as the Penguins put 15 shots on him. The young Russian netminder made a number of big saves, especially late in the period when Pittsburgh dominated play.

The Penguins Marc-Andre Fleury stopped all ten shots the Lightning fired at him in the first period.

The second period saw Jonathan Drouin pounce on a rebound of a Victor Hedman shot in the right circle and beat Fleury for his 12th of the season at 2:19.  The goal was assisted by Hedman (30) and Valtteri Filppula (19).

Conor Sheary quickly tied the game, beating Vasilevskiy from the crease after Bryan Rust‘s shot made it through  the Lightning goalies’ pads at 6:44 for his tenth goal, assisted by Rust (7) and Sidney Crosby (17).

Soon after Sheary’s goal Vasilevskiy made an other-worldly save on a streaking Eric Fehr.

Fehr scored on a 2-on-1 after the Lightning power play expired. It was Fehr’s fifth of the year, assisted by Matt Cullen (8) at 11:14.

The second period ends with Pittsburgh up 2-1 and Cedric Paquette heading to the dressing room after a questionable hit by Steve Oleksy.

Ther Penguins were holding a 29-21 shot advantage at this point.

At 2:33 of the third period Chris Kunitz scored his fourth goal, after a failed clearing attempt by Victor Hedman. The goal was assisted by Olli Maatta (4) and Nick Bonino (12).

Just over a minute later Scott Wilson beats Anton Stralman to the puck in the Bolts zone and backhands a shot over Vasilevskiy’s shoulder.

Vladislav Namestnikov made it 4-2 on the power play. Namestnikov’s fifth was assisted by Jonathan Drouin (14) and Anton Stralman (11) at 5:40.

The Penguins Phil Kessel gave the Penguins a three goal lead as he pounces on a loose puck in the crease for his 13th of the season at 7:50. The goal was assisted by Sidney Crosby (18) and Conor Sheary (14).

It looked like the Bolts players were saying to themselves, “here we go again” .

With Hedman in the box for tripping, Kris Letang scored his third goal, assisted by Justin Schultz (10) and Matt Cullen (9) at 17:20.

Let’s see what changes (if any) are made by GM Steve Yzerman in the three days before the next game. This team needs a top four defenseman and an attitude  adjustment.

Tampa Bay will host the Buffalo Sabres on Thursday at 7:30 PM.