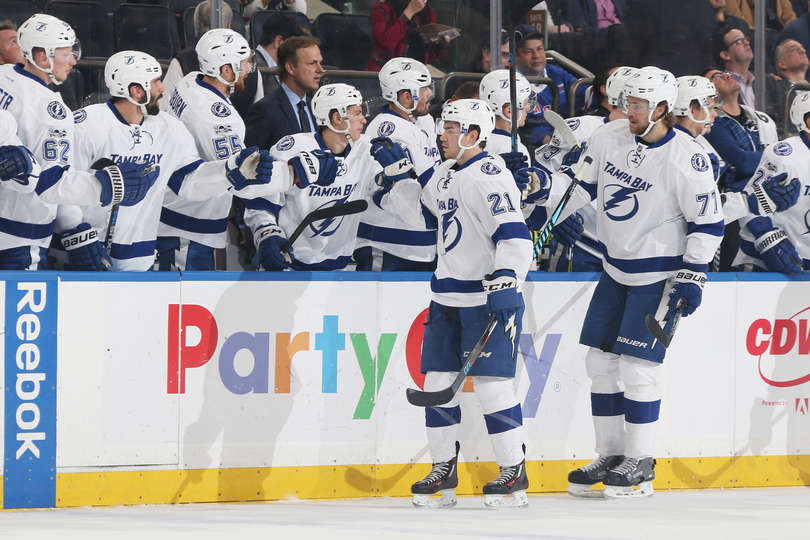 The Lightning looked to continue their winning ways in the Big Apple Monday night against the Rangers. With just 15 games left in the regular season time was running short for the Bolts to fight their way into a playoff position. Peter Budaj and Brayden Point came up huge in Tampa’s 3-2 win.

Things got off to a tepid start for Tampa, who played in their first game in a back-to-back pair on the road. Chris Kreider got a break away on the first shift but Peter Budaj came up with a big save. The Rangers struck off of the face off as Steven Kampfer scored at 5:53. The Lightning would earn the first power play of the game when Brendan Smith was sent to the box on a tripping call. Nikita Kucherov would carry the puck behind the net and pass it up to Brayden Point. Point would put the puck past Antti Raanta at 7:43 to tie the game.

"It's my birthday but here's a gift for you." – Brayden Point. #TBLvsNYR pic.twitter.com/qOPodzsHWR

Despite ending the first period with a tied score the Rangers outshot the Lightning 13-3. Budaj’s sharpness between the pipes was key through the first twenty minutes.

Tampa got off to a much better start in the early part of the second period, nearly doubling their shot total in the first few minutes. Jason Garrison took a shot from the points and Gabriel Dumont would tip it in at 5:04 to give the Lightning a 2-1 lead. The hockey gods are fickle indeed as Michael Grabner would strip Jason Garrison of the puck and tie the game at 10:22. At the end of 40 minutes the Lightning were being outshot 20-9.  It was a much better period for the Bolts who looked to take advantage of a Ranger team in the second game of a back-to-back series.

Budaj’s stellar outing continued in the third period with a sprawling save on Jimmy Vesey. Brayden Point would earn the first multi-goal game of his young NHL career by scoring his second goal of the game at 13:21. Tampa kept the pressure on in the final minutes of the game and earned their first win over the Rangers this season.
Peter Budaj earned his first win as a member of the Lightning. He stopped 26 of 28 shots faced. The Lightning tied a season low of 16 SOG but managed to get the much needed two points. The celebration continued in the locker room after the game:

Tampa Bay will travel to Ottawa to take on the Senators tomorrow at 7:30 PM