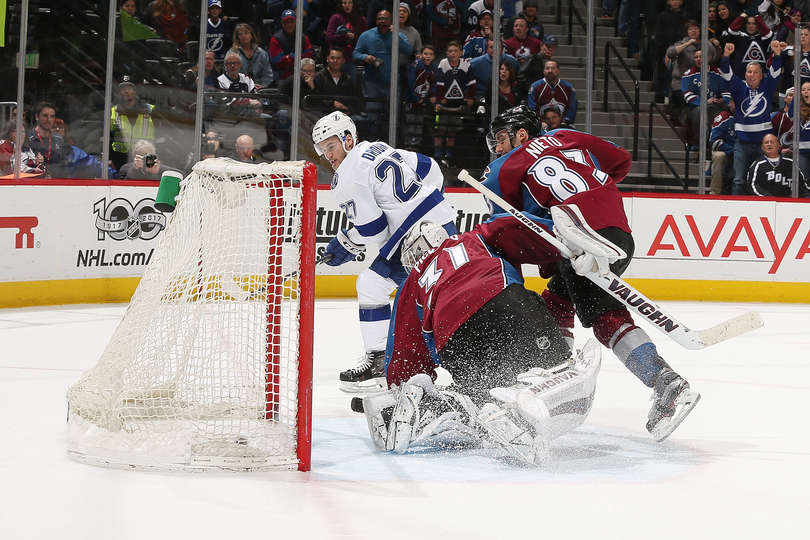 Jonathan Drouin scored at 2:27 of the overtime on a highlight reel play and Ben Bishop made 27 saves for the Tampa Bay Lightning as they beat the Colorado Avalanche 3-2 lat night.

The Lightning drew first blood at the 18:18 mark of the first period on Brayden Point‘s eighth goal of the season, assisted by Alex Killorn (14) and Victor Hedman (38).  It was Hedman’s sixth point (3G, 3A) in his last three games.

The second period saw Vladislav Namestnikov score his 17th of the year at 10:09, assisted by Brian Boyle (9) and Valtteri Filppula (23). Namestnikov fired a wrist shot from the left dot that somehow got through Calvin Pickard‘s legs for a 2-0 Bolts lead. It was the first goal in ten games for Namestnikov. For Filppula, it was his first pont in eight games.

The second period ended 2-0 in favor of Tampa Bay. Shots were 30-14 in favor of the Lightning.

Colorado’s Mikko Rantanen brought the Avalanche to within one when he scored his thirteenth of the year, from Blake Comeau (5) and Matt Duchene (20) at 2:46 of the third period.

Tyler Johnson thought he scored his 18th on a spinning backhander to make it 3-1 at 10:44, but the goal was overturned after Colorado challenged it because of offsides.

Colorado’s Matt Duchene tied the game at 19:18. His 16th goal was assisted by Tyson Barrie (21) and Nathan Mackinnon  Ben Bishop lost his stick on the play.(27).

The Bolts blew a two-goal lead for second consecutive night.

Jonathan Drouin saved the Lightning season for the time being as he scored at 2:27 of the overtime on a great individual effort by stealing the puck, splitting two defensemen and faking Pickard out of his jock.

Coach Jon Cooper on Drouin, “You get him that close to the net with the puck and little bit of time and space, he can do some pretty magical things.”

Ben Bishop on Drouin, “He wasn’t going to be denied. He was a man on a mission.”