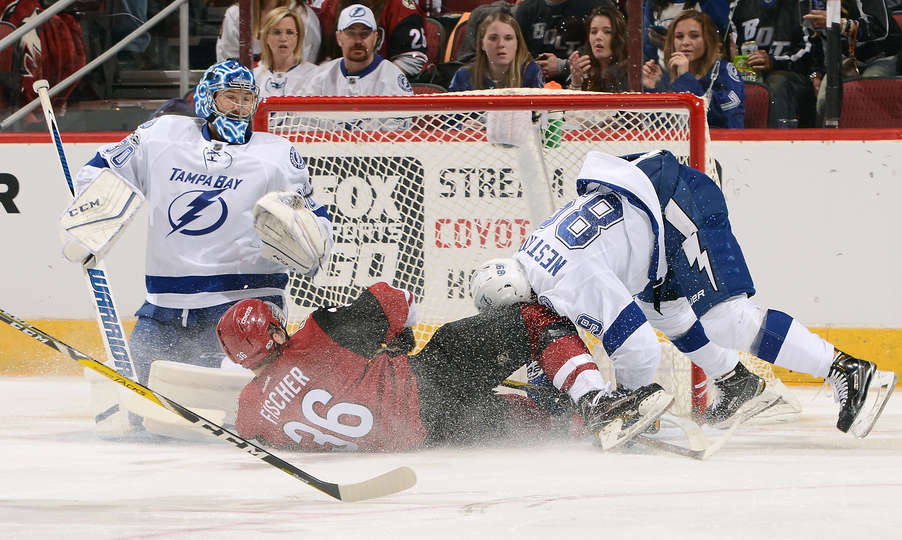 Arizona had lost four straight and 13 out of 15 coming into tonight’s game with the stumbling Tampa Bay Lightning (21-22-5). While the Bolts put up a season high 48 shots, they gave up three unanswered second period goals and lost 5-3 to the Coyotes.

The last in the Atlantic Lightning was down 2-1 with a four-minute power play. They came up empty, and Arizona scored three unanswered goals in the second period to put the game out of reach.

The Coyotes opened the scoring at 9:05 as Tobias Rieder netted his ninth of the season, beating Ben Bishop near post, assisted by Radim Vrbata (20).

Vrbata scored just two minutes later, beating Bishop short-side again. His 11th of the year was assisted by Martin Hanzal (7) and Rieder (9) at 10:19, making it 2-0 ‘Yotes.

Cedric Paquette got the Bolts on the board with his fourth, from Gabriel Dumont (1) and Michael Bournival (1) at 18:39. Dumont sent a shot at former Bolts goalie Mike Smith from the right circle and the rebound came out to the slot for Paquette, on his knees, who made no mistake. The Bolts fourth line was their best line of the period.

The Coyotes led 2-1 after twenty minutes and the Bolts led 12-8 in shots.

The second period started with Nikita Kucherov‘s first shot on goal since Tuesday’s game.  He was shut out Thursday in San Jose.

With Peter Holland in the box for four minutes for roughing, the Bolts came up empty-handed and Ondrej Palat took a penalty and then Valtteri Filppula did the same, giving Arizona a minute of 5-on-3 play. The Coyotes capitalized as Michael Stone scored his  of the season, assisted by Hanzal (8) and Vrbata (21) at 14:58.

The Coyotes Christian Fisher netted his first NHL goal at 16:25, assisted by Jaime McGinn (5) and Alexander Burmistrov (5) at 16:25.

Martin Hanzal scored his tenth at 19:44 to make it 5-1 Coyotes at the end of 40 minutes. Very bad defensive coverage on this one.

Shots after two periods were 24-17 in favor of Tampa Bay.

Ben Bishop should have had the first two goals of the period.

Andrei Vasilevskiy replaced Bishop in goal for the Lightning at the start of the third period. Bishop allowed five goals on 17 shots.

Vladislav Namestnikov made it 5-2 at 9:45, assisted by Valtteri Filppula (23) and Ondrej Palat (14). It was Namestnikov’s sixth of the season.

At 14:18, Ondrej Palat scored his tenth of the season, a power play goal, assisted by Tyler Johnson (24) and Nikita Nesterov (9).

The Bolts fall 5-3 and fall to last in the Atlantic Division.

Rookie Jake Dotchin made his NHL debut, becoming the 34th different player to play for the Bolts this season.

With this loss, the Lightning are the only sub .500 team in the Eastern Conference and only Arizona, Winnipeg and Colorado have more regulation losses (22).

Brian Boyle on being in last place, “Disgraceful.”

The Lightning’s annual organizational meetings took place this weekend, with scouts and executives gathering at a Scottsdale, Arizona, resort.

Tampa Bay will travel to Chicago to take on the Blackhawks on Tuesday at 8:30 PM.