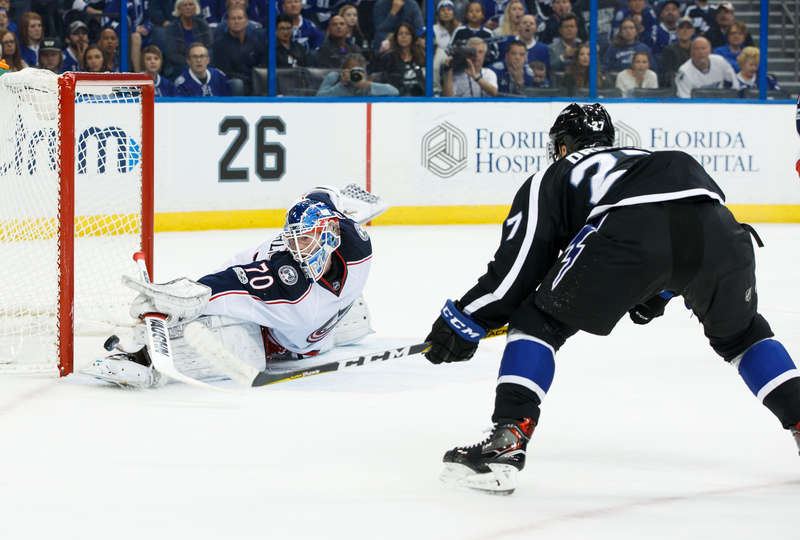 Jonathan Drouin scored for the Lightning, who have lost five of six. Andrei Vasilevskiy stopped 28 shots.

The Lightning opened the scoring at 16:18 as Jonathan Drouin netted his 13th of the year, assisted by Valtteri Filppula (21) and Ondrej Palat (13).  Drouin scored on a one-timer on the back door off a beautiful feed from Filppula to make  it 1-0 Bolts.

According to beat writer Bryan Burns, since December 1, Jonathan Drouin has 10 goals, 11 assists and a 1.11 points per game average, tied for 5th-best PPG in the NHL over that span.

The first period ended 1-0 Lightning, who also had a huge lead in shots of 10-6.

Columbus tied it up 1-1 with 3:20 to go in second period as Josh Anderson scored his tenth of the season, assisted by David Savard (10).

With Tyler Johnson in the penalty box for holding, the Blue Jackets went up 2-1 on Nick Foligno‘s 15th goal, a power play goal assisted by Zach Werenski (20) and Alexander Wennberg (20) at 4:29. The puck went off Andrei Vasilevskiy‘s skate and in.

Boone Jenner scored an empty net goal unassisted at 18:55 to make it 3-1 Columbus.

Shots ended up 32-31 in favor of the Lightning. Tampa Bay had 19 shots in the first period. They had 13 more the rest of the game.

Brian Boyle: “We had a good first period. We were pretty ordinary after that.”

Tampa Bay will travel to Los Angeles to take on the Kings on Monday at 4:00 PM, the start of a six game 13 day western road trip.