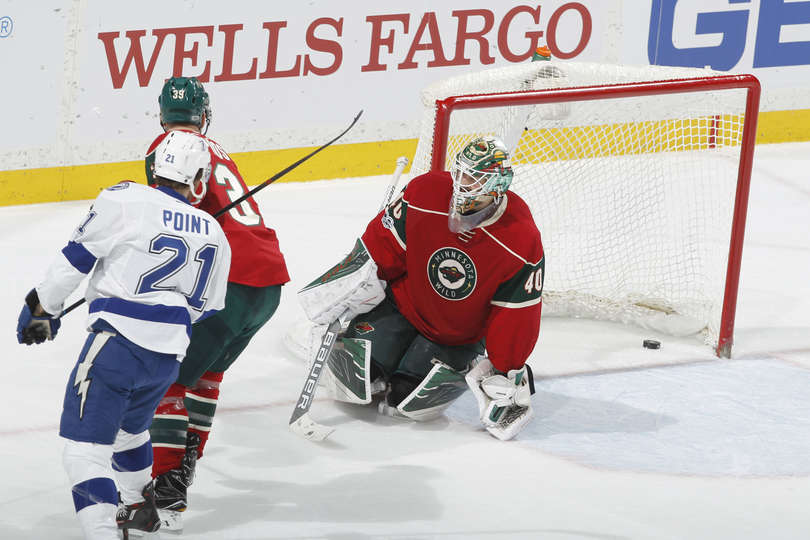 The Lightning hoped to continue their winning streak in the state of hockey Friday night in the first of half of back to back games before their bye week begins. They faced a daunting challenge against one one the league’s best teams in the Minnesota Wild.

Tampa got off to a first start in the first period. They utilized the speed that has become a hallmark of their system but didn’t shy away from physical contact. Brian Boyle‘s fight with Andrej Sustr in yesterday’s practice was the subject of a Pierre McGuire pregame interview and the big forward brought the same scrappiness to tonight’s contest. He dropped the gloves with Marco Scandella at 16:52. Each team was shorthanded once and both penalties were killed of. The first 20 minutes ended scoreless on the excellent play of Devan Debnyk and Andrei Vasilevskiy.

The teams remained evenly matched in the early part of the second period. Minnesota made adjustments to their game plan. The Wild utilized more stretch passes to spread the Lightning out and have more opportunities to get their offense going. Brian Boyle was called for tripping at 12:42 and Nino Niederreiter scored off of the rebound to get his team on the board first with a power play goal.

Jon Cooper’s team continued playing a very smart road game against a tough opponent and didn’t allow a lot of quality scoring chances. Brayden Point deflected a Jason Garrison shot past Debnyk at 17:16 and the second period ended tied up at 1-1.

The game remained tied through the third period. The action remained fast paced and the Lightning started getting shots through to the net as regulation time wound down. Vasilevskiy kept his team in it with timely acrobatic saves. After 20 minutes the Bolts earned a hard fought point and took the game to overtime.  Tampa’s netminder was the star of the three-on-three period and shut down some choice Minnesota chances to keep the game tied.

Wild captain Mikko Koivu scored the lone shootout goal to give his team the 2-1 victory. Brayden Point, Jonathan Drouin, and Nikita Kucherov were the shooters for Tampa Bay.

Tampa Bay will travel to Winnipeg to take on the Jets on Saturday at 7:00 PM.