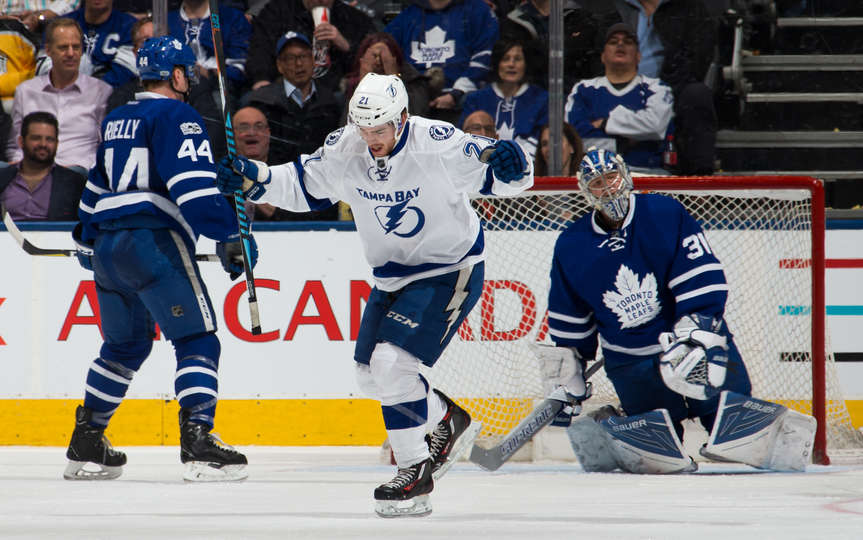 Nazem Kadri scored the only goal for Toronto.

The scoreless first period was a fun filled physical one that was dominated by the Lightning early on.  They were outshooting Toronto 7-2 at one point and shots ended up 13-11 Tampa Bay after 20 minutes. The Lightning outhit the Leafs 16-4, but again were outclassed in the faceoff circle 17-7.

The second period started with the Bolts killing off a Braydon Coburn penalty and then Coburn and Matt Martin dropping the gloves because he pushed Auston Matthews  into the net.

With Roman Polak in the penalty box, the Lightning took a 1-0 lead on a Brayden Point one-timer power play goal off a nice feed by Ondrej Palat at 7:34. Point’s 15th goal was assisted by Palat (33) and Victor Hedman (53). Hedman’s assist was his NHL leading 29th with the man advantage.

The Bolts went up 2-1 at 11:50 when Nikita Kucherov stickhandled through three Leafs and scored his 39th of the year on a snipe that eluded Toronto goalie Frederik Andersen. Victor Hedman (54) assisted on the goal. With the assist, Hedman tied Erik Karlsson for most assists by a defenseman this year.

Accumulative shots were 23-22 in favor of Tampa Bay. The Lightning also led in hits 24-17. The Bolts had only won 36% of their faceoffs.

The Bolts went up 3-1 at the two minute mark of the third period when Michael Bournival scored his second of the year from Andrej Sustr (11) and Victor Hedman (55). The assist was Sustr’s third in the last five games. It was a huge goal by the fourth line.

Brayden Point scored his second of the game and 16th of the year at 14:11 on a wicked wrister that beat Andersen up high to make it 4-1 Lightning. The four-on-four assists went to Ondrej Palat (34)) and Jake Dotchin (9).

“At this point, all we can do is put a little pressure on. And obviously hope that Pittsburgh plus Columbus do their job.” – Anton Stralman

“We had to win this game. And I think we played like it.” – Brayden Point

Tampa Bay will travel to Montreal to take on the Canadiens tomorrow at 7:30 PM..