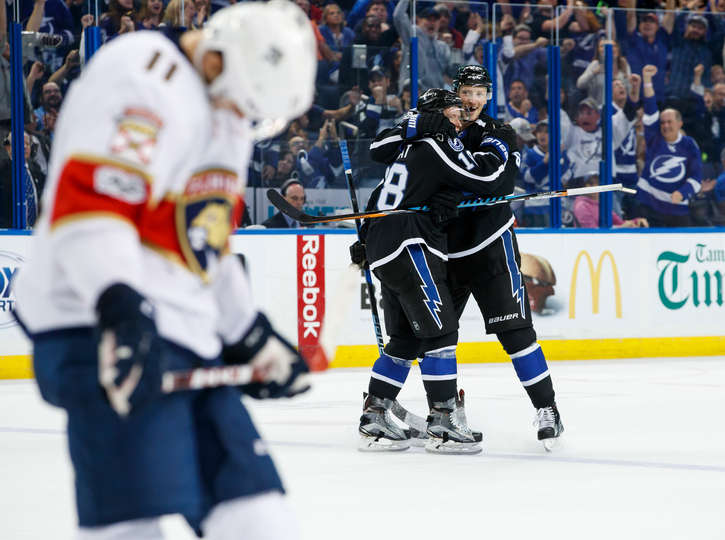 Ondrej Palat scored with just over two minutes remaining in the third period to lead the Tampa Bay Lightning to a comeback 3-2 victory over the Florida Panthers at Amalie Arena on last night.

The physical first period set the tone for this one as J.T. Brown and Luke Witkowski dropped the gloves early on.

After a big save by Andrei Vasilevskiy, the ageless one, Jaromir Jagr picked up the rebound and scored his 14th of the season to put the Panthers up 1-0 at 16:32. The goal was assisted by Jonathan Marchessault and Aleksander Barkov.

The Panthers Mark Pysyk scored his fourth of the season at 19:13 from Reilly Smith and Aleksander Barkov to put Florida up 2-0.

Shots for the period were 13-12 in favor of Florida.

The second period saw the Lightning get one back as Nikita Kucherov scored his 31st, a career high. The power play goal was assisted by Victor Hedman (45) and Jonathan Drouin (25).

Anton Stralman put on a hip check clinic in the second period as the game got nasty.

Yanni Gourde stole the puck at the Bolts blueline, fought off Vincent Trocheck and beat James Reimer for his first NHL goal, the shorthanded variety, at 10:11. The spectacular goal tied the game at two.

Through two periods 50 minutes combined in penalties had been whistled in the rough and tumble game.

Andrei Vasilevskiy was sparkling again stopping 32 shots. He won his sixth straight 30-save game and is 5-0-1 since taking over as the number one goalie  job.

“It is desperation mode and the guys are playing with it,” said coach Jon Cooper.

Cooper on Ondrej Palat,” Arguably the best player on the ice. He was a stud.”

Jonathan Drouin credited Lightning’s 5-on-3 penalty kill for changing the game, “We definitely grabbed momentum from that.”

Tampa Bay will travel to New York to play the Rangers on Monday at 7:00 PM.