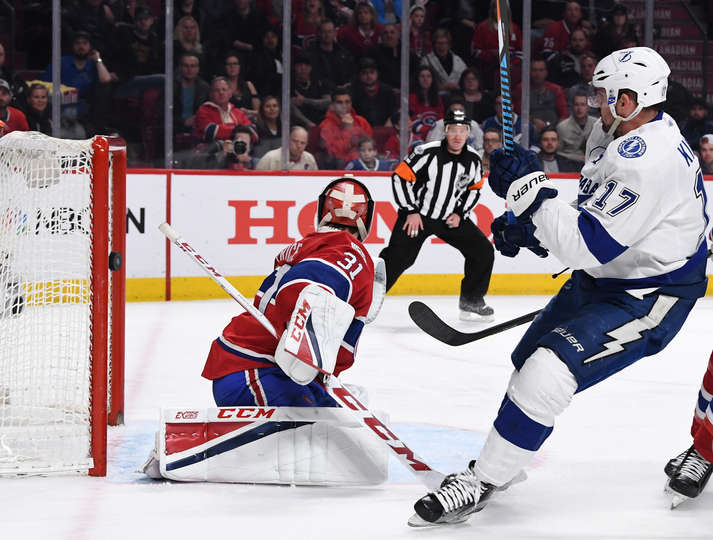 The Lightning has one game remaining on Sunday against Buffalo. Tampa Bay would be eliminated if the Maple Leafs win either of their two remaining games, against the Pittsburgh Penguins on Saturday or against the Columbus Blue Jackets on Sunday.

In the first period, the Lightning came out flying, playing with the desperation they needed to.

In the first seven minutes of the game, Tampa Bay outshot the Canadiens 7-1 but couldn’t solve Carey Price despite some good chances.

Despite playing in back-to-back games, goalie Andrei Vasilevskiy was brilliant making acrobatic saves to keep the Habs off the board. He made a spectacular behind the back, left leg pad save to stop a Philip Danault wraparound bid.

At 11:42 Tampa Bay struck first as “Big Goal” Yanni Gourde corralled a Nikita Kucherov, off the post rebound and put it past Price for a 1-0 Bolts lead. Gourde’s fifth goal was assisted by Kucherov (44) and Luke Witkowski (4).

Nikita Kucherov‘s assist tied Martin St. Louis in 2007-08 for fifth most points in a season (83) by a Lightning right wing (top four all held by St Louis).

Nikita Kucherov scored his 40th of the season at 19:50 on a partial breakaway that he fired over Price’s shoulder for a 2-0 lead. Assists were credited to Ondrej Palat (35) and Brayden Point (21). Palat made a highlight reel stretch pass to send Kucherov away.

The second period saw the Canadiens cut the lead in half when Dwight King scored his ninth of the season as the Bolts defense let him get behind them and he went in on Vasilevskiy all alone and beat him five hole at 9:59.

Alex Killorn gave the Lightning a 3-1 lead beating Price against the grain for his 19th of the year, assisted by Cory Conacher (2) at 14:19. The play was started when former Tampa Bay defenseman Nikita Nesterov turned the puck over. It was just the third goal in the last 26 games for Killorn.

Shots on goal after two periods were 17-15 Lightning.

Montreal turned up the heat in the second period, but Vasilevskiy remained solid in pursuit of his first back-to-back wins (0-4-1).

With 15:24 to go in the third, the Canadiens Artturi Lehkonen scored shorthanded as the puck caromed off Victor Hedman‘s skate and by Vasilevskiy.

The Lightning immediately retained their two goal lead on the power play when Yanni Gourde netted his second of the game and sixth of the season from Cory Conacher (3) and Jake Dotchin (10) at 4:57.

Vasilevskiy made a second highlight reel save as he dove to thwart Alexander Radulov‘s scoring attempt.

Montreal pulled Price with 2:07 remaining during a power play to gain a 6-on-4  man advantage but the Bolts and Andrei Vasilevskiy were too much for the Habs as time ran out and the Bolts kept their slim playoff hopes alive.

Shots ended up 29-22 in favor of  Montreal. Tampa Bay was four-for-four on the penalty kill.

Andrei Vasilevskiy played like a number one goalie and was brilliant, especially in the third period.

Yanni Gourde has become master of the big goal and potted two of them tonight.

“It was spectacular. He was making soccer saves.” – Anton Stralman on Andrei Vasilevskiy’s save on Radulov.

“Sometimes you have to do some desperate stuff. And I did it. And I got lucky.” – Andrei Vasilevskiy on backwards, splits save in first period. Tampa Bay will host the Buffalo Sabres in another must win game on Sunday at 5:00 PM. It is the last game of the regular season.