Game Recap: Tampa Bay Rallies Back With Four In The Third Period To Beat Chicago 5-2 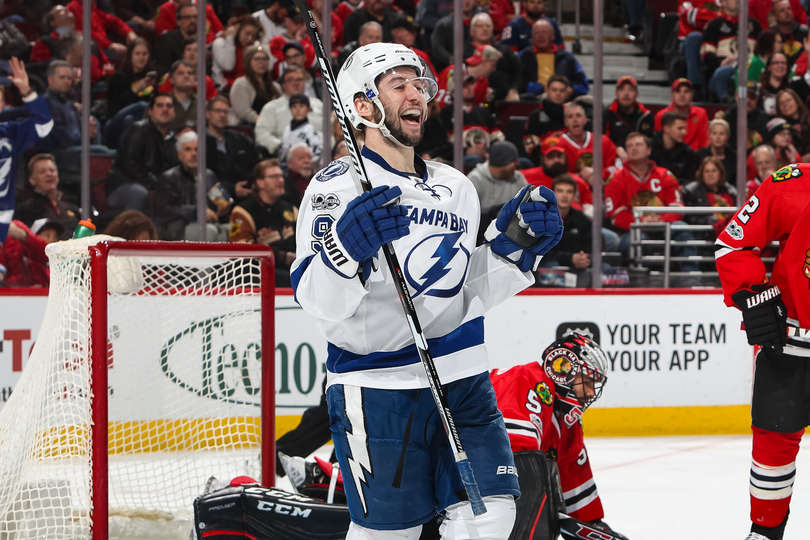 They’re not dead yet. The Tampa Bay Lightning scored four unanswered goals in the third period to beat the Chicago Blackhawks 5-2 last night at United Center in Chicago.

The Lightning had lost its past three , but improved to 2-2-1 on a six-game road trip and 8-0-2 in its past 10 regular-season games against the Blackhawks .

The Bolts got a goal and an assist from Brian Boyle, and two assists from both Valtteri Filppula and Alex Killorn. Goalie Andrei Vasilevskiy was brilliant, making 34 saves, many of them big ones.

“We needed that,” Lightning coach Jon Cooper said. “It was a 2-1 game going into the third and we felt we were getting chances in the game. We just had to stick with it. Give Chicago credit, though. They pressed to get back in, and some nights you need your goaltender to be your best player, and he was tonight.”

“It’s big for us,” Tyler Johnson said. “Every point matters right now, so we needed to get that in the third period. We talked about it during the intermission. The Blackhawks are a good team, so we knew it was going to be tough, but we liked our chances the way we were playing the first two periods.”

Johnson’s first goal put the Lightning up 3-2 and rewarded Alex Killorn for a jaw dropping drop pass in the offensive zone. Johnson shot past Crawford, over his right shoulder to the far side from the right circle for the game winner.

The highlight goal of the game was scored by Brian Boyle. Filppula srtole Duncan Keith‘s pass into the Lightning zone, then sent a world class stretch pass to Boyle who split Keith and Niklas Hjalmarsson in the Chicago zone and beat Crawford with a backhand-forehand move as he was being checked to the ice.

“This is desperation mode for us, and this was a winnable hockey game”, said coach Jon Cooper. “We felt every one of these games on this trip has been winnable, and unfortunately we only have two wins to show for it. But a lot of good things came from tonight.”

Lightning defenseman Jason Garrison skated in warmups but sat out his second game with an illness. Tampa Bay forward J.T. Brown returned after missing seven games with an upper-body injury.

Tampa Bay will travel to Sunrise to take on the Panthers on Thursday at 7:30 PM.