Gamecocks go for a bowl game 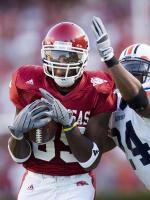 After one of the greatest victories in South Carolina’s history, the team will travel to the far corner of the southeast; some might not even consider it the southeast. USC will play Arkansas, the home of Bill Clinton, Wal-Mart and Billy-Bob Thornton, on Saturday at 12:30 est. Arkansas will start a freshman QB Casey Dick who has not started a game yet in the fierce SEC. Arkansas has not won a game in the SEC this year and is looking to start a freshman against a defense that is slowly becoming a decent defense. I don’t really agree with Houston Nutt’s decision to take the red-shirt off his prized freshman this late in the season.

Here is the prediction for this weekend from CFN.

Why to watch: When Steve Spurrier took over South Carolina, he tempered talk of winning the SEC title by saying he just wanted to get to a bowl game. After a program-changing win over Tennessee last week, the Gamecocks can become bowl eligible with a win at Arkansas and can be in a position to finish second in the East if they can beat Florida next week. But first off, they have to deal with a desperate Arkansas team on a two game losing streak and is still searching for its first SEC win. Despite all of the problems, a win here might mean the Hogs have a shot at a wining season with winnable games against Ole Miss and Mississippi State ahead before the season finale against LSU.
Why South Carolina might win: After winning in Tennessee, playing at Arkansas won’t be that intimidating. The Gamecock offense has exploded on bad SEC teams scoring 44 on Kentucky and 34 against Vanderbilt. The Hog defense gives up a ton of yards with a pass defense that struggles with its consistency. USC’s passing game might not be unstoppable, but it’s good enough give the Hogs a nasty time.
Why Arkansas might win: South Carolina isn’t all that great against the run. The Gamecock run defense got bowled over by Alabama and pounded on by Tennessee, and its in for a long game against the SEC’s number one rushing attack that averages 257 yards per game. The Hogs had better run effectively because …
Who to watch: … it’s starting a freshman quarterback. Casey Dick will lose his redshirt status and try to breathe some life into a dead passing attack. He’s a good-sized passer with a nice arm, and he can also run a little bit. South Carolina freshman WR Sidney Rice has turned into one of the league’s top receivers catching a touchdown pass in a school-record seven straight games. He has been on fire over the last three games catching 24 passes (8 in each game) for 369 yards and seven touchdowns.
What will happen: Arkansas won’t be able to get the job done with a freshman quarterback. The Hog defense will keep it from being ugly, but the Gamecocks aren’t going to blow its big chance to become bowl eligible.
CFN Prediction: South Carolina 24 … Arkansas 20