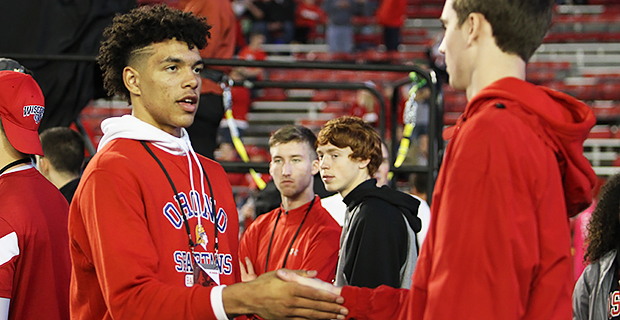 The players who were expected to make up the 2017 Wisconsin Badgers men’s recruiting class were known a long time ago. On Wednesday the trio of Brad Davison, Kobe King and Nathan Reuvers made it official by signing their national letters of intent.

Wisconsin not only has three players to add, they have one of the top recruiting classes in the country and it is in large part to the groundwork laid by head coach Greg Gard who was more personally involved in these players’ recruitment than just about any coach in the country.

His duties as an assistant up until the halfway mark of last season made that possible.

Gard finally got the chance to speak on the newest members of the program following their letters of intent being faxed in this morning.

“All three of these student-athletes have a skill set, mindset and toughness about them that embodies what we are about as a basketball program,” Gard said. “But more importantly, they each have the characteristics as human beings that we hold in the highest regard. We are very excited about adding each of them to our program and to our community.”

The longest standing member of this class has been in-state shooting guard Kobe King (La Crosse, Wis./Central). He ended up ranked as the No. 168 player in the country and the No. 3 ranked player in the state of Wisconsin.

However, he is on the verge of becoming an all-time great in Wisconsin state high school basketball. King enters his senior season as the second-leading scorer in La Crosse Central history with 1,304 career points.

Gard sees King as the glue to this class and most importantly a player that provides a lot of versatility to the program going forward.

“Kobe committed to Wisconsin very early in the process, and because of his loyalty to this university and his excitement to be a Badger, he never wavered from that commitment,” said Gard. “He has really developed into a player that can score at three levels: attacking the basket, mid-range jump shots and from behind the 3-point arc. In addition, his athleticism should allow him to develop into a very good defender. Kobe has done an outstanding job at setting an example for others in the classroom as well.”

Wisconsin’s next addition is also its highest rated player, with 6-9 forward Nathan Reuvers committing back in May. He is ranked as the No. 65 player in the country overall per 247Sports and the No. 15 power forward in the country.

Reuvers adds a lot to an already impressive frontcourt for the Badgers, and may be the most athletic of the bunch that will be around next season in Madison.

“Nate’s commitment to academic excellence is extremely impressive, even on a national level,” Gard said after receiving Reuvers’ NLI. “On the court, he has a tremendously diverse skill set that should ultimately allow him to be effective from the post, off the dribble and from the perimeter as a shooter as well.”

He finished his junior season averaging 19.8 points and 8.2 rebounds per game. Reuvers shot 58 percent from the floor, 41 percent from 3-point range and 81 percent at the foul line as well, showing his versatility and athletic ability at 6-10 tall.

The last piece to the puzzle and perhaps the most important given the exit of Bronson Koenig after this season was 4-star point guard Brad Davison. He comes to the Badgers as the No. 81 ranked player in the country by 247Sports and the No. 18 point guard in the country as well.

Davison is a two-sport star, also playing the role of quarterback for his high school football team. He led them to the Minnesota 6A quarterfinals this fall.

That leadership stands out to Gard, along with his ability to shoot from just about anywhere on the court.

“Brad brings a tremendous toughness and competitive spirit to both ends of the floor,” said Gard. “He has the ability to play both the point guard as well as the off guard position. His experiences as a high school quarterback will serve him well as he makes the transition to a collegiate basketball player. He has been a leader at Maple Grove in the classroom, on the court, on the field and in the community.”

It all led to the Badgers having the No. 10 ranked recruiting class in the country according to 247Sports and the No. 2 class in the Big Ten.

Let that soak in for a minute…the Badgers are recruiting and getting in the mix with some of the biggest names on the college basketball scene — and winning.

So, those who believe the best days of Badgers basketball are behind or just plateauing, this class should have you thinking twice about that (at least on paper).