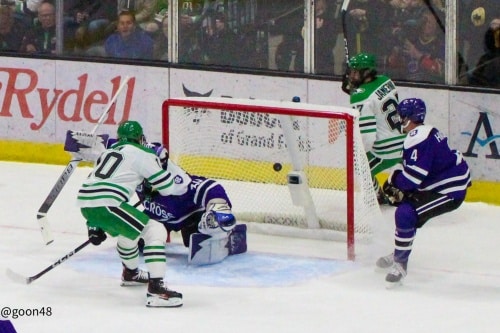 On January 7, 2022, University of North Dakota senior forward Gavin Hain sustained a season-ending knee injury (ACL/MCL) in a non-conference game against the Cornell Big Red. Hain’s injury would prove to be a significant loss for the Fighting Hawks, he would miss the rest of the season and not play another game until last weekend’s exhibition against the Manitoba Bisons. Last Saturday, you can imagine what Hain was feeling.

“The emotions kind of kicked in during the Manitoba game,” Haid said. “I was out there for the first time in warmups and didn’t know what to do. I felt a little out of place, but it didn’t take long to get back into the swing of things and be comfortable with where I’m at. It was more Manitoba game, I think this game I felt pretty comfortable right away. So that is a good thing.”

In the offseason, Hain decided to come back for his fifth year. At first look, it appears to be a great decision.

“It was in the back of my head especially after I got hurt, Hain said. “You never want to end your career like that. I had conversations with the coaches, and it felt right. You get a chance to come back to a place as special as this… Our goal this year is to hang a green banner, and I’ve yet to do that during my time here. When you get a chance from the coaches to come back to a place like this, it’s pretty easy (decision).”

Post-injury, it was hard for Hain to sit in the stands watching his teammates play without him. He was relieved to be back playing hockey.

Yeah, it’s awesome,” Hain said. “It’s one thing when you’re up in the stands watching the team in the crowd, it’s not the same thing as being on the ice, being out battling with your brothers, and having the crowd on top of you, it’s a pretty special thing.”

Hain said it was a tough summer getting back into game shape, so he could play with his teammates when the regular season started.

“Watching the team all last year, you hate to watch your teammates battle with you,” Hain said. “I had a tough summer, there’s a lot of work to get back to where I wanted to be at the start of the year here. It was a long, hard summer, and to be able to be where I’m at right now. I’m pretty happy.”

“It was a long process to rehab and get ready to come back in, but I think he looks really good, head coach Brad Berry said. “He’s excited to play, and I think it’s a situation here where he’s going to get better and better just by getting more game experience after being on for half a year.

Hain made the most of his return to the ice, he scored a goal in the first period, of his first regular season game.

Feels good to see No. 10 finding the back of the net again! #UNDproud | #LGH pic.twitter.com/gHeZus8OfV

Looking forward to this season, Hain and Senden returning for the fifth year is a big deal for UND. Before Hain’s injury, the Hain, Jamernik, and Senden line played against the opponents’ top line. They’re miserable to play against and leave little time and space on the ice.  While might not rack up a lot of points, they do the little things that might go unnoticed until you look at the box score at the end of the night. There’s also a good chance they’re going to be together as a shutdown line.

“There’s not a lot of time and space,” Berry said. They track pucks — they protect pucks in the offensive zone, and you know, that they’re coming in. It’s a situation where I think we’ll do that (keep them together). At the end of the day, they do bring some certainty into your group.”

Still not convinced. Consider this.

Last November, against the Denver, Hain, Jamernik, and Senden. shut down the Pioneers’ top line of Carter Savoie, Cole Guttman, and Bobby Brink. Mission accomplished. That line entered NCHC play as one of the top forward lines in the conference, collectively they had scored (12g-18a–30pts) in six games. In their two-game series against the Hawk, that line didn’t record a single point. That’s not a typo.

During game one, the shutdown line became an offensive juggernaut.

“We’ve got the chemistry from the last couple of years,” Hain said. “We have it in our bag so we can be a good two-way line. I think that’s what we’re trying to do. We’re going to try to get some goals and shut down when we need to.”

Checking the box score, against the Crusaders, the shutdown line scored two goals and five points. They were also a plus-six. 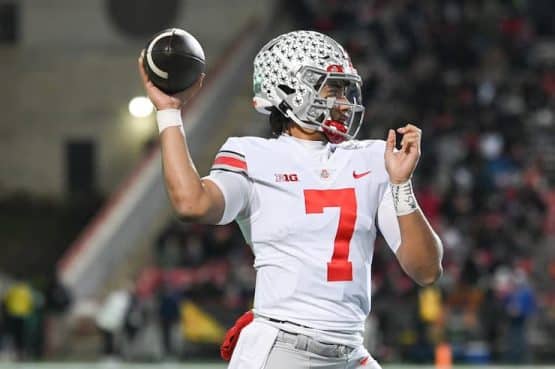 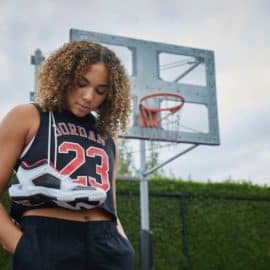 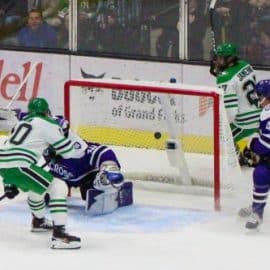