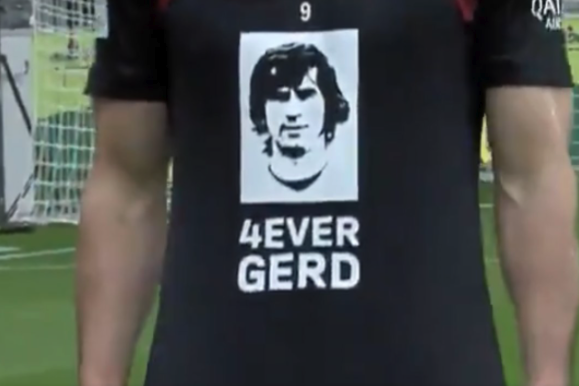 German soccer star Gerd Muller of Nordlingen, Germany passed away at the age of 75 on Sunday according to Reuters. The cause of death was Alzheimer’s Disease, where he was first diagnosed with in 2015.

Muller, who was a prolific striker, is considered one of the greatest German soccer players of all-time. He had a record 365 goals in 427 Bundesliga games with Bayern Munich from 1964 to 1979. Current Bayern Munich striker Robert Lewandowski of Warsaw, Poland is second on the list with 278 goals.

In 1971-72, Muller set the Bundesliga single-season record for most goals in a season with 40. The record stood for almost two decades before Lewandowski scored 41 goals in 2020-21.

In 1970, Muller was the first ever German player to win the Ballon d’Or, presented to the best European soccer player of the year. In the voting, Muller received 77 points, seven more points than Bobby Moore of Barking, England, who had 70 points while playing for West Ham United.

At the 1970 World Cup in Mexico, West Germany finished in third place behind the champions Brazil, and Italy, who was the runner-up. However, it was Muller, who won the Golden Boot with 10 goals. He had three more goals than Jairzinho of Brazil, who was in second place with seven goals. Muller had a hat trick in a 5-2 West Germany win over Bulgaria in Group 4 action, and then had another hat trick in West Germany’s next game, in a 3-1 win over Peru.

West Germany then hosted the 1974 World Cup, and beat the Netherlands 2-1 in the final from Munich. Muller had four goals in the tournament to lead West Germany, including the game-winning goal in the 43rd minute in the World Cup Final. The 1974 World Cup in Munich came only two years after one of the most devastating terrorist attacks in the history of organized sport. At the 1972 Olympic Games in Munich, 11 Israeli athletes were killed by Palestinian terrorists. Germany has not hosted an Olympic Games since.