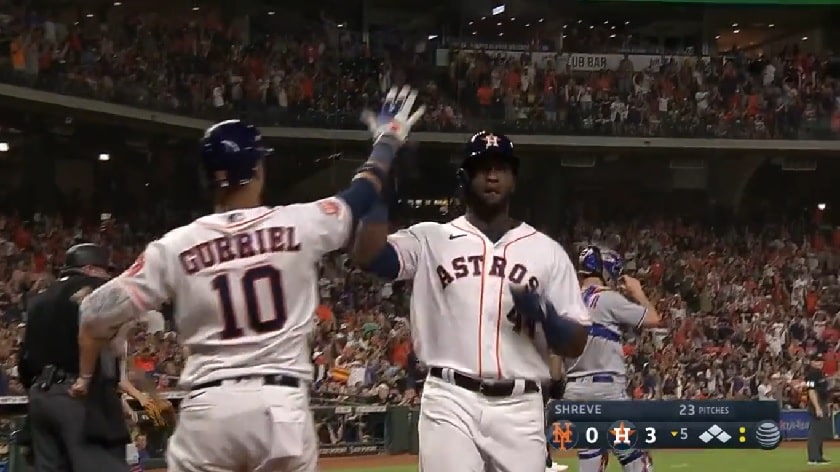 So it was hinted to me today that this is one of those “benchmark” series to see where the Mets are in relation to the best teams in the league. I would argue that the 2022 Mets have long since proven that they were good, having won a few games against the best teams in the league. Besides, the pitcher they got to pitch games like this was in Binghamton rehabbing while the big club went with Trevor Williams tonight, so forgive me if I’m not buying that this game was a true measuring stick.

Thank goodness for that.

Williams was fine to start, but gave up a Crawford Box home run to Jose Altuve and a missile to Yordan Alvarez in the third to make it 3-0 Houston. But in the 4th, the Mets attempted their patented move of scoring immediately after the other team scores on you, loading the bases with one out. Singles by Pete Alonso and Mark Canha did the trick along with an error by Yuli Gurriel. So it was up to Jose Urquidy to escape. He struck out Eduardo Escobar on a curve, then struck out J.D. Davis on a high fastball, which is probably the only thing a pitcher should ever throw to Davis these days. Remember when I said the other day that I had jokes about J.D. Davis and high fastballs? Well I got to save it for a special occasion as his strikeout on a high fastball didn’t mean anything yesterday. But it did today so here it is:

“J.D. Davis lays off high fastballs the way I lay off Oreos.”

It’s the perfect dichotomy of joke, as it makes fun of Davis’ propensity for swinging at and missing high fastballs, but it’s juxtaposed against my lack of will power against Oreos while simultaneously illuminating the fact that while J.D. Davis is a major league baseball player, I’m a cookie eating loser. So I can make all the jokes and eat all the cookies I want, but I’m not in the major leagues. See how that works?

As the Astros put the game away in the 5th thanks to a three run double by Kyle Tucker, this allowed me to discuss the finer points of Oreos vs. Chips Ahoy on Twitter. It’s good that I can do that instead of overreacting to one loss against one of the best teams in baseball with Trevor Williams on the mound. I’ve come a long way. Besides, the Braves and Phillies both lost so this day on the calendar was simply a wash, save for the scintillating discussion regarding Oreos vs Chips Ahoy that I’ll remember way more than any Chasen Shreve meltdown.

The Mets will only take a loss for the day if they visit Cooter’s after the game. Google it, kids. (But don’t look for it on Google Maps … it doesn’t exist anymore.)