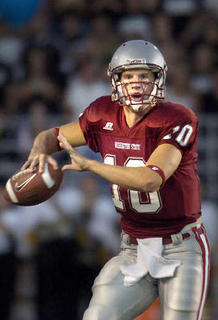 First, a good read on Brink from the Spokesman:
http://www.spokesmanreview.com/sports/story.asp?ID=92501

Finally, a really quick look at OSU and where they stand in team stats (in order of importance):

1) Scoring defense – LAST in the Pac-10 at 36.5 PPG. Yes, this is skewed because of the 63 Rick Pitino’s kids hung on them over a week ago (just kidding, sort of?). But they have been giving up points, even to Boise State at Reser, who is clearly down this year! That’s huge.

2) Pass defense – LAST in the Pac-10 in yards AND, more importantly, a whopping 14 TD passes allowed in 4 games!

The numbers, however, can be somewhat misleading. First, they have played two extremely strong passing offenses, Louisville on the road in a 9 AM game, and ASU who can throw it with anyone in America. But, there is a huge flaw, and that is they are giving up TD’s!

As Charlie Weis said this week in an interview, you’re seeing an interesting trend right now with defenses. Before it was the pressure, Chicago Bear-46 D where they put 8 in the box, bring the house and take your chances with man coverage. But you see so many teams spreading the field as well as mobile QB’s that can get away from pressure, and suddenly defenses started giving up huge plays. Now, you’re seeing teams give up yards these days, both in the NCAA and NFL levels, in a bend-but-don’t-break mentality. Keep everything in front of you by dropping the safeties in a deep cover-2. Let them pile up yardage between the 20’s, and give up the stuff underneath. The Patriots won 3 of the last 4 Super Bowls with a strong D, but they were never dominating, never ranked #1 in the NFL in defense. They bent but they almost never “broke” when it mattered. He said when teams get in the red zone, that’s when Romeo Crennel would turn up the heat by blitzing more from every possible angle, drop up to 8 guys into coverage, you name it!

Classic example is look at ND at UW – UW put up a lot of yards through the air, enough that one might think they could have won that game, yet on the scoreboard it was a blowout, a game which really wasn’t in doubt from the 2nd quarter on. Lots of passing numbers, but when push came to shove, ND threw the kitchen sink at them, mixed things up, sometimes dropping 8, sometimes bringing heat, and Stanback didn’t know whether to run or throw. That pick he threw in the end zone to kill a drive, you could almost read his mind in that he just didn’t know what to do, so he just sort of flipped it right to the nickel back! So, UW was held to 10 points when it really mattered, getting a garbage-time TD when it was 36-10.

The bottom line? Defensive stats are misleading in terms of pure yardage, when you have coaches basically conceding they are going to prefer to give up short stuff in order to protect against the big play! Easier said than done for Notre Dame, where they gave up 44 vs. Michigan State, but that’s exactly what you saw vs. UW.

The biggest thing for the Cougs? Get the ball in the end zone, don’t just settle for field goals! The Beavs just aren’t keeping people from scoring TD’s. 14 TD passes already surrendered? With our skill position players, Hill, Bumpus, Bienemann, Jordan, a strong running attack with Harrison, AND a smart kid like Brink to spread the wealth?? Those guys must be licking their chops watching film right about now! The “Chipmunks” truly do miss their DB’s like Meuweesen and Browner, two big-time guys from last year.

The early line I’ve seen so far as Beavs getting 2 points at home, which really, is a slight lean to WSU, knowing that home teams always get 3 points to begin with. I’m not ready to predict this one yet, and hell, we NEVER play well at Corvallis, but the early feel has to be good right now!