good times in Tampa for the Carolina Panthers 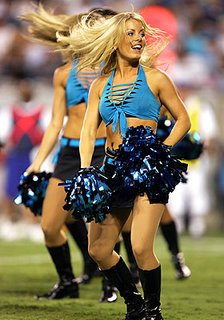 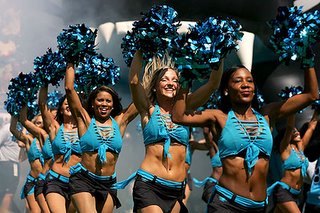 Not only did the Panthers beat the Bucs in Tampa, there cheerleaders got drunk and had sex with each other at a bar. Good times. Check this out!

The Charlotte Observer initially reported that a police report indicated Kristen Owen, 22 and Angela Keathley, 26, were arrested after an incident at Banana Joe’s in the city’s Channelside district. One cheerleader was charged with battery, the other with disorderly conduct and resisting arrest.

However, according to a report by Charlotte’s WCNC-TV, police have since questioned the identity of one of the cheerleaders, saying another woman may have tried to dupe them by using Owen’s drivers license. Police said they have opened an investigation into the identity issue, and a Tampa TV report indicated that police now think that the woman who identified herself as Owen is in fact another Panthers cheerleader, Renee Thomas.

WCNC-TV reported that Owen’s mother claimed Owen was at a wedding South Carolina at the time of the arrest.

Keathley, whose identity has not been disputed, was escorted out of the bar, and the police report said she was so drunk she could barely stand. Police also described her as rude and belligerent toward them.

The Observer also reported that other Panthers cheerleaders bailed the two out of the Orient Road Jail late Sunday morning.

According to the Observer report, Keathley and the other cheerleader made the trip to Tampa on their own as they are only on the sidelines for home games.

Team officials at Sunday afternoon’s game said they were aware of the report, but declined further comment.