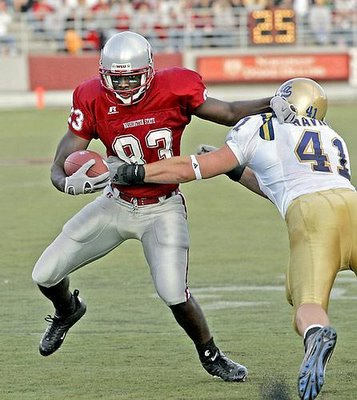 First, the really huge stuff – HILL IS BACK.

I know, I know, if he would have announced he was going pro, I probably would have been on here to say that we’ll be ok, and I would have highlighted the returning guys like Bumpus, Jordan, Gibson, and TE Boyd to go along with a whole rash of newcomers. BUT when you can bring back what is easily the #2 WR in the Pac-10 (next to Dwayne Jarrett, who I believe will leave USC after next year as one of their greatest WR’s ever), well, it’s GIGANTIC.

Think of the security blanket of having #83 on the field. Think of how huge he was when healthy, 240 yards and 3 TD’s on the road vs. Cal? He’s a tremendous player, and when you can return a potential first-team all-American candidate and a 1st-2nd round NFL draft choice to what is going to be a potent offense, it’s A GREAT DAY.

We might be REALLY good next year, as in 8-9 wins good, if as Lawson says – the D improves. Is there reason to think that will be the case? Absolutely. The d-line will be better with Johnson and Ropati healthy, along with an improving Ahmu for depth. They have host of choices to replace Braidwood at one D-end, while Mkristo is set to have a huge double-digit sack senior season (by the way, he ran on the court last night waving a small WSU flag after the upset at UW!). The LB’s will be better, as Trent won’t be so scared and you will see a hell of a lot more instincts and reactions vs. thinking too much and being two steps behind. Davis and Dildine will be solid on the outside. The DB’s will be better as well, I love our safety combo of Frampton and Abdullah but I think the corners will be much better as Brackenridge has his house in order and is regarded as the best pure cover CB we have.

Add it all up on D? With the kind of scoring ability we are bringing back next year, even if the WSU D improves to 5th in the conference, which is a big possibility, then 9 wins might be a cinch!! We can break this thing down deeper after spring ball, see what shakes out, who emerges, who gets hurt, etc, but I couldn’t feel any better about next year than I do right now. Hill is our superstar, our Reggie Williams type player and with all his ability and his desire for a scary senior year, there are a lot of Pac-10 d-coordinators shaking their head, thinking “how the hell are we going to stop that passing game next year??”

Other quick stuff – our source tells me that the first phase of stadium renovation will begin as soon as the 2006 season ends. Phase 1 is going to be the stadium way renovation, where it will be totally opened up as the grand entrance to the stadium. More seats will be added, all the concessions will be improved, etc. That’s the good news.

The bad news? Fund raising just hasn’t been what they hoped. Many “whales” just haven’t stepped up like they were planning. And, the ones that are writing checks are contributing far smaller amounts than originally hoped. BUT, Rawlins and Sterk are feeling serious heat right now to, as they say, “get the shovels in the ground” and start building something to show the donors, get some momentum going towards what they ultimately envision as a serious jewel of a stadium!

There are some other things they are working on, such as naming rights to the field/stadium, and even a Safeco-Field type idea of selling bricks with donor names on them, things like that. Once this silent phase of fund-raising ends, things will become public and the serious money time will be here. I know I’ll be ready to contibute whatever I can, at least in buying season tickets next year.

Recruiting is coming along, with a serious sleeper the Cougs just landed. Kevin Kooyman was not only a state champion wrestler, but an all-SPSL performer on O and D. 6-6 and 215 and supposedly an exceptional, fluid athlete with 4.6 quicks, he had been under the radar for a while yet recruiting heated up late for him. Maybe another sleeper in the Rien Long – Mkristo Bruce mold of tall and athletic? Maybe that 215 will turn into 265 as a pass-rushing D-end, just like Mkristo?? We shall see.

The other huge get of late is Anthony Houston, a 6-4, 200 lb, 4.5 speedy WR from San Diego and was heavily recruited. He always loved the WSU offense and preferred the smaller atmosphere over big-city, and while he actually got offers from Miami, Nebraska, Colorado and west-coast schools like Cal, Arizona and OSU, the Cougs nabbed him! One quote said that if the ball is in the air, he truly believes it’s his ball and he can go up and get it over anyone. Gotta love that. Combine that with the JC kid, Rabb, who is all of 6-6, and JC WR Greg Walker who is 6-4, this is easily the tallest group of WR’s that the Cougs have landed. Can you ever remember WR’s coming here going 6-4, 6-6 and 6-4?? Pretty exciting stuff!

Then you had the WSU upset over #10 (OVERRATED) UW. Even without Low, the starting PG, they pulled it off and even better, they battled to come back in that game and made clutch shots to finish it off. Don’t look now, but the Cougs are 9-3 with two of their losses to AZ and Gonzaga and now have a ranked opponent in the W column. Bennett said it best when Low was injured: “If you can’t overcome the loss of one player – a player as good as Low – you haven’t built a program.” The fact that they won like that without him? Wow. In three years, he’s taken this program from a complete piece of crap to suddenly a team that nobody will want to play! It might be boring at times, but Bennett Ball works! I just love the fact that the best recruiter we’ve had in a long time will be taking over as HC next year, and there are many that believe Tony is going to be a great one. Just hope he sticks around, because you know after a few winning seasons, his name will be on every short list of hot coaching candidates. Who’daTHUNKIT???