Guest Blogger #6: Why the Rangers Can Win the Cup Sooner than Later

We have the coach. Since Torts has come on board as the Rangers coach, something changed. I love how Renney prepared young players and got them excited about the game. Torts does the same thing, but with more gusto and passion, which is often mistaken for temper. Torts is also able to do something that Renney just couldn’t get a handle on – getting veterans to play like they are young. Granted Jagr played like a kid for a good stretch, but that came to a halt because of injury. And as good as Jagr was, it takes more than a man to get the cup… it takes a team. Torts has built a team through his antiques, which can sometimes be compared to that of the great Herb Brooks (who couldn’t bring the Rangers a cup, but the Olympic Gold makes him a hockey god in my book). These Rangers play for Torts and they play hard. Torts is kind of like the father that pushes and pushes because he knows his kids are winners. These Rangers are hungrier than ever, and I wouldn’t be surprised if they felt like they didn’t have much time before it isn’t this group of guys again competing for Stanley – urgency may be setting in to win with THIS team, not just this uniform.

We have the talent. Gaborik has the potential for greatness, which has been realized in spurts. Consistency could finally set in with the addition of Richards. Wolski is a perfect fit for the top line, especially when one considers his potential and recent work ethic and training with the proven Barbara Underhill. We have seen the talent of our younger players. Stepan is an especially exciting player that has my eyes wide every time he steps on the ice. The great thing about having so much talented youth is that they feed off of each other, they fuel each other, and they improve each other. I should mention how much I love the Lunqvist/Biron tandem here, but there is too much good to write about in just this article, so I’ll just say that they are good for each other and great for the Rangers.

We have the drive. Torts wants another cup, he wants to sip from it again. Gaborik wants to prove he is a winner, not just a talent. Dubinsky and Callahan, among others, want to win young and win often. This team is hungry and it is time to feed. The hunger grows and is obvious in the past two seasons. Dubinsky drops gloves because his passion boils over. Callahan skates as if he has the heart of Prefontaine. Staal wants to have Thanksgiving dinner with his family and his show off his friend Stanley. The drive is seen in every Ranger individual, and the law of synergy has me excited for this season.

We have the supporting cast. No other team in the NHL might be able to have players from the minors fit so flawlessly with the big team. The Rangers and Hartford have been able to play a system that works, while allowing players to grow in the basement and perform on the main floor. With most other NHL teams, it seems as if players get called up only to play on a line designed to kill time, or they are thrust into a line which swallows them up, even if only for a few games. Not so with the Rangers. Our cast and our understudies know every line of the play and can all deliver with ease.

We have the ability to win on the road. Our road record is good. Even away from the Garden, our fans are everywhere, in every city, wearing our uniform. The Rangers play for all of the fans, the ones in New York, and the ones abroad. I just moved to Chicago last year, and you better believe my Ranger Jersey is worn even more frequently, if only to prove a point. I am counting the days until March 9th.

We can have the cup. It is time to start believing again.

Just a reminder that I will be accepting guest blog entries until July 31st. Please e-mail them to [email protected]. The winner will receive a home blue Derek Stepan jersey. 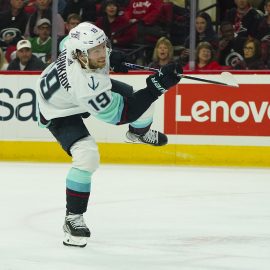 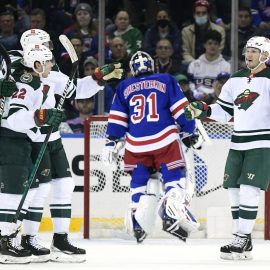 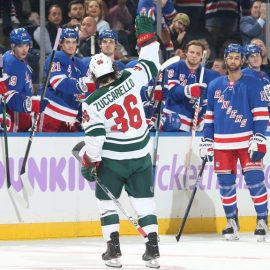 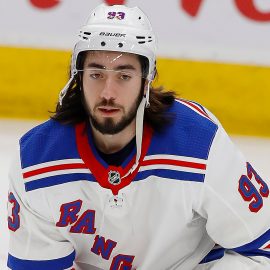