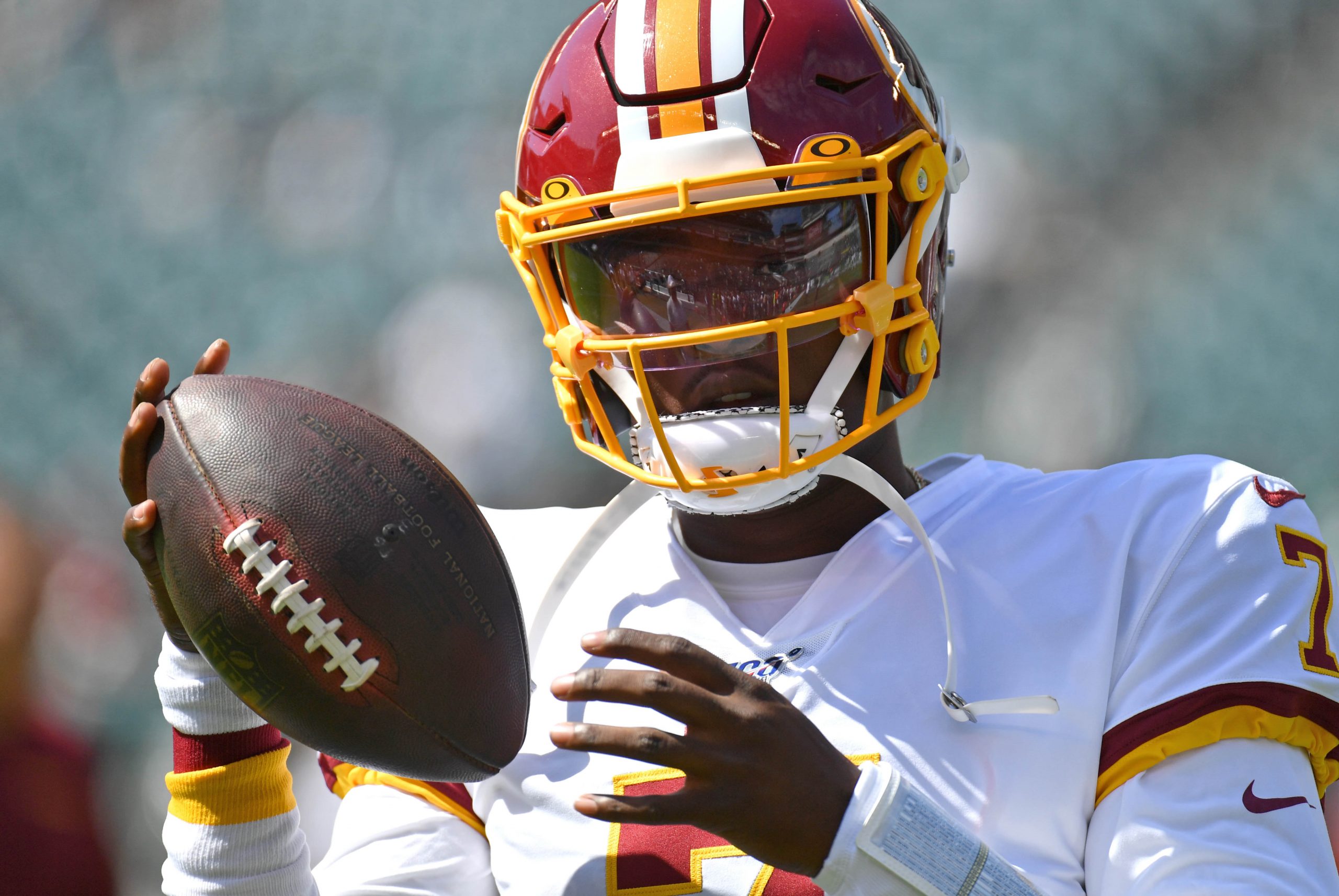 On Wednesday, former first round pick and face of the Washington Football Team franchise, quarterback Dwayne Haskins, went from starter to third stringer.

The benching has raised many questions, especially in a division as weak as the NFC East, where even Washington, at just a single win, is currently tied for first place after four weeks.

Why now?  Why demote so badly from first to third string?  Is it a racial issue, which has been brought up on social media since news of the benching was announced?

The answer might have more to do with Haskins’ play than with his skin color.

The simple fact is this that although Haskins’ numbers aren’t too bad, his overall play hasn’t been very good.  Now granted, Washington has lost three straight games this year to some tough teams, but overall, Haskins’ play is what finally triggered the benching.

In four games this season, Haskins has struggled to get the offense moving.  Understandably, the Washington offense isn’t Dallas or Kansas City, but they aren’t the Giants or Jets either, and yet they have struggled mightily.

And while Sam Darnold and Daniel Jones haven’t been great this season either, both have shown flashes of why they went ahead of Haskins in the draft.  Also, in their cases, both quarterbacks are on teams missing starters at wide receiver and/or running back, whereas Washington for the most part, is pretty healthy.

Stats can be deceiving, and while the numbers Haskins has put up look decent, the fact is that he has struggled since being drafted by Washington.

During his rookie year last season, Haskins appeared in nine total games, and posted a QB rating under 80, six times, and finished with an overall passer rating of 76.1.  And the thing is, that type of play has carried over into the first four games of this season, although his stats appear better, his play overall has been about the same.  He sports a 3-8 record as a starter, and his completion percentage, yards per attempt, and QB passer rating rank towards the bottom of the league.

Washington’s offense has looked stagnant, and there hasn’t been much growth from year one to year two, so a benching at this time, especially after reports came out earlier last week that Head Coach Ron Rivera had a meeting with Haskins about playing better, isn’t exactly shocking.  What is shocking, is that Haskins got dropped from QB1 to QB3- now that’s newsworthy right there, and a bit of a head scratcher.

And the timing of this move too, that’s a whole debate right there, enough to fill any morning radio talk show.  If the Washington franchise had their doubts about Haskins with a new regime in charge, then they should have had every opportunity to pull a Kliff Kingsbury (Arizona Cardinals) and just start the franchise over again, even a year after selecting Haskins in the first round, I mean after all, the 2020 offseason offered the likes of Cam Newton and Andy Dalton in free agency.

Washington chose neither, and now, they’ve gone with Kyle Allen to start in place of Haskins, with Alex Smith moving to the role of second string backup.

Now I’ve been around football a long time, and as a die-hard 49ers fan, I’ve seen the growing pains that a rookie quarterback endures, because the fan-base endures it with him.  Alex Smith had a rough 2005 rookie campaign, but showed promise towards the end. His second season was better, not just from a statistical standpoint, but also from a team standpoint, as the 49ers won seven games, including a road win over the Seattle Seahawks and then knocking out Denver from the playoffs in the final week.

You saw the growth there in Alex Smith, and I believe the fear in Washington might be, that after just 13 games, they feel that either Haskins wasn’t ready to start yet….or Haskins isn’t the guy.

We’ll find out the answers soon enough, but for now, Haskins is riding the bench.  It’s a curious decision, but an understandable one at the same time, if that makes any sense.