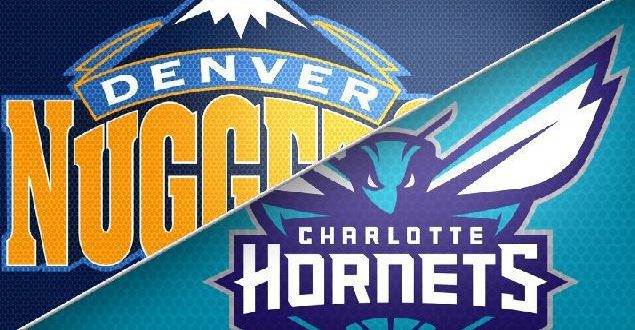 Watching the Hornets game last night, one thing just kept echoing through my head.  Earlier in the day I had seen a Sports Illustrated article where the Nuggets were ranked 13 and the Hornets were rated 17.  Granted, that’s not a big gap between the 2 teams and it was done after Nic Batum’s injury, but it still had me wondering (as I always do), what makes them better than us.  Well, as the final buzzer sounded, and the game ended with our Hornets beating the Nuggets, 110-93, it just helped me put even less faith in anything I ever see when it comes to ranking my team.  I mean it wasn’t like the game was close, or that is was neck-in-neck the entire night.  It was a game where the Hornets were just draining every shot they put up.  From the starters to the bench, the Hornets played their style of game, looked like they were having a blast, and they came away victorious.  Keep in mind that this was Michael Kidd-Gilchrist’s first game of the season, so he was very limited in minutes and has lots of rust, and Nic Batum will still be out for many more weeks.  Am I reading too far into this win?  Maybe I am.  Do I believe our Hornets are much better than everyone is giving us credit for?  Absolutely!

So how did the Hornets strike gold against the Nuggets?  So many factors were involved.  3 starters in double figures, Frank and Malik in double figures were major factors.  49 total rebounds, 5 total blocks, 5 total steals, 18 assists for the team.  I’m telling you guys, this is a road map for success.  Good defense, taking care of the basketball (though there were 14 turnovers), and playing relaxed, having fun and playing as a team is what it takes to win games and the Hornets did all of that.  Top scorer on the night was Frank Kaminsky with 20 points, 4 rebounds, 3 assists, and a block for the night.  This is 3 games in a row where Frank the Tank is showing us what he is truly capable of.  As was mentioned by Pete Guelli on Twitter last night, if everyone remembers after the All-Star break last season, Frank started coming to life on the court and having some good games.  I was truly disappointed after Frank’s first game of the season.  He has shut me up as a critic of his.  Proof is in the pudding, and the man has come to play for the last 3 games.  Keep it up Frank!  Make this be the norm and not the exception.  Proud of you man!

Behind Frank was team captain, Kemba Walker who had 19 points, 4 rebounds and 5 assists.  Malik Monk had a breakout night, scoring 17 points, 2 rebounds, 2 assists, and 2 steals.   This is what I hope to be the first of many more big nights for the rookie.  He needed a game like this, and he certainly got it.  Great performance Mr. Monk!  Jeremy Lamb continued with his solid play as a starter, scoring 16 points, 2 rebounds, 5 assists, a steal, and a block.  He had a highlight pass on the night where he threaded the needle through almost the entire Nuggets team to find Marvin Williams for an easy 2 points.  Dwight Howard rounds out the double-digit scorers with 15 points, 19 rebounds, and 2 blocks.  Superman is in the building, having the most fun I’ve seen him have in years, and I could easily see him being an all-star this season with his continued solid play.  I made mention of him taking a step back from the foul line and just shooting jumpers for foul shots.  He didn’t take my suggestion, but he did hit 7-11 from the foul line.  Dell Curry promised to tell him how to correct his shot, so I’m holding him to it.  Dell, I’m watching for a change.  Dwight, the man knows what he’s talking about.

All in all, I was very proud of the Hornets last night.  They are now 2-0 at home on the season, making Spectrum Arena be their “ Home Sweet Hive”.  We are not far away from playing at this level on the road as well.  Once that happens, there won’t be any teams sleeping on us.  Just remember we’re 2-2 with basically 2 starters not available, and Cody Zeller out with a bone bruise.  I think the start of this season, with all of the injuries we have to key players, we are holding our own pretty well.  The best part is the level of experience our bench players are getting and the exposure our rookies are getting.

Dwayne Bacon, who I should have mentioned earlier, had another solid game.  He only had 4 points, 4 rebounds, 2 assists, and 1 block.  Like we all keep saying, and I plan to stop saying…probably after this article; he was a 2nd round pick.  This guy can play some basketball.  He is a rookie that is playing like a first round player.  We have a diamond in Bacon, and I like the sizzle of his game.

Hornets fans, I like where this team is at right now and I like what I am seeing.  I grin when I realize that MKG is back, Batum is healing, and Cody will be healthy soon.  If Michael Carter-Williams can get healthy and Stone gets back to healthy, the Hornets will be one of the most dangerous teams in the league this season.  We just have to keep taking one game at a time, and continue to play hard, have fun, and keep the intensity high. To sum it up in a hashtag…