Hornets Swarm Back to Ground the Hawks 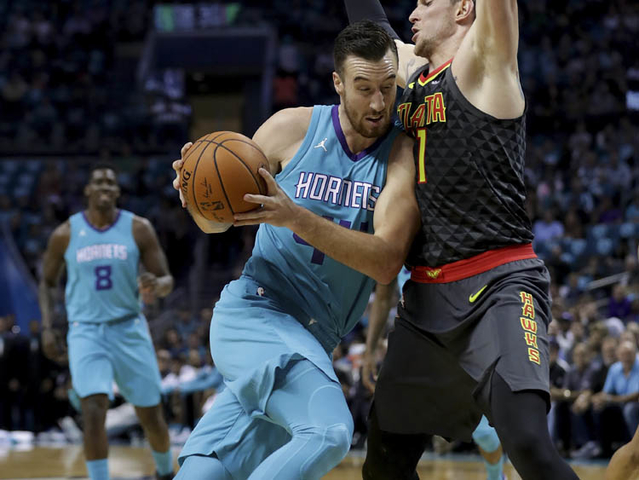 Well, the first half was an ugly, ugly mess.  Can we just not talk about it?  Well, I guess we should.  If we get healthy and we start taking better care of the ball, these comebacks from being down so many points won’t have to happen.  I mean tonight’s comeback from being down 20 points was impressive, but if we can start a game strong, we can come out victorious without wearing ourselves out.  With the injury to Nic Batum, and Cody Zeller, and MKG still out for personal reasons, the second unit is a young, inexperienced group that will struggle right now.  They will improve as the season progresses, but for now, the starters have to bring their A game.

Tonight, the starters did that for the most part.  Kemba Walker led all scorers with 26 points, 9 assists, 4 rebounds and a steal.  Dwight Howard went for another double-double, contributing 20 points, 15 rebounds and a block.  Rounding out the double-figure scorers in the starting 5, Jeremy Lamb had another good showing, scoring 15 points, 5 rebounds, 2 assists, and a block.  Since Cody Zeller was out with a bone bruise to his knee, Frank Kaminsky led the second unit in scoring with 21 points, 6 rebounds, 3 assists, and a steal.  It was quite a bounce back game from the first game of the season from Frank.  Hopefully he can keep it up because tonight’s rough-looking starter was Marvin Williams, who was 0 – 6 from the floor with 3 rebounds, 1 assist, 1 steal, and 1 block.  We must have all of our starters scoring, or it will make things difficult for the second unit.

Dwayne Bacon had another impressive start on the night.  While he didn’t play all that well in the first half, in the second half, he started getting into the groove, scoring 6 points, 11 rebounds, and a steal for the game.  So glad to see this young man putting up such good numbers, this early in the season.  Our other rookie, Malik Monk, is still forcing things a bit much and is playing a little too forced again.  He had 6 points and 3 rebounds on the night.  These guys are going to have many more opportunities to grow as NBA players, and it will be fun to watch.

Dwight Howard put it best tonight when he was talking to Stephanie Ready.  When they are out on the court just balling and having fun, the offense and defense both flow and there aren’t any teams in the NBA that could beat us.

Dwight, I wholeheartedly agree.  I was so excited to see how the Hornets closed the gap and won this game by 18.  Then I got even more excited when I started thinking about the fact that we did it without Batum and MKG.  That’s right, we aren’t even at 100% right now.  This season is going to be so much fun!

Stay tuned for Monday’s game.  We’ll be hunting in Milwaukee in hopes of bagging those Bucks!