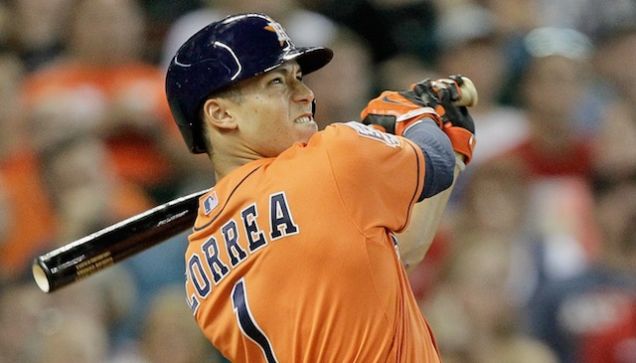 The Houston Astros are alive in the 2020 Major League Baseball Playoffs. In game five of the American League Championship Series on Thursday, Astros shortstop Carlos Correa of Ponce, Puerto Rico hit a dramatic game-winning ninth inning home run to give the Astros a 4-3 win over the Tampa Bay Rays from Petco Park in San Diego, CA. The win helped the Astros stay alive in the series, but they still trail the Rays three games to two.

Correa was one of two Astros players to hit a home run on Thursday. Fascinatingly, the other home run came from leadoff hitter George Springer of New Britain, CT, who hit a first inning home run as the Astros very first batter in the ball game. In fact, according to David Barron of The Houston Chronicle, it was the first time in Major League Baseball postseason history, that a team hit a home run off their first pitch of the game, and their last pitch. Technically, Springer was not the first batter of the game. He was only the Astros’ first batter as the Rays had three batters in the top of the first inning.

Meanwhile, in the National League Championship Series, the Atlanta Braves took a 3-1 lead over the Los Angeles Dodgers in Texas with a 10-2 win. The Braves were led offensively by designated hitter Marcell Ozuna of Santo Domingo, Dominican Republic. Ozuna had two home runs, two singles, three runs scored and four runs batted in. Meanwhile on the mound, rookie starting pitcher Bryse Wilson of Durham, NC was brilliant as he had a quality start and only gave up one run in six innings.