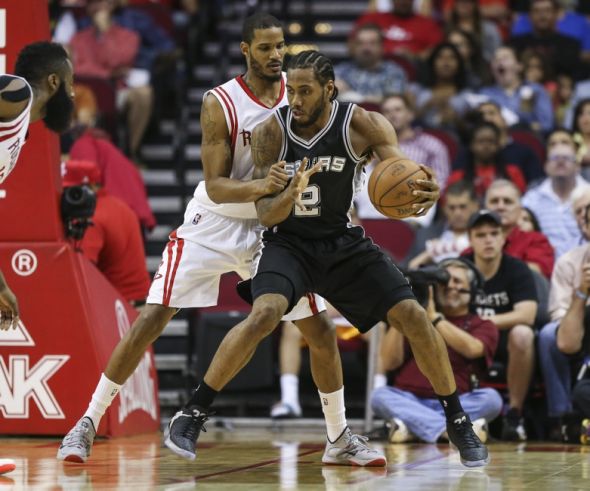 On Tuesday night, the San Antonio Spurs traveled to Houston to face a Rockets team that had won its last ten contests behind the strong play of James Harden and a barrage of 3-point shooting. After the first 43 minutes, San Antonio had more turnovers (18) than assists (15), and trailed 96-83. Luckily for Gregg Popovich’s squad, NBA games last for 48 minutes.

In the final 4:30 the Spurs outscored Houston 19-4, earning a thrilling 102-100 victory in a game they had no business winning. They squeezed a complete winning effort into the final 9% of the game, and did something that has only happened one other time in the past three years.

It wasn’t as if San Antonio shot lights out and played flawlessly down the stretch either. The Spurs won because they took care of the ball and moved it well on offense while forcing turnovers on the other end of the floor. Here’s a full breakdown of what happened in those decisive final minutes.

With 4:30 left, Tony Parker ran a pick and pop with LaMarcus Aldridge on the left wing, giving him an open mid-range jumper which he missed. Aldridge boxed out his man and got the offensive rebound, immediately passing it out to Parker who made the wide open corner 3.

Harden ran a pick and roll with Nene on the other end, and Pau Gasol stepped up well to defend the mid-range shot and force a miss. When the shot came off the rim and landed in Kawhi Leonard’s left klaw, both Nene and Harden got caught watching the ball while Gasol ran the floor behind them (bottom right). Kawhi hit Pau right in stride on the post route, and the big man slammed it home to cut the deficit to 8. On the next Rockets possession, Leonard intercepted an inside-out pass from Nene and took the ball coast to coast. He attacked Harden at the rim drawing a foul, but the 92% free throw shooter inexplicably missed both.

Houston is known for shooting a high volume of three pointers, but they shot a woeful 15% from beyond the arc on 38 attempts in this contest. After Leonard’s misses at the line, Trevor Ariza missed a wide open three from the right wing, and the rebound got tapped out to Eric Gordon who also missed a three. Sean Elliot correctly noted that it was a mistake for Gordon to take that shot so soon after the shot clock reset with an 8 point lead and 3 minutes to go.

On other end, Leonard posted up the smaller Gordon and drew a double team, which forced Patrick Beverley to help off of Ginobili and cover Gasol in the paint. Kawhi dribbled from the right block to the middle of the lane, drawing the attention of all four defenders on the court and Harden. Like a quarterback, Leonard stared down Parker in the corner to get Ariza to move into that passing lane, and then threw a no look dime to Manu for three.

Harden took it up and drove to the lane, only to have the 39 year old Ginobili jab at the ball with perfect timing and precision to steal it. With Harden pleading his case to the official under the basket, Manu found the guy he should have been making an effort to guard who dribbled into an open 3 pointer and cut the Rockets lead to just two.

Mike D’Antoni called a timeout and got the Rockets calmed down. Harden hit a layup, and on the next possession Gordon blocked a shot by Ginobili leading to a transition layup by Ariza. Ariza then picked Leonard’s pocket, and Houston looked like they were in good shape with a 6 point lead and the ball with less than two minutes to play.

Harden ran the clock down with Aldridge guarding him, but instead of trying to drive past the big man near the end of the shot clock, he jacked up a contested three that missed everything for a 24 second violation. Kawhi brought the ball up and drew a shooting foul on Ariza, and this time he hit both shots to cut the deficit to four.

On the next play, Ariza set a high screen for Harden, received the pass at the top of the arc and drove to the lane. Ariza didn’t dive straight to the basket, and that gave Ginobili time to do one of his favorite things. The old man rotated over, planted his feet and drew the charge, both preventing a dunk and giving his team a new possession.

Just a few seconds after sacrificing his body on defense, Ginobili assisted on a Tar Heel Triple that made it a one possession game. Aldridge set a pin-down screen to free Danny Green for the catch and shoot look.

Harden took the ball up the court with Leonard guarding him. He used a screen to lose him for a second, but then Kawhi took him to Klaw School and poked the ball away. He took it to the rim in transition and was probably fouled on the miss, but no call was made. Ariza got the rebound and immediately passed to Harden, but Green jumped out from behind the intended receiver to pick the pass off.

Pop called a timeout with 29 seconds left, and drew up a play for Leonard. Kawhi got the smaller Gordon switched onto him and drove into the paint, but the entire defense collapsed and forced him to pick up his dribble. Self-proclaimed “best defender in the league” Beverley left Mills wide open in the corner, and nobody got back on him. When Kawhi passed it out to Manu who drove on the left side of the lane, Beverley was the only defender on the weak side that could step up and prevent a layup. Manu drove right at him and passed to Mills while impeding Beverley, ensuring that the game winning 3 would be wide open. Again, Harden’s defense on this play was questionable at best.

Here's your game winner from none other than Patty Millshttps://t.co/8b9kDOi5yI

Trailing by two, Houston’s Sixth Man of the Year Candidate Gordon missed a three, and Manu grabbed the board and was fouled. He could have extended the lead to four with 3 seconds left, but the 89% free throw shooter missed both and gave the Rockets a chance to tie or win the game with an after timeout inbounds play on their end of the floor.

Pop put Jonathon Simmons in as a defensive substitution, and that proved to be important. Kawhi started on Harden, but a series of screens left Juice guarding one of the league’s best shooters when the ball was inbounded. The Beard hoisted up a three for the win over Simmons’ outstretched arm, but it clanged harmlessly off the rim as the buzzer sounded.

So, how did the Spurs pull this miraculous win off? Ginobili and Mills had something to do with it. The duo shot a combined 7/11 from downtown, compared to just 6/38 for the entire Rockets team. They put together their own little 9-0 run early in the fourth, and came up clutch late.

Leonard had an off game, shooting just 5/14 from the floor and turning the ball over 7 times. He still had a positive impact on the game though, especially down the stretch. Two of his five steals came in the final five minutes, and he repeatedly collapsed the entire Houston defense creating openings for his teammates. In this frame, all four Rockets defenders and Harden are looking at Leonard. Kawhi is looking at Parker, and throwing a pass directly into Ginobili’s shooting pocket. Coach Popovich said after the game that he was happy with his team’s sticktoitiveness. They could have very easily given up, but they put the clamps down on defense and executed, clawing back into the game one possession at a time.

About 91% of this game was very ugly for the Spurs, and they’ll probably hear it from Pop about that. But this San Antonio team is scrappy, resilient, and finds a way to win these tough games. Tuesday night, they did it against all odds in the arena of an excellent basketball team.