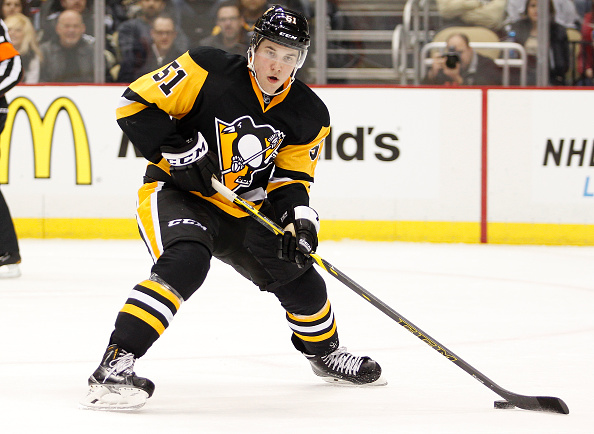 If you listen to “Pat and Leah Have a Hockey Podcast” you know on the most recent episode we spent some time looking at defensive trade options for the Penguins to sure up their blue line after their defensive debacle against the Washington Capitals. On the show we mentioned two players, both of the Colorado Avalanche, Eric Gelinas and Patrick Wiercioch. But today I’d like to take a look at not just them but a handful of different players the Penguins could target if they want depth on the backend. First let’s take a look at Gelinas. For one and a half million dollars The Penguins could have the moderately young defender. For Gelinas the Penguins could easily package Derrick Pouliot and a player like Kunitz whose deal also expires at the end of the year. Pouliot, who is an RFA would come with rights the Avalanche could use and the change of scenery is likely to be just what the young Pouliot could use. On the other hand there is Wiericoch who doesn’t have as much of an offensive upside, but comes at half the price and could easily be a one-for-one swap in exchange for Pouliot. Both deals expire this year and both are RFAs. This would be a good example of a hockey trade that could easily benefit both parties. Now this is where it gets really interesting. If I could pick just about any player for the Penguins to add it would be Cody Franson. The rear-guards expiring deal with the Sabres makes him a prime movable piece for them and someone the Penguins could easily target to add to their mix. He has some of the best shots against numbers of the names on this list making him the kind of piece that would be a worthwhile add. And while he is a little more expensive the Sabres could make a strong trade partner for the Penguins. Think about a deal that sends Fehr and Pouliot back for Franson. It clears money this year and next as well as making a spot for Oskar Sundqvist to slide into easily next season. Fehr is the kind of player Dan Bylsma loves. Micheal Matheson is the kind of name that looked appealing to me immediately when thinking about a potential trade. The youngster is still on an entry level deal but shows promising upside. Thing is he is very unlikely to be a piece that most teams would be willing to part with. Young, cost controlled, etc. However, the Panthers have hit a tough spot so it’s definitely worth a call to see if it could happen. Perhaps the Penguins send the fifth they acquired from the Sens for Mike Condon with Pouliot or another slideable defender to get the Panthers to bite. Another option that is attractive from play perspective but perhaps not in some others is Chris Tanev. Tanev has stellar defensive numbers. They remind one a lot of Brian Dumoulin’s. He’s a shutdown guy on a pretty awful team and still coming out okay. He’d be a great add if it weren’t for his massive 4.45 AAV deal that goes until 2021 when he’ll be 30. The point of this acquisition by the Penguins is supposed to be a bit of a bandaid in case of injury while the great young talent develops in Wilkes-Barre/Scranton. Tanev just seems to cost too much for that. The one thing that could make it worth it is if the Canucks eat some salary or take enough back to make it feasible. As for long-term, Tanev doesn’t have any no movement clauses so he could be left unprotected in the expansion draft and is the kind of player a team like Vegas is likely to need to build their team. But still, it’s more of a reach than some of the other names on this list.

Overall, the Penguins have performed better of late defensively. It seems a team commitment to limiting mistakes has helped them a great deal as well as line-by-line meetings with the coach last week. Plus the call-ups of Gaunce and Ruhwedel seem to be more successful than Warsofsky and Oleksy had been in the same positions. Not to mention that Brian Dumoulin appears to be getting closer and closer every day to a return. However, if the team wants to make some sort of move one of the names here would be good targets to add more players to help shoulder the load of defensive play.