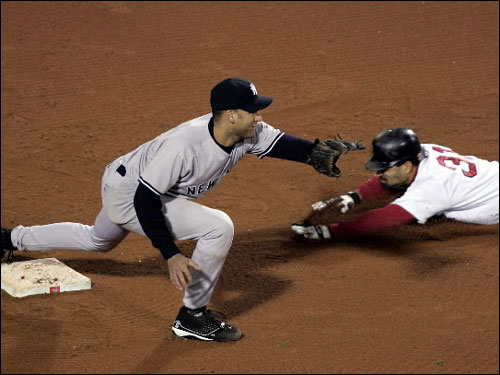 Yesterday was the one-month anniversary of Game 4 of the 2004 ALCS – Mondays’ wise. Four Mondays ago, I attended the game. I still remember the air of expectation when Dave Roberts came out to steal second base after Kevin Millar drew a walk. Everyone in the park knew he was going. Joe Torre knew it, Mariano Rivera knew it, Jorge Posada knew it, and I bet you George Steinbrenner knew it, too.
But Dave Roberts could not be stopped.
SAFE! (The picture to your left is a Stan Grossfeld shot from the Boston Globe.)
Dave Roberts is safe at second. Bill Mueller rifles a shot past Rivera into centerfield, Roberts rounds third …
SAFE!
We have a tie ballgame!
And just like that, the momentum shifted, and, well … the rest is history. Literally!
When people point to the Red Sox’s World Series season, they are going to point to Dave Robert’s steal – rightly as he should. But two other very important aspects of the game completely changed the complexion of the game. And no, one of them is not David Ortiz’s game-winning shot. You knew it, didn’t you? As soon as Roberts crossed the plate to tie the game, you just knew that it was a waiting game until David Ortiz could get up and send us all home.

So what other two things were important to this victory, that cannot be denied?
One of them is Tim Wakefield, and the other includes Derek Lowe. Tim Wakefield, the longest-tenured Red Sox. Tim Wakefield, starter, reliever, mop-up reliever, set-up man, closer, reliever, long-man, starter. Over the course of his career, Tim has gone where the Red Sox have wanted him to go (sometimes unwillingly, though). He straps his cleats on, picks up his glove, and says “at your service.”
Well, he certainly was at the Red Sox’s service in Game Three. This is a guy who sees his team get blown out. The winner of the game is pretty much sewn up. So now Tim Wakefield is starting Game 4, and is the guy in which everything is riding on. He could be the one to save it all. He could throw a perfect game, and the Red Sox could roll through Game 4 and get to a Game 5.
But he knew one thing – he’d have no bullpen behind him in Game 4, because the bullpen was going through a meat cleaver in Game 3. So what did Tim Wakefield do? He got up and volunteered for duty. And he got pressed into duty to save that bullpen. Bronson Arroyo lasted 2 innings, Mendoza 1, Leskanic 1/3, Wakefield 3 1/3, Embree 1/3, Myers 2.
It wasn’t a pretty outing for Wakefield. Oh no, far from it. 3 1/3 IP, 5 H, 5 R, 5 ER, 2 BB, 1 K, 64 pitches, 43 strikes, and an ERA of 14.54.
But he saved the bullpen. And not only did he save the bullpen, he handed Derek Lowe a start. And as we all know, Lowe eventually clinched Game 7 against the Yankees and Game 4 against the Cardinals in the World Series, not to mention clinching Game 3 against the Angels in the ALDS, coming on in relief. No Wakefield … no Lowe. It’s that simple.
Derek Lowe 5 1/3 IP, Timlin 1 IP, Foulke 2 2/3 IP, Embree 1 2/3 IP, Myers 0 IP (walked the guy they wanted him to get out), Leskanic 1 1/3 IP. No Wakefield, no Leskanic nor Embree. Possibly even no Timlin. So that’s how Wakefield saved the series. So we have Roberts and Wakefield to thank.
Which brings me to the third “thank-you,” and it’s not Derek Lowe. I said it included Lowe. How does it include Lowe? Picture this. We’re waiting for the game to start. I see Derek Lowe jump out of the dugout, walking to the bullpen to loosen up. He’s kind of walking a little quick, head down, wanting to get to the bullpen. It’d been a rough year for him, wouldn’t you agree? But what do the fans do? We stand up and not only do we give him an ovation, we give him a rousing ovation.
You could tell – his shoulders perked up a bit, he started walking straighter, with more purpose. He doffed his hat a number of times, to cheers. This was not 14-12, 5.42 ERA, 182.2 IP Derek Lowe, by god. This was 21-8, 2.58 ERA, 219.2 IP Derek Lowe!
Well, we all know what happened after that.
But it’s not just Dave Roberts, Tim Wakefield, and Derek Lowe we need to thank. It is: