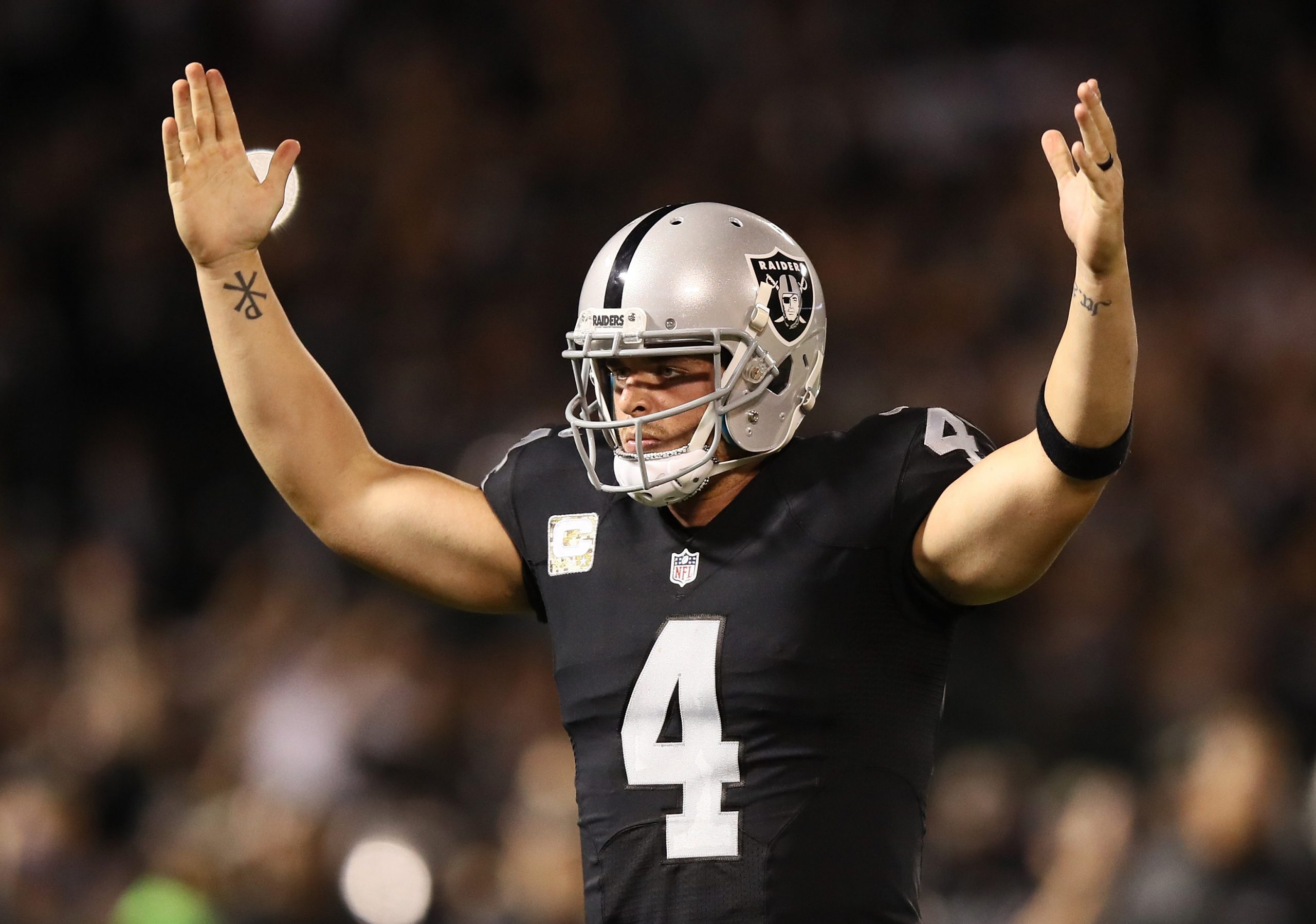 In a recent conference call with Raiders season ticket holders, coach Jack Del Rio dropped the nugget that the team anticipates having Derek Carr operate the no-huddle offense more frequently under new Offensive Coordinator Todd Downing. This comes after Del Rio and Downing have both previously talked about giving Carr more authority to change the play call at the line. Some of Carr’s best plays in 2016 came from either the no-huddle or changing the play at the line before the snap to take advantage of a mis-match that favored the Raiders.

Expectations are high for Carr coming into his fourth season and rightfully so. Drafted high in the second round in 2014, there were many who doubted his ability to fit into the NFL right away due to his background in college as a spread offense quarterback. However, Carr has shown from the start that he has the tools – both mentally and physically – to be a franchise quarterback.

In large part because of Carr’s development in from 2015 to 2016, the Raiders made the playoffs for the first time in almost 15 years but the situation was sour for Raider fans because Carr broke his leg versus the Colts and as he limped around the house recovering from surgery, the rest of the team limped into the playoffs before losing handily to the average Houston Texans.

The change to increased no-huddle, if actually made, is a positive development. The league has been trending in this direction for quite some time and many of the best teams use it as a strategic weapon – something to tire the defense and help the offense get into rhythm by making some plays quickly.

In 2016, Carr was known for his ability to bring the team back from being down and the Raiders won a number of close games due to his ability to run tight, effective no-huddle offenses late in the games. The Raiders also were among the best in the league at scoring right before halftime in 2016.

The team has discussed using the no-huddle offense more judiciously before but perhaps Downing will be better at following up on the commitment than was previous Coordinator Bill Musgrave. Additionally, there are recent examples of Del Rio wanting the offense to go in a direction that hasn’t occurred the way he liked: like under utilizing the run game later in games.

While Del Rio may want the increased of the no-huddle and while Downing may be more inclined to deliver than was Musgrave, talking about it as a goal in May is different than actually making it a priority in September. Put this one solidly in the “good idea but I want to see it happen before I get too excited about it” category.

Shilique Calhoun, the second year DE/LB out of Michigan State, told Raiders.com that he put on 20 pounds this offseason, moving from approximately 250 lbs to 270. Calhoun explained, “The reason for gaining weight was to be able to man the edge with a certain sense of strength, as well as agility. I still have my agility at this weight, and I have a lot more strength.”

Last year, the Raiders played Calhoun mostly at LB, allowing him to rush the passer but also having him drop into coverage at times. Calhoun was a very productive pass rusher at Michigan State but he struggled in his role last year at the 250 weight. He was unable to hold the edge versus the run and he also struggled when asked to drop into coverage, not something he did commonly in college.

A move to 270 means the Raiders should probably stop listing him as a linebacker and put him down as a Defensive End, a move I expect they make official at some point early in training camp. At 6’4″, 270 lbs, Calhoun should now have the additional weight to be able to anchor the edge better against the run and hopefully will not lose the burst that made him a feared pass rusher in college.

I like the move and I think it will afford Calhoun more playing time. The Raiders would love to have another pass rusher step in and give them more opportunities to rotate. With Mario Edwards able to rotate in and provide a push in the middle of the line, Calhoun can take additional snaps outside opposite Mack and/or Irvin without losing as much production at that position.

Del Rio has been very vocal since the draft that he is not thrilled with the options at middle linebacker.

“I don’t know that we’ve adequately addressed our middle linebacker position, to be honest,” Del Rio told NFL Network in early May. “I think we have some work to do there. The rest of our roster is pretty well situated, but we’ll be looking for a linebacker and we’ll continue to look, whether it’s the waiver wire, trades or available guys out there, veterans on the street. We’ll continue to look.”

Perry Riley, a pleasant surprise as a free agent who was signed in the early part of the season (October 4th, 2016) and earned playing time in the middle right away, is still unsigned. The Raiders and he could not come to an agreement on appropriate compensation but the fact that he remains unsigned by any other team means that they he’s still a viable option.

Riley still seems to be the best option for the Raiders but rookie Marquel Lee (5th round, Wake Forrest) also has a good shot at the starting job. Lee started the OTAs on the second team but Del Rio rarely starts rookies right away: he wants new players to earn their spots.

We’ll continue to keep an eye on the Mike position as it does appear to be the weakest on the team at the time.