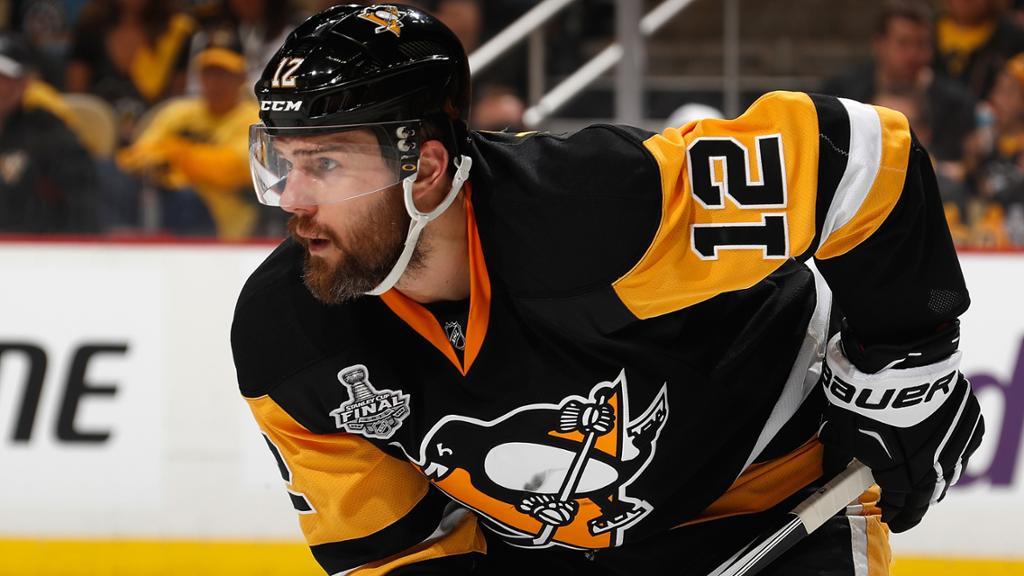 We were given a gift from the heavens last Friday.

On CapFriendly’s list of right wings who signed extensions as restricted free agents, Wilson’s new contract slots him in between Reilly Smith ($5-million) and Nino Niederreiter ($5.25-million), two players who had pedigrees of multiple 20-goal seasons before signing. Wilson has done nothing of the sort to earn that kind of contract.

It is stunning yet again how even Cup-winning NHL GMs will overpay for “grit”, “intimidation” or a small sample size of uncharacteristic productivity in the playoffs.

As for Pittsburgh’s own lightning rod of contract controversy, what is a reasonable way to compare Jack Johnson to other NHL defensemen? A few weeks ago, in Part 1 of Inside the money, we estimated that the Penguins paid Johnson three times his actual value. This conclusion was based on a weighted calculation of his goals above replacement (GAR) from the past three seasons relative to the cost of 1 GAR in free agency.

a) Comparable to Jack Johnson in usage and productivity

c) How they performed in the subsequent season

Two defensemen who met the above criteria, Dan Girardi and Ben Lovejoy, also appear in the tables below.

Defensemen 31 years or older (i.e. the same age Johnson was when he signed with Pittsburgh) who inked a contract on or after July 1st in both 2016 and 2017. 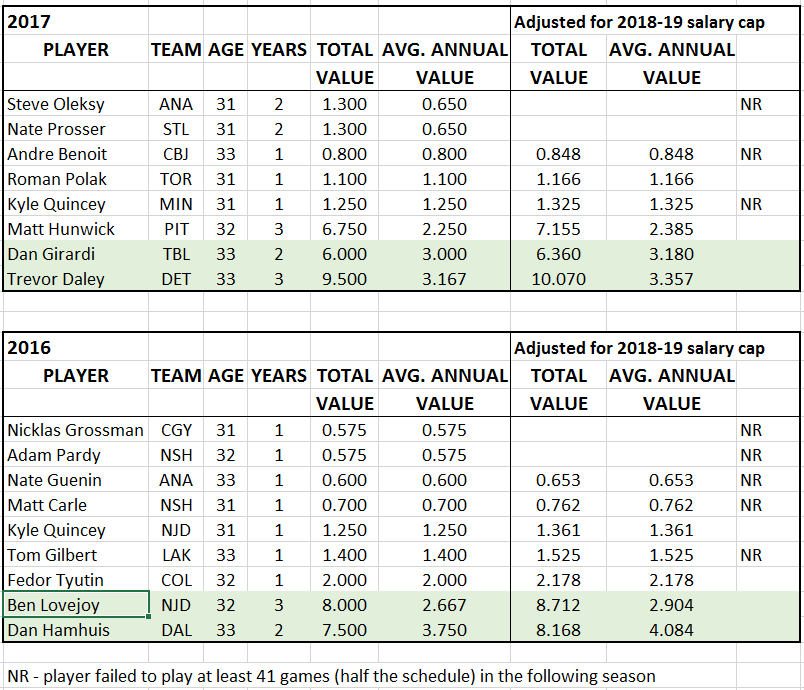 The tables show the actual total and average annual value (AAV) of each contract as well as adjusted figures based on the annual salary ceiling percentage increase. For example, Dan Hamhuis signed for two years at an actual AAV of $3.75-million in 2016. Since the salary ceiling rose a total of 9% in the last two seasons, that AAV would be just over $4-million in 2018. No adjusted figures are shown for players who signed minimum wage deals.

We note four players who signed deals of similar AAV to Johnson. The aforementioned Girardi and Lovejoy plus Hamhuis and Trevor Daley. Yet none of them secured a five-year term.

Girardi’s deal, like Johnson’s, bound him to a contending organization and was likewise criticized immediately. New York had just bought out the last half of Girardi’s 6-year x $5.5-million contract but Tampa Bay inexplicably jumped to sign him for two years at a $3-million AAV.

As for Lovejoy and Daley, we once again see that nobody tops the hypnotizing cachet of a Stanley Cup champion at the negotiating table. How else do you explain laying out that type of money to mid-level blueliners for three years?

how they performed in subsequent season

For players who played at least half the subsequent regular season, here is how these defensemen fared in terms of GAR per 82 games. 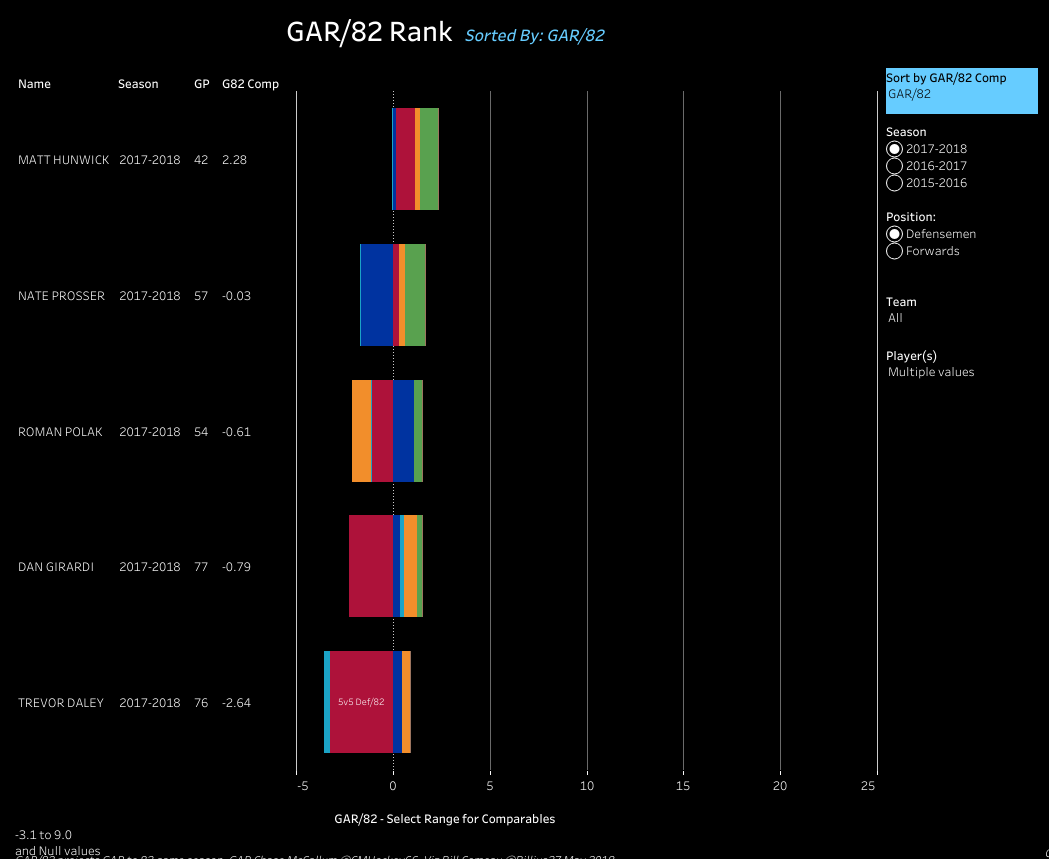 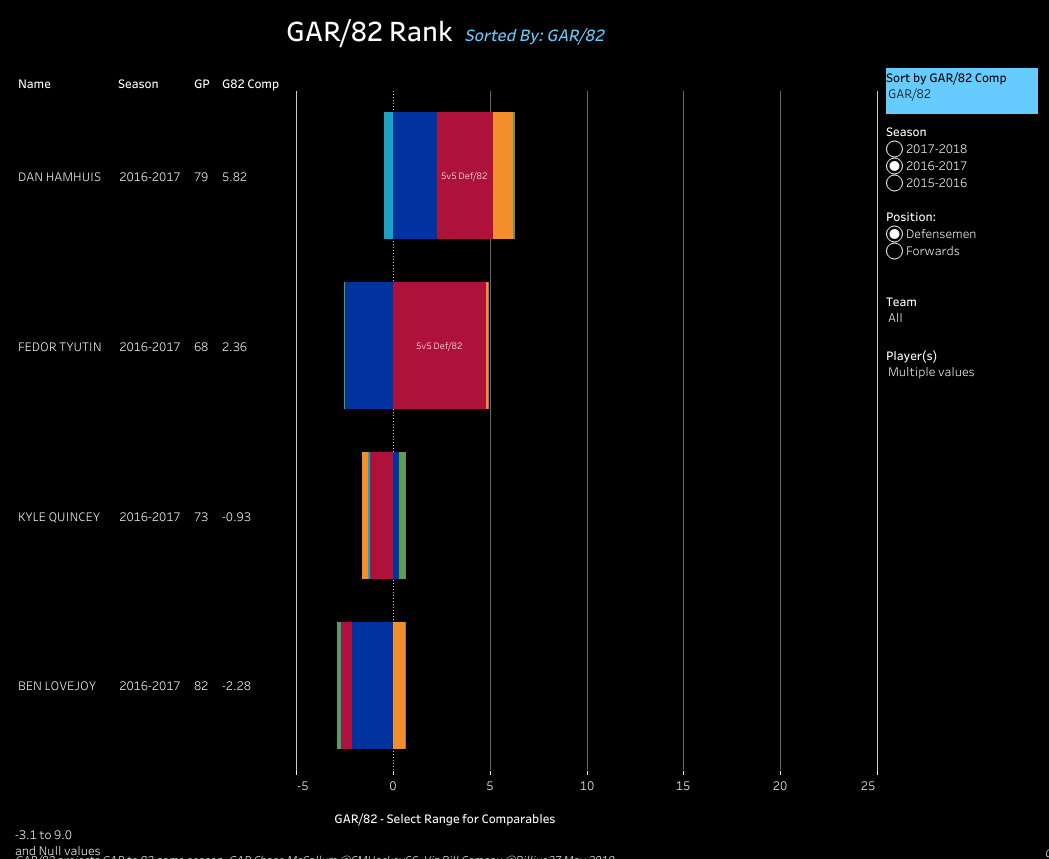 Based on a price of approximately $650,000 to purchase 1 GAR in free agency, only Hamhuis lived up to his contract in the first season. In fact, of these nine defensemen, only Hamhuis, Fedor Tyutin and Matt Hunwick provided positive value (and we all know how the Hunwick experience ended in Pittsburgh.) Will Jack Johnson join them in 2018-19? Or will he provide costly sub-replacement level production for his new team like Girardi, Lovejoy and Daley?

These trends don’t bode well for Pittsburgh but we’ll find out soon enough when training camp starts in terms of how the Penguins deploy him and how he adapts to the Penguins’ system. Opening night is only 62 days away.

The Nashville Predators have signed defenceman Dan Hamhuis to a two-year, $2.5 million contract with an AVV of $1.25 million.

Because that is what Nashville needed, more solid veteran defencemen at a reasonable price. pic.twitter.com/6prqvJBmRn