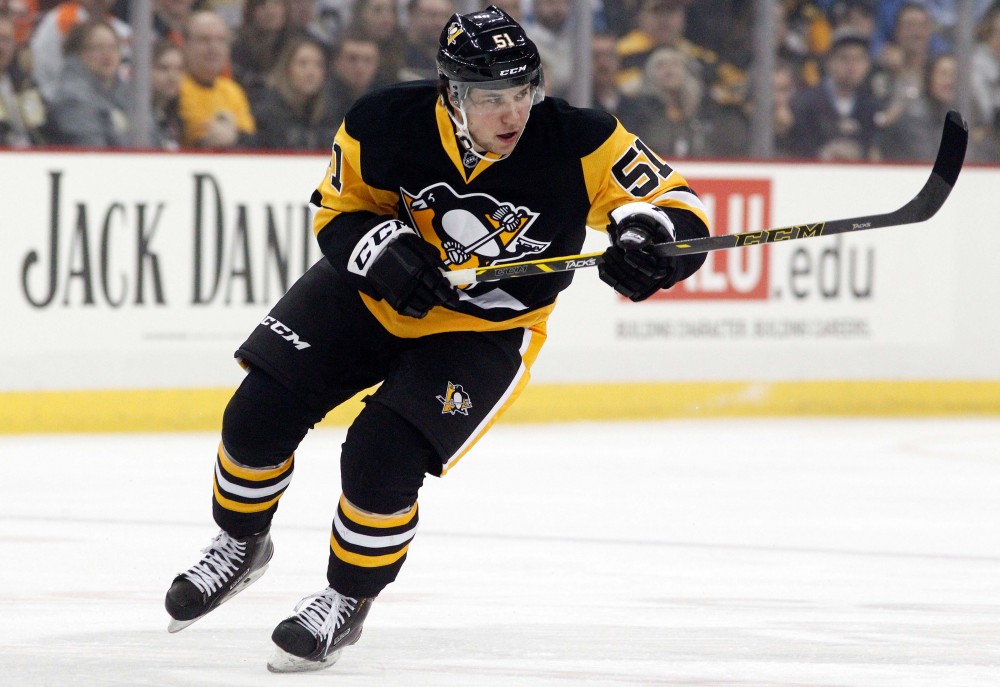 There is no more talked about Penguins prospect than Derrick Pouliot. Taken 8th overall in the 2012 entry draft in Pittsburgh he’s the team’s highest pick since Jordan Staal (who, coincidentally was traded for the team to get the 8th pick). He was highly touted from the word go. His 11-48-59 stat line as a defender in 72 games with the Portland Winterhawks turned heads in his draft year. He seemed destined to be the team’s second offensive defenseman behind Kris Letang for years to come. The something happened. Something that we still dont really know what it was.

It all seems to circle around 2014-2015. That year, his junior coach joined him with the Penguins when Mike Johnston became the team’s bench boss. Pouliot, as rookie defenders often do split time between the Pittsburgh Penguins and their AHL affiliate in Wilkes-Barre. He played 34 games with the big club in the regular season tallying a 2-5-7 stat line. He wasn’t perfect but sometimes defensemen take longer so there was no cause for concern. Even Letang took time. Except, that’s when things started to go south for the youngster. In the next two years, he played fewer games in the NHL each year. He went from 34 GP to 22 GP to 11 GP in 2016-2017. And in 2016-2016, he saw Chad Ruhwedel playing in the NHL more than him.

There were many theories as to why this happened. Why Pouliot was seemingly “being hidden”. Including the frequent, “the team is hiding him from Vegas who may want to pluck him in the expansion draft.” Except that if Vegas took Pouliot, that would have left the Penguins with their enviable goalie tandem of Fleury and Murray intact (expensive, yes, but probably the best in the league). There was also the, “the organization is misusing him and mishandling him,” one as well… except he worked with two GMs and three coaching staffs all of whom gave him a shot.

The real reason, however, seems to be pretty simple. He just isn’t all that good.

Look, I’m not saying the kid is bad because clearly he isn’t (those who go on to play even 67 NHL games aren’t bad) but there’s a chance that it just isn’t going to happen for him. Let’s look at some numbers that might illustrate more of what I mean…

Player A
Takes around 4.5 shots per 60 minutes of ice time, has an individual Corsi-for percentage of 9.87. He has 12 giveaways and nine takeaways with 26 blocked shots in

Player B
Takes four shots per 60 minutes of ice time, has an individual Corsi-for percentage of 7.33. He has six giveaways, three takeaways, and eight blocked shots.

Player C
Takes nearly six shots per 60 minutes of ice time, has an individual Corsi-for percentage of 11.06. He has 37 giveaways, 22 takeaways, and 116 blocked shots.

So, who are these players? Player B is Derrick Pouliot. Player C is Justin Schultz, the player Pouliot was supposed to be. Player A? That’s Chad Ruhwedel who the team turned to when injuries piled up instead of Pouliot. Overall, the numbers of Ruhwedel and Pouliot aren’t much different but we will get to that in a moment.

Another player we can bring into this conversation that got eaten alive for sub-optimal play last season is Olli Maatta, drafted 14 spots behind Pouliot in 2012. His stat line was somewhere between that of Ruhwedel and Schultz. He took an average of four shots per game with an individual Corsi-for of 7.89 with 30 giveaways, 11 takeaways, and 102 blocked shots. Again, another guy who isn’t necessarily outperforming Pouliot by leaps and bounds on paper but is clearly more trusted than 51 by the coaching staff. So what’s wrong with Pouliot? If his underlying numbers aren’t terrible and he’s pretty average what is keeping him out of the line-up? Well, it’s hard to put a finger on just one thing. Unless you just…watch him…

watch him pass the puck to someone on the other team…

watch him lose a foot race to, no your eyes aren’t decieving you, Scott Hartnell…

and finally, watch him watch McGinn get three clean whacks in on Murray like he’s watching on TV not covering the man.

It’s the strangest thing. It’s like he just suddenly forgets, for ill-timed moments, where he is and what he is doing. Like he’s just forgotten how to play the puck, or the body, or hockey at all. And the most frustrating part? Is that oftentimes before, between, and after these moments he looks completely capable. But these moments have a nasty habit of creeping up at the worst time and putting his team in a bad situation.

The other reason the team might be better off to just, move on from this one? As much as I’m loathed to admit it there does appear to be some attitude issues. I hate that as an excuse to trade a player but when you’re going on five years post draft and still not cracking the line-up consistently? Maybe they’re not all just talk.. and while the stories of him coming to camp expecting to be handed a roster spot could just be ill-informed sniping this is not…

Derrick Pouliot, a healthy scratch tonight, just left the ice with about 4 minutes go in warmup. Everyone else still out. That ain't good.

Plenty of the Penguins young blueliners experienced the healthy scratch. Dumoulin, Maatta, Letang in his day, and who can forget the six months Ian Cole sat in the press box? But none of them acted like a petulant child in public. And look, it is a frustrating situation but the game he was healthy scratched for? Wast the game after what could easily be called his worst professional performance against the Columbus Blue Jackets last December. He knew he hadn’t had a strong game. And still he publically threw a fit.

I’m not saying guys don’t have a right to a personality or that they should all seamlessly fall in line but when your body of work looks like his does above… is it maybe time to just find him a change of scenery?