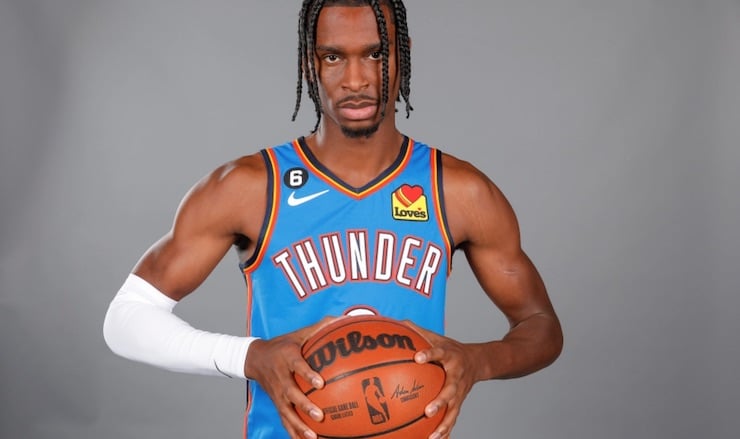 Not only is Shai Gigleous Alexander making an early case to be an NBA All-Star this season, but he’s cementing his status as one of the best up-and-coming players in the league.

On Wednesday, the Thunder guard had his best game of the year, pouring in 42 points with six rebounds and seven assists. He also hit the game-winning 3-point shot with 1.9 seconds remaining to help Oklahoma City escape with a 121-120 win.

Check out the shot below.

Gilgeous-Alexander has picked up from where he left off a year ago, when he turned into one of the league’s best scorers after the All-Star Break.

This year, the 24-year-old is averaging a healthy 32.4 points per game, good for fourth in the NBA. He’s also shot 54.6 percent from the floor and 40.0 percent from 3-point range through 14 games, representing a significant improvement from his marks from a season ago.

Currently, the Thunder hold a 7-8 record, which is far better than most people projected at this point. If Oklahoma City can hover around the .500 mark this season, the Thunder would be in contention for a play-in spot in the Western Conference.

The Thunder have won three of their last four after SGA’s a game winner against the Wizards on Wednesday night.

The Thunder started off to a 0-3 start but Gilgeous-Alexander has been instrumental in turning their season around.

He’s also taken a huge step forward in his efficiency this season, posting 50/40/90 splits for the first time in his career.

Currently, Gilgeous-Alexander leads the league with the best odds to win Most Improved Player at -175 odds at the best NBA betting sites.

If Gilgeous-Alexander can keep this up, he might catapult himself from a candidate for Most Improved Player into the NBA MVP conversation.

Against the Wizards, Gilgeous Alexander tied his career-high in points with 42.

Gilgeous-Alexander capped off his amazing performance with a step-back three-point game winner of the Wizards with 1.9 seconds left on the clock. The Thunder won 121-120.

The win over the Wizards marked the 10th time in 14 games that Gilgeous-Alexander scored at least 30 points.