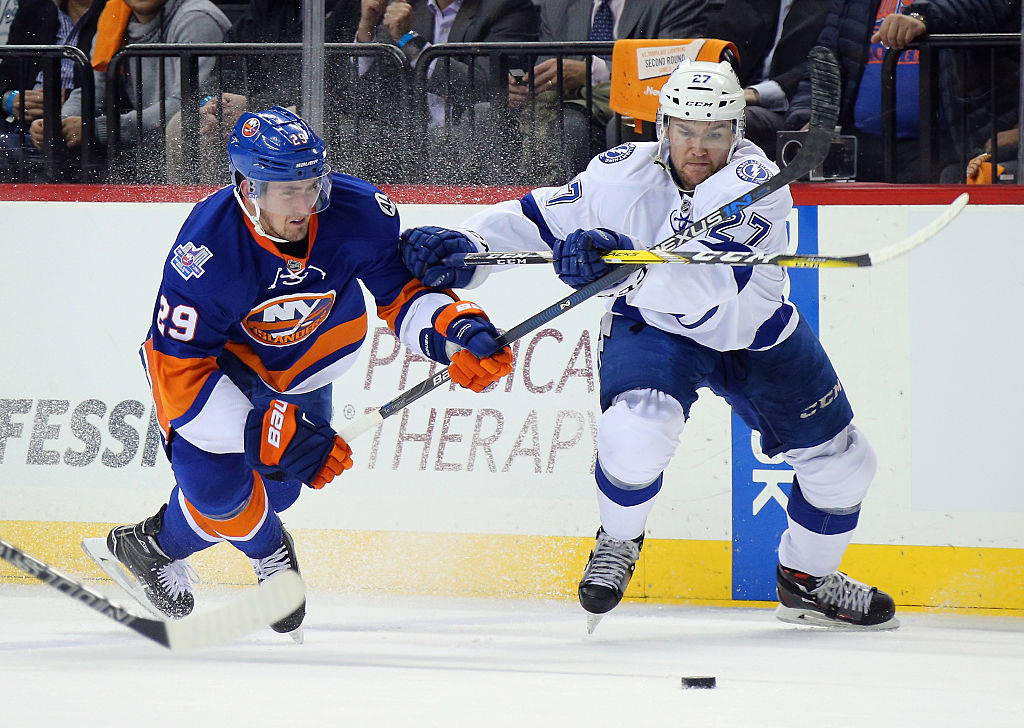 The National Hockey League has made it a priority to clamp down on slashing after several incidents last season and through the first few games of the preseason the number of slashing calls has been extremely high. On Monday night there 49 slashing calls across the league, with nine called in the Islanders 1-0 overtime loss to the New York Rangers.

“I think you just have to be a little bit smarter,” Jordan Eberle said before Wednesday’s game. “You have to be able to control your stick a little bit more I think. I only played one exhibition game, like everyone here, but it seems the common theme through the exhibition games so far. There’s just been a tone of penalties. A lot of stuff on the hands and I like it.

“They took away the grabbing and that’s kind of what took over after, so you have to be able to control it a little. Maybe it will prevent some injuries a little bit more and it will create more offense.” While Eberle doesn’t seem to mind the new emphasis on the rule, others haven’t been overly thrilled with it. One person in particular was Islanders head coach Doug Weight. The Islanders bench boss was visibly upset after several calls against the Islanders on Monday night at Madison Square Garden.

Wednesday ‘s game in Brooklyn did not see as many calls as the previous one. There were only a combined three slashing calls all night, two of which were against the Islanders.

“I think they let some stuff go a little bit, but it’s a fast game,” Weight said. “I don’t if they’re not seeing it. The faceoff to me just boggles my mind. It just slows the game down and it’s awful tough to break those habits if you only play in two or three games, but I get it. I think it’s going to get better. I hope it does.

Prior to the Islanders 3-2 win over the Flyers at Barclays Center Weight also addressed the topic with reporters and the challenge of changing the way players play the game.

“I just think 10 years ago, 12 years ago, 15 years ago whenever it was that I could no longer use my free hand,” Weight explained. “What it created, and think about this, is guys have two hands because they don’t want to have a free hand. They start tapping. It’s been taught for 15 years because of that rule change and a couple of clips you see somebody breaks a finger it should be called, but they’re missed.

“Call those, but these taps it’s engrained in their head. It’s not just something they can stop doing that easily.”

The crackdown has also forced some guys to change their strategy inside the faceoff circle. The NHL is also trying to prevent “cheating” during faceoffs and officials have been stricter with making sure players are staying perfectly within the redlines in the circle.

That has also been an adjustment for the team’s centers, who have been forced to change their approach.

“Now they’re pretty strict. They don’t want you touching the lines at all,” Brock Nelson said. “Before as long as there was a little bit of space for the ref to get in there and drop the puck they were fine. Now they kind of want you to back off a bit. Sticks are pretty strict. You can’t really move them.”

Nelson said that a few of the Centers have had discussions about faceoffs and the coaches worked with a few players on the ice on Wednesday.

“We’re going to go over film and have some ideas,” Weight said. “We appreciate it. It’s just more work for us to do and we have to be on it. We want to play with the puck. And traditionally the last two, three years we’ve been a 40 something (faceoff) percentage. It’s been gross so far these first two games… We need to be better.”

The Islanders have four more preseason games left on the calendar, so there is time for the players to work on adjusting to the new enforcement of the rules. Still, Cal Clutterbuck, much like Weight, hopes there is a happy medium that is reached with the penalty calls. Especially when it comes time to the playoffs.