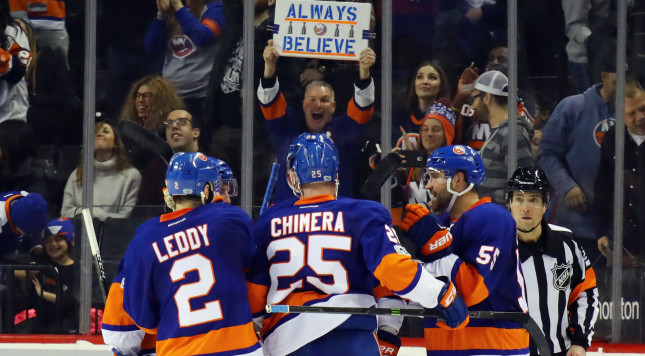 NEW YORK – The Islanders needed to beat a struggling Colorado Avalanche team on Sunday evening, and they did just that by coming away with a 5-1 win at Barclays Center.

New York’s offense exploded during the 60-minute affair, with the Islanders scoring five answered goals before the final buzzer. Three goals came in the third period alone, as Anders Lee scored at 1:21 and 11:22 and Jason Chimera added a goal with 6:12 left in the game.

“We played a pretty good game tonight. Anytime you put in five goals it’s a good offensive effort,” Anders Lee said, who scored his 20th and 21st goals of the year on Sunday. “We played well and (JF) Berube played a great game as well. Nice to come back after getting shutout yesterday and get two points.”

The Islanders moved within one point of the final wild card spot in the Eastern Conference with the win and saw two Islanders reach milestones in the process. Lee reached the 20-goal mark in the regular season for the second time in his career and Nick Leddy, who had two points on Sunday (one goal, one assist), recorded his 200th career NHL point.

Despite coming away with the win, the Islanders started off the night behind the eight ball.

Joe Colborne gave Colorado the 1-0 lead 8:12 into the first period. Colborne was able to get in front of Berube by himself and put the puck past the extended leg of the Islanders netminder.

The Avalanche’s lead lasted less than four minutes before the Islanders evened the score. Moments after Pickard made several big stops on New York chances, Nick Leddy was able to sneak one by the Colorado goalie. Leddy fired a shot from above the faceoff circle that beat Pickard at 12:01 of the first.

The Islanders grabbed the lead in the second period while the avalanche had two men in the box. Some quick passing from Leddy to John Tavares to Ryan Strome led to an Islanders power play goal, and a 2-1 lead.

The assist by Leddy was the defenseman’s 200th career NHL point and his 14th point (four goals, 10 assists) in his last 15 games.

The Islanders made it 3-1 less than two minutes into the third off Lee’s first goal of the game. Lee scored again at 11:22 with the Islanders on the power play.

“It was an absolute gift from Johnny on that first (goal),” Lee said. “Both him and Boychuk had a great play on that and I was just the beneficiary at the end of the play. I can’t say enough nice things about Johnny (Tavares). The reason why we’ve climbed our way out of this is cause of his leadership and his play on the ice.”

Jason Chimera scored the Islanders fifth goal of the game at 13:48 of the third period.

Sunday was a much different result than the previous day when the Islanders were shutout by the Ottawa Senators. New York kept the pressure on the Avalanche and never took their foot off the gas when they grabbed the lead.

“We did a good job of working hard and finally drawing some penalties,” John Tavares said. “Able to get a lead and any team that’s had the year that they’ve had you want to step on their throat sort of speak when you get the opportunity. You don’t want to give them any life. We did a good job of that early in the third.”

The Islanders continued their trend of beating opponents from the Western Conference and are now 8-2-1 when playing teams from the west at Barclays Center. The Islanders also moved to 24-5-3 when scoring three or more goals against an opponent.

Berube made 26 saves in the win over the Avalanche, which included several tough stops throughout the night. The win on Sunday helped redeem Berube, who gave five goals to the Carolina Hurricanes in has last outing earlier this month.

“When you have a bad game you want to bounce back,” Berube said. “I think it helped me to work hard in practices and kind of go back to basics. That’s what makes me successful, when I don’t try too much.”

The Islanders will have Monday off before leaving to play Toronto on Tuesday. With one point separating the Islanders and Maple Leafs there is once again a lot of the line when two teams meet.