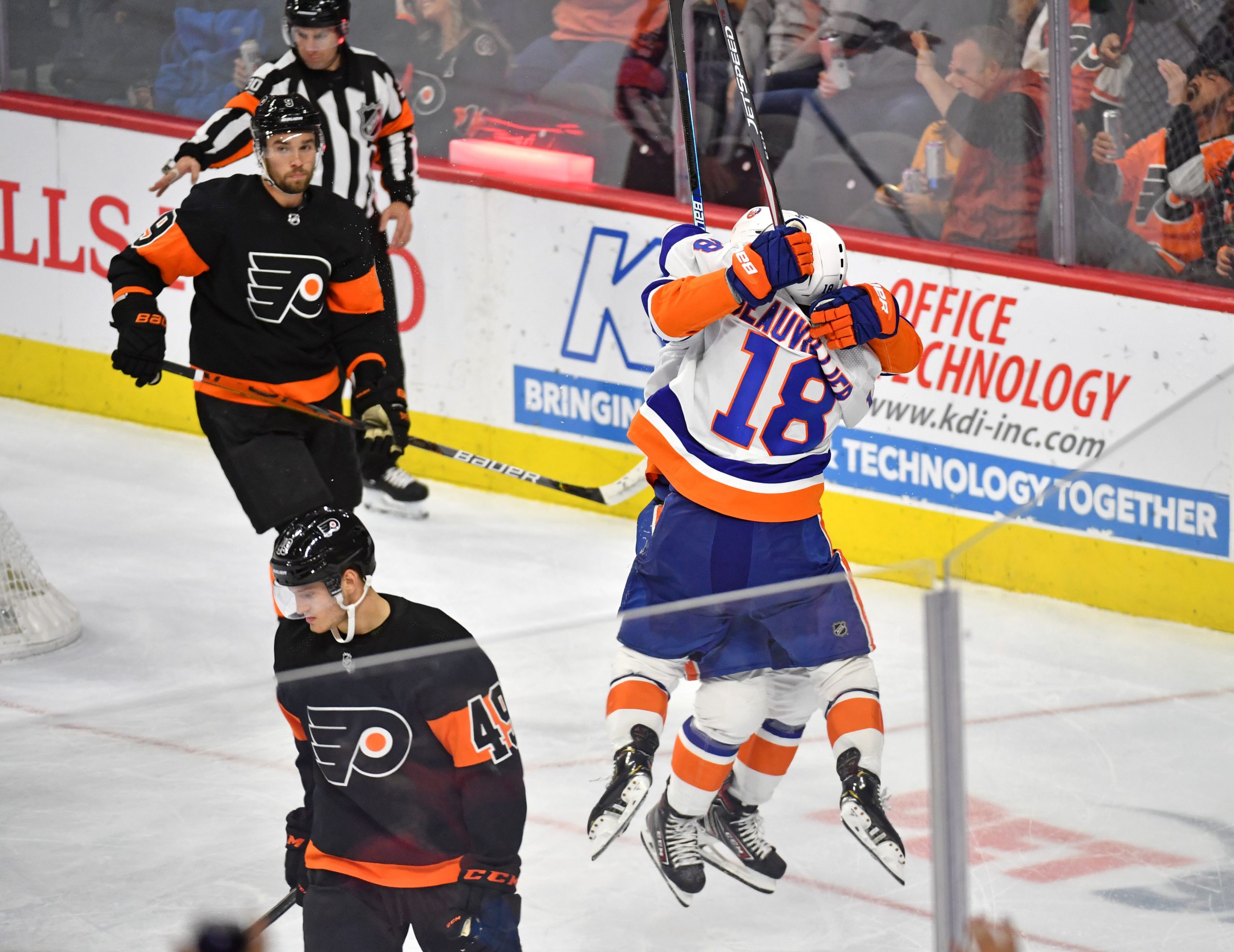 PHILADELPHIA, PA — There just doesn’t seem to be any quit in the Islanders.

Down 3-0 in the third period, the Islanders scored three unanswered goals and defeated the Philadelphia Flyers 4-3 in the shootout, extending their point streak to 14 games. It was Anthony Beauvillier, who finished the night with two goals, that found the game-tying goal with under five minutes left in the game.

Beauvillier skated through the slot and threw a backhand shot on net, which found its way through Brian Elliott and into the net.

“I was just trying to get it on net,” Beauvillier said about the goal. “I thought (Derick Brassard) put it in and he just looked at me, ‘no I didn’t touch it.’ It’s a good bounce you’re just happy to have when they come.”

Jordan Eberle and Mathew Barzal, who also scored the Islanders’ second goal of the night, each scored in the shootout. Thomas Greiss stopped both Flyers shooters he faced.

The victory moved the Islanders to 13-0-1 over their last 14 games and highlighted the resiliency that they’ve shown over their point streak.

“It just shows that we’re never out of a game,” Casey Cizikas said. “We’re going to continue doing what’s made us successful to this point and we’re going to chip away. That’s what we did tonight. It’s a huge team win, it’s a great comeback and I think we’re happy leaving here.”

Considering the way things started for New York, they should be very happy with the two points they picked up on Saturday night.

Despite holding the Flyers to just a single shot for a little over 10 minutes of the first period, the Islanders found themselves behind early in the game. Sean Couturier buried the Flyers’ first shot of the night 1:38 into the first period to put Philadelphia ahead 1-0.

The ice began to tilt early as the period progressed and the Flyers managed to add one more goal with 23.1 seconds left in the first. And even when the Islanders seemed to be gaining momentum in the second period, the Flyers scored on just their second shot of the middle frame to make it a 3-0 game.

For a time it seemed like the Islanders couldn’t buy a goal. At one point, Cizikas managed to beat Elliott, but the shot still rang off the post and stayed out.

“It happens. Hockey is a funny game,” Cizikas says.

"Lots of leaders. Lots of character in this locker room and once again we showed that. Everyone is just sticking together and we’re family. It’s been a fun season so far, we want to keep that streak going for sure." – Beauvillier pic.twitter.com/h7hOh5uzjk

The Islanders finally did crack Elliot, with Beauvillier backhanding the puck five-hole at 7:46 of the third. Barzal scored his team-leading ninth goal of the year at 13:34.

“What I like about (the win) for us was we didn’t deviate,” Islanders coach Barry Trotz said. “We just kept doing what we were doing and staying with it. We knew if we got one the (dam) would break a little. That’s the way we felt on the bench. …

“We didn’t get frustrated, we didn’t deviate, we didn’t quit. We just stayed in the fight and we’re sitting here with an extra point again.”

Thomas Greiss made 28 saves in the Islanders’ third consecutive win and picked up his eighth victory of the season.

With the win on Saturday, the Islanders have now managed to go over a month without a regulation loss. The last time the Islanders suffered a defeat in the span of 60 minutes was back on Oct. 11 against the Carolina Hurricanes.

“Lots of leaders, lots of character in this locker room,” Beauvillier said. “Once again we showed that and everyone is just sticking together. We’re family and it’s been a fun season so far.”