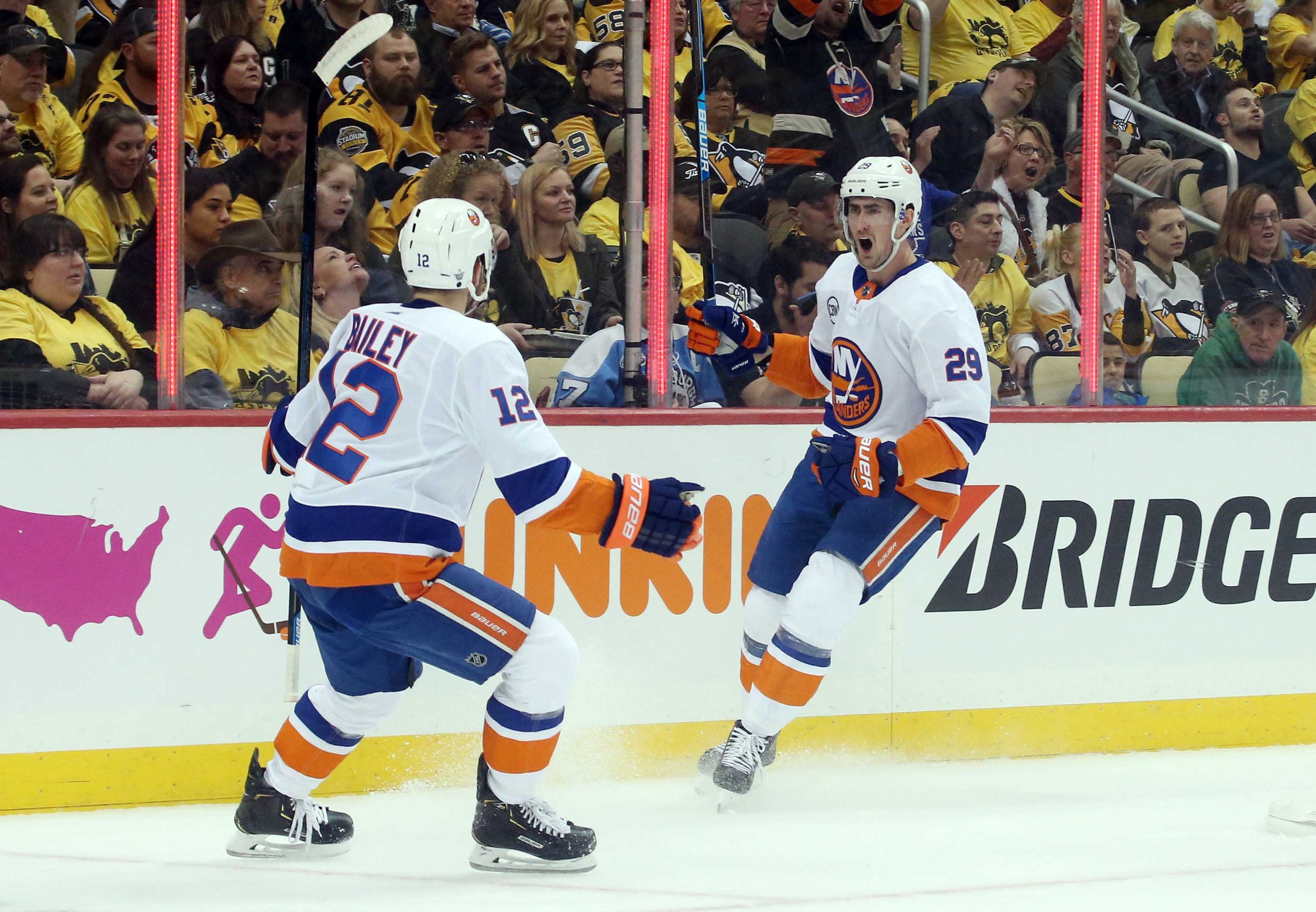 The Islanders moved one game closer to knocking the Pittsburgh Penguins out of the playoffs on Sunday with a commanding 4-1 win in Game 3.

The Penguins led for a mere 28 seconds before a 62-second span swung the tide of the game. Jordan Eberle scored his third goal of the playoffs at 13:22 of the first period on a sharp angle shot that just snuck by Matt Murray.

Brock Nelson put the Islanders in front at 14:24 with a quick wrister that found the twine. Nelson forced Sidney Crosby to turnover the puck in the Islanders zone and then Tom Kuhnhackl was able to push the puck back towards Nelson, who charged up the ice.

“We’re just sticking to the process… sticking to our guns,” Nelson told reporters in Pittsburgh. “It’s playing tight defense, good goaltending, and getting a lot of offense from a couple different guys.”

Leo Komarov and Anders Lee also scored for the Islanders in the win, and Robin Lehner made 25 saves.

It was another outstanding defensive effort by the blue and orange that frustrated the Penguins’ shooters and kept the even-keeled Isles in the driver’s seat for most of the game. The Islanders finished the afternoon with 23 blocked shots and four takeaways.

The Islanders also held the Penguins to just 26 shots through 60 minutes, which was the fewest shots on goal the Isles have allowed in the series.

“This group is not afraid of work, not afraid of competition, they are not afraid of a whole lot,” Trotz told the media. “They go out, and just do their job. … We just understand that we have a certain structure and certain way we do things, that’s why we have success.”

"It starts with a care for each other. We get rid of all the me first. It's we instead of me. That's what we've talked about since day one of training camp." #Isles pic.twitter.com/mPrgkfEGJN

For the third playoff consecutive game, Crosby was held without a single point. It’s the first time that’s happened since June 4-9, 2016, according to Sportsnet.

The 3-0 series lead is the 10th one in the Islanders’ history and it’s the first time they’ve had one since the 1983 Stanley Cup Final. The current situation the Islanders find themselves in shouldn’t surprise anyone, according to Lehner.

“We got 103 points in the standings. It can’t be a surprise,” Lehner said, according to Newsday. “This team was no fluke this year. Everyone looks and compares players. I look at our roster and see a lot of really good players and I see a really good organization and great coaching and great defensemen and a lot of heart. So, it shouldn’t be a surprise.”

Komarov scored his first goal of the postseason at 10:27 of the third period to give the Islanders some room to breathe. Lee’s empty-net goal at 18:32.