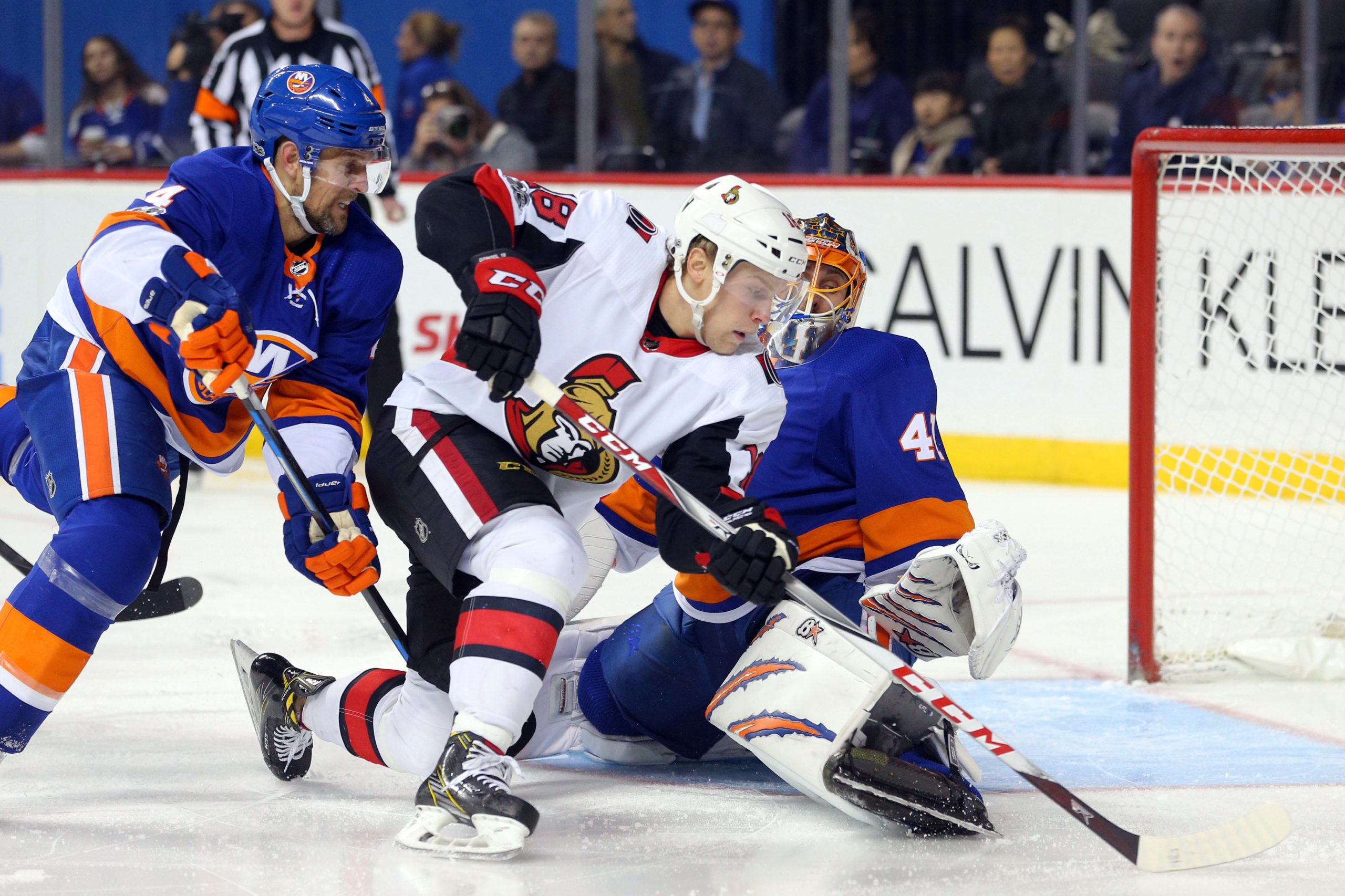 NEW YORK — There were a combined 10 goals in the first 40 minutes of the game between the Islanders and Ottawa Senators, but it was the game’s lone goal in the third period that meant the most and ended a four-game winning streak the Islanders had held.

The loss was also the Islanders first in regulation at home this season.

The Islanders failed to clear the puck out of their zone during an early third-period penalty kill. Thomas Chabot fired a shot from the point that was stopped, but Ryan Dzingel picked up the rebound and swept it by Jaroslav Halak for what turned into the game-winning goal.

The game had been a track meet of a match, with Dzingel scoring his first goal of the game at 8:32 of the first period to give Ottawa the 1-0 advantage. Less than a minute later Zach Smith found the back of the net to put the Senators up 2-0.

Ottawa’s lead only lasted for several minutes before Anthony Beauvillier recorded his third goal of the season to bring the Islanders within one at 12:13 of the period. Anders Lee evened the score at two at 14:27 with his 14th goal of the year, but the Senators pulled regained control of the game with a late goal from Bobby Ryan.

The Chaos continued into the second when Anders Lee scored to tie the game 3:01 into the second period. Andrew Ladd gave the Islanders their first lead of the night just over a minute later. Thomas Chabot scored at 8:26 of the second to give Ottawa back the lead, but Jason Chimera tied the game yet again on a breakaway goal 14 seconds later.

1. To best describe Friday’s loss to the Senators I’d have to borrow a word New York Times hockey Writer Allan Kreda likes to use in these situations; Whacky. Between the two sides scoring 10 goals in a 40-minute span, neither goalie looking sharp, Jason Chimera finally scoring his first goal of the year over a quarter of the way through the year and the flurry of chances the Islanders had at the end of the game whack is the best way to describe Friday night. From a fan standpoint, it was an entertaining evening for the 11, 797 that made it to Barclays Center.

I’m sure they would have liked to see the Islanders continue their regulation home unbeaten streak, but they got their money’s worth in terms of excitement.

2. Alright, the best place to start when looking at tonight’s game is between the pipes. To say that this is a game Thomas Greiss would like to forget is an understatement. The Senators threw 25 shots on net during Greiss’ 26:42 of playing time and saw five of those get by him. Now not all of this should be put on Greiss’ shoulders either, the Islanders didn’t much, at times, to help their man in net.

For instance, on the Senators’ first goal of the game, Dzingel managed to slip by Jason Chimera without much resistance and get the breakaway opportunity. The Bobby Ryan goal — Ottawa’s third goal in the first period — was a bit of a fluky goal with Dion Phaneuf’s centering pass just bouncing off the skate of Ryan and into the net.

Still, Greiss seemed like he was fighting the puck for most of his time in net and Mike Hoffman’s goal — the final one Greiss let up before being pulled in the second period — was one the veteran goaltender should have stopped, but appeared to read the shot wrong. 3. “Every once and a while things just don’t go your way,” Greiss said about his performance. “You just have to respond. You can’t always end good and probably next game…we’ll have another game again.” Greiss’ demeanor doesn’t change whether he comes away with a win or loss, so it’s hard to tell where his confidence level really was after the game. If history is any indicator, then I would say he will be OK going forward.

Thursday was the third time Greiss surrendered three or more goals and after the previous occasions, he has bounced back with a win in his next start.

4.  Jason Chimera and John Tavares both described the Islanders’ performance as sloppy after the loss. “Sloppy in our own end at times and with the puck,” Tavares said in a brief media session after the game. “When we weren’t sloppy we were pretty good. We just have to clean up and mistakes were made, and being careless at times.”

It was those careless decisions that cost the Islanders in the end. The team’s failure to clear the puck in the third while down a man helped lead to the Senators game-winning goal less than two minutes into the third period. Earlier in the game, it was Alan Quine’s turnover in the neutral zone that set up the Sens for their first goal of the night.

5. “I think we created a lot of rushes for them. A lot of room for them from some decisions. (Greiss) is gonna wanna make some of those saves. It was kind of a weird day, but kind of both teams kept both teams in it I felt as the game went on. It’s just disappointing that it’s a winnable game that we fought back… I don’t think it was a pretty game either.” — Doug Weight on the game.

6. On a positive note, Weight had been looking for contributions from his third and fourth line and got that on Friday with goals from Beauvillier and Chimera. The Islanders coach had mentioned after last game how the scoring from the top two lines had allowed the bottom two lines’ lack of production fly under the radar and had wanted to see more out of them. They responded and Chimera, who scored his first goal of the year, looked as though he might have had the game-winner.