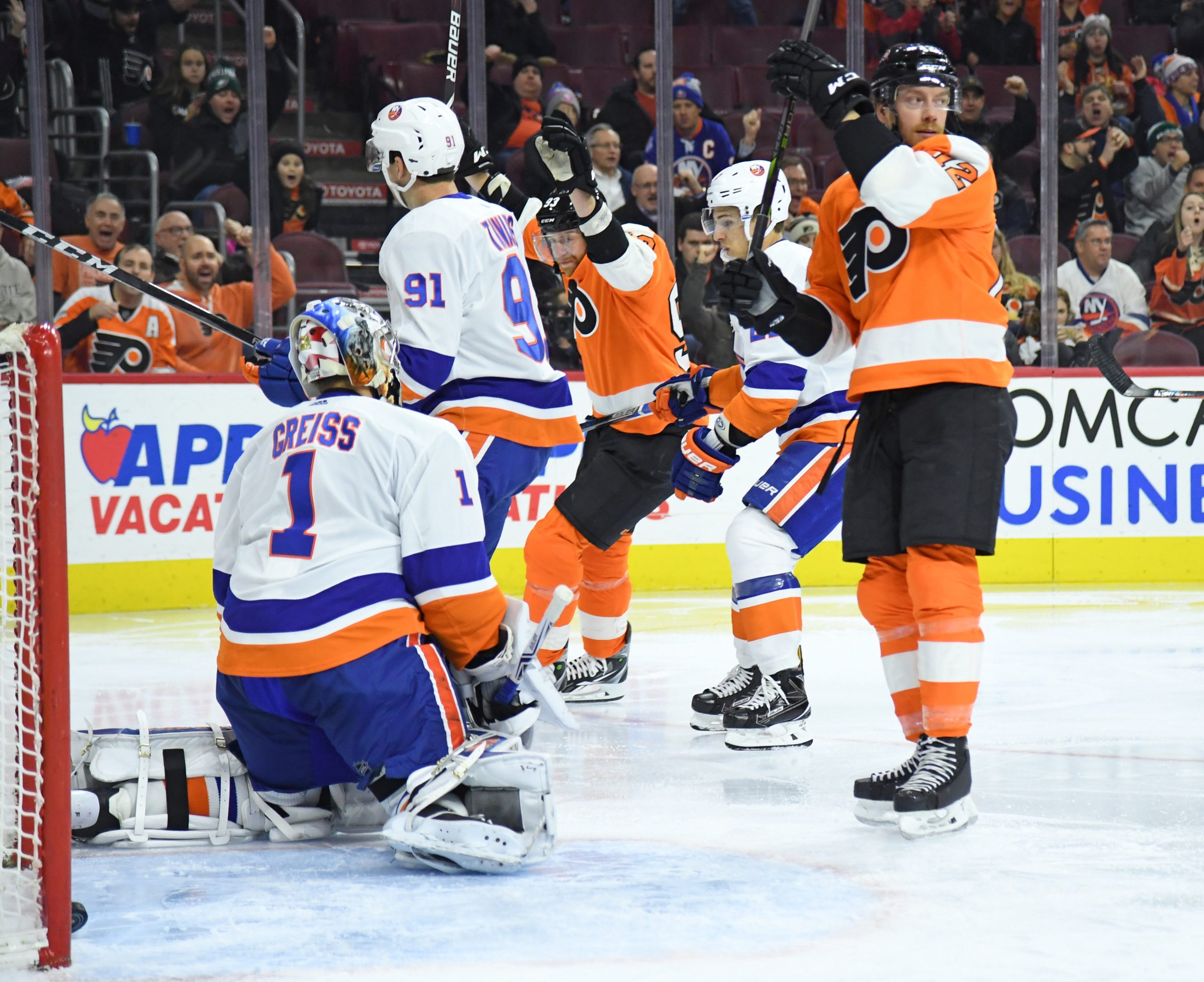 A four-goal second period by the Philadelphia Flyers sunk the Islanders and led to a 6-4 defeat on Thursday night at Wells Fargo Center. The loss extended the Islanders’ losing streak to four games and pushed them further back from the final wild card spot in the Eastern Conference.

A span of 4:48 saw the Flyers break a 1-1 tie to start the second and effectively bust the game wide open.

It was Michael Raffi’s deflection goal in front of the net at 1:36 that kicked things off for Philadelphia. The Flyers put themselves up by two 40 seconds later when Wayne Simmonds put a loose puck past Islanders’ starter Thomas Greiss.

Ivan Provorov capitalized on a power play at 6:24 when beat Greiss with a wrister from the top of the slot. Cal Clutterbuck scored his second goal of the game at 12:26 of the second, but the Flyers answered right back with a goal from Travis Konecny just over a minute later.

John Tavares cut the Flyers lead to 5-3 when he scored a power-play goal at 6:02 of the third period and Ryan Pulock pulled the Islanders within one at 14:35, but it wasn’t enough to overcome the hole they put themselves in earlier.

Provorov scored an empty-net goal with 12.6 left in the game to seal the win.

Clutterbuck had the Islanders first goal of the night and Greiss finished the game with 26 saves. Thursday was the second start in a row where Greiss has surrendered five goals or more goals to an opponent.

Philadelphia had scored the game’s opening goal at 8:38 from Sean Couturier, but Clutterbuck scored his first of the game at 15:37 to even the score.

1. The Islanders fought back in the third, but they sure dug themselves a hole in the first 40 minute on Thursday night. They were outshot 25-14 in the first two minutes and surrendered five goals before the second intermission. The Islanders had their miscues with the puck, looked out of whack when they fell behind and their goaltender surrendered five goals for the third consecutive game.

2. Thomas Greiss has struggled and tonight wasn’t that much different. In fairness, he did make several tough saves in the second and third period, but his five goals against can’t be ignored. It was the fourth time in five starts that Greiss has surrendered five or more goals and it was the sixth time he has done it this season during a start.

Islanders goaltending has struggled this season, owning the second worst team save percentage in the league and the highest goals against per game average in the league. Jaroslav Halak has been the better of the two and Thursday’s start by Greiss — his first since December 19 — won’t help his case one bit.

3. The Islanders continued to struggle in their own end, chasing the puck and failing to clear their own end when they did manage to get possession of the puck. The penalty kill unit also struggled on Thursday and allowed two goals to the Flyers. The Islanders PK has surrendered five goals against in the last four games.

4. The Islanders losing streak has now jumped to four games and in the larger sense, the team is 5-10-2 since the start of December. It has begun to wipe out the impressive 15-7-2 start the Islanders had this season and raised questions regarding the team’s playoff hopes. While the Islanders have remained one of the best offenses in the league, their goal scoring has come crashing down as of late.

5. If you’re looking for a positive from Thursday it’s the fact that the Islanders finally managed to show some fight and battled back from their 5-2 deficit in the third. The Islanders have been listless during their losing streak, usually letting their opponent control the game once they jump out to a lead. However, against the Flyers, the Islanders put their foot on the gas and scored three times in the third to make things interesting.

Islanders head coach Doug Weight called on his team to be less frail following practice on Wednesday and he told MSG’s Shannon Hogan after the game that the loss to the Flyers may be their best loss of the season. In a span of games that saw the Islanders be outplayed — badly on some nights — seeing the team fight back is a step in the right direction. With the Pittsburgh Penguins coming to town on Friday night, the Islanders can use the positivity heading into another important divisional matchup.

6. Speaking of fight, it’s not too often that Josh Bailey’s name and fight go together, but they sure did on Thursday. The Islanders’ forward dropped the gloves in an effort to defend a teammate late in the third period. The bought appeared to go to Sean Couturier, but considering Bailey hadn’t fought since the infamous February 11, 2011 brawl game against the Pittsburg Penguins give him credit.

Jordan Eberle also dropped the gloves for the first time in his career in the third period of Thursday’s loss.